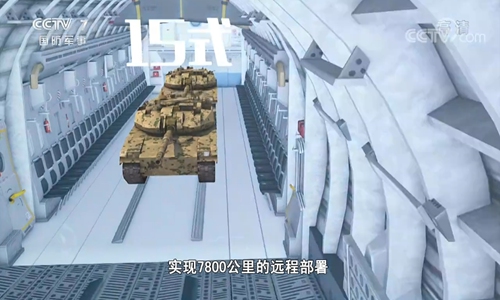 By using this combination, China can quickly send powerful armored reinforcements into difficult environments at high elevations, among mountains or in water-rich locations, they said.

Thanks to the Type 15 tank's light weight of about 30 tons, a Y-20 can carry two of them at once and achieve long-range deployment of 7,800 kilometers, state broadcaster China Central Television (CCTV) reported on Wednesday, revealing this combination for the first time.

The Y-20 can also carry one Type 99A main battle tank, which weighs about 50 to 60 tons, but this new combination can enhance the Chinese military's strategic transport capability by offering different tactical choices, Fu said.

The lightweight Type 15 is designed to efficiently operate in difficult terrains at high elevations, in mountainous regions and water-dense areas, where a heavy tank like Type 99A may not perform at full potential, Fu said, noting that two lightweight tanks can also outperform one heavy tank in some combat scenarios.

Multiple Y-20s can also transport a mixture of Type 15s, Type 99As and other kinds of armored vehicles, leading to a significant improvement in China's long-range rapid deployment, Fu said.

China has a vast territory, and having a good aerial transport capability will optimize the military's power and structural deployment, military expert Ge Lide said on CCTV.

The Type 15 made its public debut at the National Day military parade on October 1, 2019 in Beijing, and some Type 15s were deployed in exercises in the plateaus of Southwest China's Tibet Autonomous Region in January 2020.

The Type 15 tank is the world's only modern lightweight tank in service, Chinese military magazine Weapon reported in 2019, noting it is equipped with a 105-millimeter gun and advanced sensors that can "devastate enemy light-armored vehicles in regions not suitable for heavy main battle tank deployment."