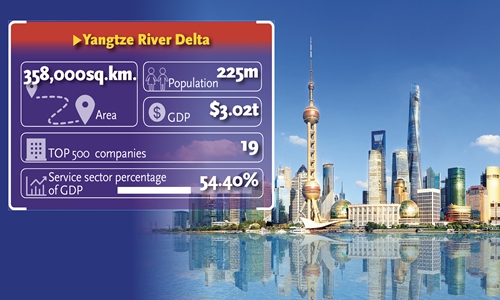 By rolling out a plan to integrate a cluster of cities located in East China, often known as the Yangtze River Delta, China is to develop this mega-regional economy into a base camp for new growth momentum, centering on high-quality manufacturing and services to fuel economic growth.

The plan is widely seen as another push by the Chinese government to drive economic growth by building up regional blocs, at a time when the country faces challenges from slowing growth and bumpy trade relations with the US.

The Yangtze River Delta integration plan covers Shanghai and the three neighboring provinces of Jiangsu, Zhejiang and Anhui, all in East China. Home to internet leaders like Alibaba, Pinduoduo and numerous smaller private companies, the region is one of the Chinese economy's crown jewels, contributing more than one-fifth of the nation's GDP in 2018.

"Through the integration plan, the Yangtze River Delta's proportion in China's total economic aggregate will increase," said Shi Jianxun, an economics professor at the School of Economics and Management of Tongji University.

According to Shi, the Yangtze River Delta will become a hub of cutting-edge technologies and high-technology enterprises, which will be converted into enormous economic benefits in the next decade.

"Just take the Shanghai-based Lingang Special Area, for example. It is expected to produce billions of GDP in the next 15 years," he told the Global Times on Wednesday.

The plan specified that the region should jointly enhance its innovation abilities and make breakthroughs in key technologies. The plan also demanded that the region nurture leading enterprises with global competitiveness as well as developing the industries of the future, such as third-generation semiconductors, next-generation artificial intelligence and genetic testing.

"Local governments have already invested in large-scale scientific equipment in Shanghai and Anhui. Such government impetus, along with talent and education resources, should nurture high-tech industries," said Chen Liu, a research fellow at the Nanjing-based research institution Yangtze IDEI.

"The region will also engage in technological competition and industrial chain competition with overseas industry clusters like the Silicon Valley," said Shi.

Previously, China rolled out blueprints to integrate the Greater Bay Area consisting of Hong Kong, Macao and Guangdong in South China, as well as the Jing-Jin-Ji area consisting of Beijing, Hebei Province and Tianjin in North China.

Experts said that the Yangtze integration plan will stimulate a higher level of economic cooperation in the region, speeding up industrial chain labor division while boosting cross-industry cooperation.

Chen said that the integration plan will give rise to "vertical" industry cooperation, meaning that different cities would be responsible for different links on certain industry chains based on their unique advantages.

"For example, Shanghai will be responsible for research and development, while manufacturing could be based in Jiangsu and Zhejiang," he said.

Many enterprises are already moving in this direction. Ningbo-based automobile parts company Joyson Electronic, for example, is expanding its research and manufacturing centers in the Yangtze River Delta region.

"Our company is building a research center in Shanghai to better interact and collaborate with leading vehicle makers clustered in the city," Zhang Chuanqing, head of media relations at Joyson, told the Global Times on Tuesday.

He added that being closer to Shanghai would also benefit his company, which is committed to researching and producing intelligent driving systems, as Shanghai is developing quickly in the new-energy vehicle industry.

Compared with the Greater Bay Area, the Yangtze River Delta has a wider range of mature industries and can thus intensify cross-industrial cooperation.

"For example, Hangzhou's advantages in e-commerce can help fuel manufacturing industries in Yiwu from East China's Zhejiang Province, while Shanghai's financial institutions can work with banks in Anhui to lend more support to local agricultural projects," Ye Hang, an economics professor at the College of Economics of Zhejiang University, told the Global Times.

Shi further suggested that the local governments in the area remove market barriers by unifying public services, like social security, as well as speeding up the improvement of the intra-provincial transportation network, especially in less-developed northern Jiangsu, to facilitate talent and capital flows.