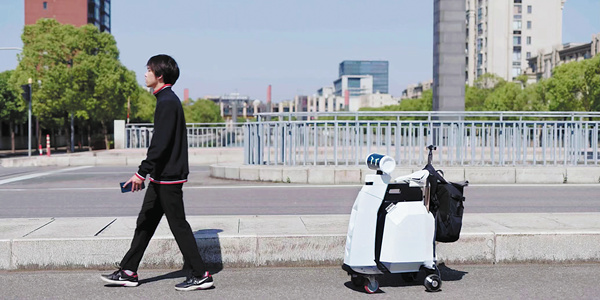 From robots to aircraft, a new generation is providing thrust for innovation, Wang Qian reports.

While most people were stuck at home last year due to the COVID-19 pandemic, feeling isolated and maybe even caged in, some young people were thinking outside the box and reached for the sky as they created an impressive array of work, from robots to rockets.

It's difficult to predict what will be the next big thing to materialize from this tech-savvy generation. On videosharing and livestreaming platform Bilibili, it seems that anything is possible. No dream, it seemed, was beyond imagination. At first, they did not know each other but were united by a spirit of creativity.

When Bilibili uploader Lin Xiao, nicknamed Lingshiqi online, had too many bags to carry, instead of asking someone for help, the then 18-year-old spent 200 days addressing the problem. The devil was in the detail you could say. He built a robot, which can follow him wherever he goes, and upon which he can ride. The robot's name? Devil!

Tech influencer Peng Zhihui, whose online handle is Zhihuijun, is already a household name. A 16-minute video clip features the 28-year-old Huawei engineer designing and creating a robotic arm, named Dummy. Powered by Huawei's 5G technology, it can be remotely controlled to do the most precise activity. To prove it, Dummy can even stitch grape skins together.