‘A stroke of luck’ to be on global cruise during pandemic 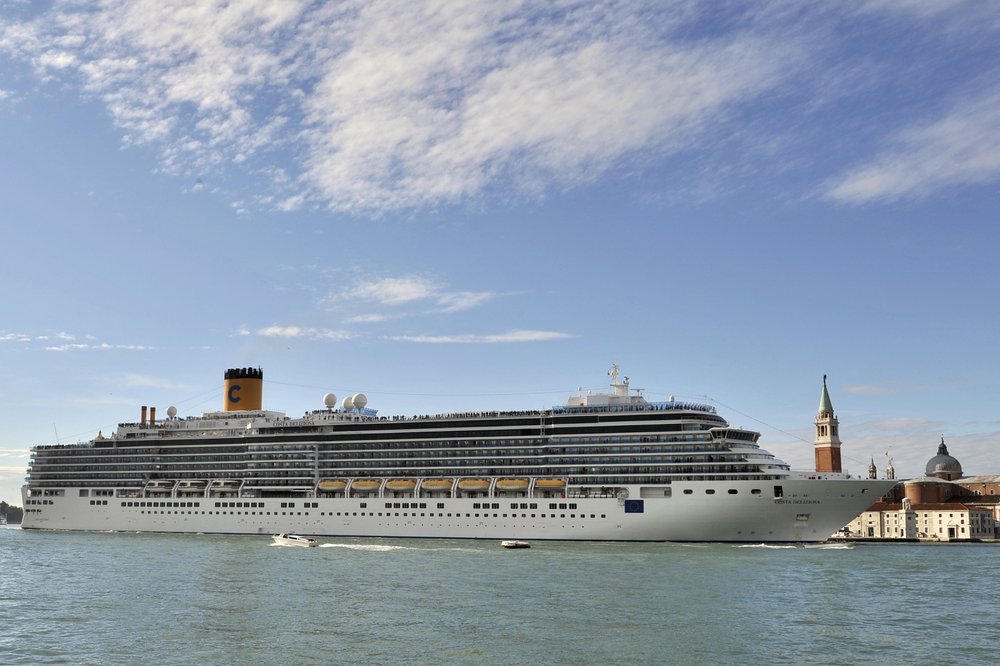 In this photo taken on Sunday, May 24, 2015, the Costa Deliziosa cruise ship sails past St. Mark's Square, visible in the background at right, in Venice, Italy. (Photo: AP)

For Spanish traveler, Carlos Payá, being on an around-the-globe luxury cruise while the rest of the world scurried into their homes for fear of the COVID-19 pandemic was beyond surreal. It was “a stroke of good luck.”

Now, his trip inside the virus-free bubble that the Costa Deliziosa cruise ship became on its 15-week odyssey is coming to an end. The boat is steaming toward Barcelona, Spain, where it will make its first port-of-call on Monday after 35 days of continuous sailing with no human contact with the outside world.

“It was not surreal. It was incredible,” Payá told The Associated Press by text messages on Saturday evening. ¨We have family in our home countries. The news that was arriving from home was causing us all a lot of worry and grief. For us, it was a stroke of good luck to be where we were.”

Payá, who was traveling with his wife, said when news started to reach the boat of the rapid spread of the coronavirus in their native Spain, their first desire was to get home to their two grown children in their hometown of Valencia.

But with ports denying the boat entry, they have had to temper their concern with the amenities on board.

Unlike other cruise ships that suffered outbreaks and were often put in quarantine to protect port cities, the Deliziosa has found no cases of the COVID-19 virus, according to its owner, Italian cruise company Costa Crociere. So the boat’s 1,831 passengers were free to use the ship’s facilities and entertainments.

He said that the passengers’ last chance to touch land was in Perth, where they docked after “70 wonderful days” of crossing the Atlantic and Pacific oceans. That was when the U.N. World Health Organization alerted the pandemic in March. From that point, the ship made only technical and refueling stops, before the journey back toward the Mediterranean, which took it through the Suez Canal, according to the company.

“Of course, for those of us who have children in Spain, we would have preferred to return,” Payá said. “Other passengers, on the other hand, given their old age wanted to stay on board knowing that the boat was safe and secure.”

A company spokesman said a passenger left the ship earlier in the week in Marsala, Sicily, for health issues and had a COVID-19 test, which was negative. Costa said the passengers were confined to their cabins only for the period until the ship heard back that the ill guest who got off in Sicily had tested negative. It didn’t say how long that period lasted.

The Deliziosa, a nearly 300-meter (1,000-foot) vessel, will disembark 168 Spanish passengers on Monday at Barcelona’s port. Then the Deliziosa will head to its final destination, Genoa, Italy, where it is expected to let off the remaining passengers, Italians and those of other nationalities, on Wednesday. The Deliziosa was originally due to return to Venice on April 26.

French authorities had rebuffed a request by Costa for permission to disembark several hundred passengers from France and nearby countries at Marseilles. “The health situation on board the ships, with 1,814 guests and 898 members of the crew, doesn’t present any problem for public health and no case of COVID-19,” Costa’s statement said.

While people infected with coronavirus often experience mild or moderate symptoms, possible complications like pneumonia can put their lives at risk.

Passenger Jean-Pierre Escarras, from Marseilles, shot a video of their cabin that their daughters shared on social networks, in which he says: “This is our place of confinement. We are lucky to have a window.”

The couple said that after a stop in Sydney, the ship’s activities were “reduced or sometimes canceled. We haven’t been able to get out on land since March 14 – that’s 34 days.”

The passengers said that ports in Oman, along the Suez Canal, as well as in the Seychelles and Indian Ocean ports, refused to let the ship dock.

The company said, because the ship is Italian-flagged, it followed Italian precautionary measures used in the pandemic, including safety distancing between guests such as managing the numbers of who could enter food areas at any one time and transmitting entertainment to cabin TV sets.

A French woman whose in-laws are aboard the Deliziosa garnered about 100 signatures on an online petition to urge the French government to intervene to get them home.

The French administration has granted exemptions to six other cruise ships in recent weeks to allow French passengers to get off, but refused this time, saying the previous stops overstretched local police and health authorities already mobilized to fight France’s severe virus crisis.

Last month, two other Costa cruise ships pulled into Italian ports, including one that earlier had aboard passengers who tested positive for COVID-19 before being disembarked in France.

It is unclear if or where the passengers who were due to finally step on land after weeks of sailing aboard the Deliziosa would be quarantined as a precaution.

What is clear is that Payá and the other passengers are returning to a new reality of home confinement, face masks, and even more worry.