TRAVEL 'Adapt and survive' as Galapagos girds for life without tourism

'Adapt and survive' as Galapagos girds for life without tourism 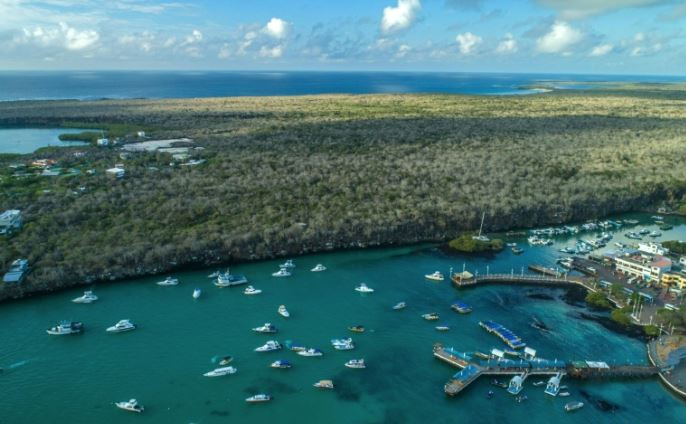 Galapagos authorities are desperately hoping for a revival of the vital tourism industry -- the main engine of the local economy -- once visitors are allowed to fly in again. (Photo: AFP)

As much of Ecuador went into lockdown against the coronavirus, scientists shipped out of the Galapagos, leaving important research activity frozen and the Pacific archipelago's tourism in deep crisis.

Authorities are desperately hoping for a revival of the vital tourism industry -- the main engine of the local economy -- once visitors are allowed to fly in again from July 1.

In the meantime, local officials say they have to take a leaf out of English naturalist Charles Darwin's book and "adapt to survive."

Darwin based his theory of evolution on his studies of the islands' unique flora and fauna. But dozens of researchers following in his footsteps had to leave before air links were shut down as the pandemic advanced.

"Science has to a large extent been paralyzed these days in the Galapagos," Diego Quiroga of Quito's San Francisco University told AFP.

Sixteen researchers of various nationalities from the university's Galapagos Science Center were repatriated along with 50 US students when Ecuador shut its borders, suspended flights and imposed strict restrictions on movement in mid-March.

The move meant that the Galapagos was largely spared the devastating impact of the virus felt on the mainland.

The Galapagos is the least affected of its provinces, with fewer than 80 infections among its 30,000 population.

The 76 projects being carried out under the Center's auspices remain in limbo, and an international congress set to draw 200 scientists to the archipelago was canceled.

The Charles Darwin Foundation, which has been operating on the islands for 60 years, had to shelve 20 research programs.

Around 30 of its scientists and volunteers who were carrying out field work "had to abandon their investigation sites," said Maria Jose Barragan, the foundation's CEO and science director.

With them went "an important season of investigation into the reproductive cycle of birds" in the Galapagos, she said.

The Galapagos National Park (PNG), a public body responsible for conservation of the archipelago, continues to operate.

The Charles Darwin Foundation fears, however, the long-term impact of the pandemic on future research.

"I think the global picture for the conservation sector, regarding acquisition and availability of funds, will change because there will likely be other interests" competing for funds, said Barragan.

"We have to adapt, which is actually the principle of the theory of evolution: change and adapt," she said.

Galapagos Science Center head Carlos Mena says he does not believe "funding for science is decreasing, but yes, it will move to other sectors, such as economic rejuvenation or the study of diseases and viruses."

As things stand, any freeze in research projects affects livelihoods on the archipelago.

Mena says this will translate into almost a million dollars in lost revenue for 2020. "Science brings in revenue. It's not huge, not like tourism, but yes, it generates revenue."

In the months of lockdown, between March and May, the Galapagos -- which had more than 270,000 visitors last year -- lost $200 million in tourism revenue, according to the Provincial Chamber of Tourism.

"The revenue is zero. There have been no tourists, therefore no admissions to the park, nor the economic revenue" they generate, said park director Andres Ordonez.

Mena believes tourism will come back stronger after the coronavirus, saying the work of researchers can "serve as a guide for better tourism" in the islands with their fragile ecosystems.