A village at the south end of Duku Highway, a popular route in the Xinjiang Uygur autonomous region, has got a ticket to prosperity by providing one-stop tourism services. 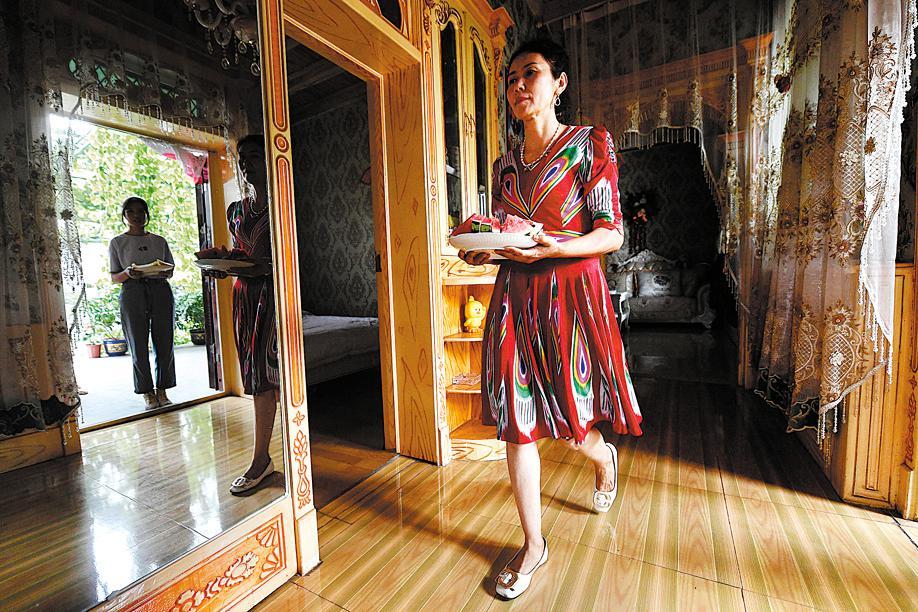 A villager who runs a homestay in the "first village of Duku" serves her guests with fresh fruit. (Photo: China Daily)

Heading from Dushanzi, in Karamay in northern Xinjiang, to Kuqa in the south, the 561 km-long Duku Highway winds through the region's amazing landscapes, including snowcapped mountains, verdant valley grasslands, crystal-clear lakes and red-tinged canyons.

It has long been hailed as one of the most scenic roads in China, attracting tourists from across the country to enjoy the breathtaking natural splendors all along the way.

The highway is closed in winter as the cold and snow make it too dangerous to drive.

This year, it reopened on July 4 after being sealed off for eight months. Kangcun village in Kuqa city's Aghi township has grasped the chance of booming road trips on Duku Highway and started to promote itself as the "first village of Duku" since 2017.

Many villagers have plunged themselves into the tourism sector by opening homestays and restaurants for travelers who run to and fro on the highway to take rest or sample local delicacies.

Tourism is gradually growing into a pillow industry for Aghi, where residents' average annual per capita disposable income reached 17,000 yuan ($2,632) last year, according to Wang Yuehua, Party secretary of the township. 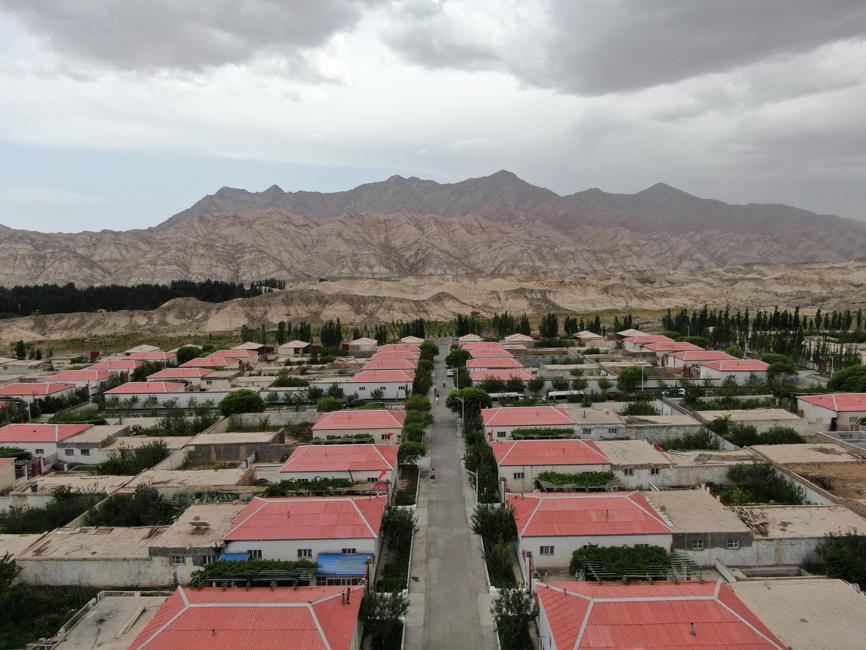 He says on average, about 3,500 vehicles a day pass by the village since the highway's reopening on July 4. Apart from offering accommodation and food to long-distance travelers, the village, situated near the mountains and by a stream, has also built entertainment facilities where folk performances are held to lure visitors from nearby cities who want a short getaway in the countryside.

The tourists can try paddling boats, riding horses or just "drifting "through the village.

Akbar Reheman, 32, is a beneficiary of the village's thriving tourism. He and his wife used to work in the downtown area of Kuqa, about 50 km from his hometown, Kangcun village. In 2018, he decided to go back to his village to set up an express station, helping to deliver e-commerce parcels to the doorway of people living in and around the village. Last year, the couple began to run a homestay at their own residence, and they have been promoting it on Trip.com Group and other domestic tourism websites.

During peak seasons in summer, he also introduces online customers he gets to homestay owners in the neighborhood.

When the couple worked downtown, they could earn 5,000 yuan per month but had to pay rent.

"We could barely save much money back then," he recalls.

"However, now we can averagely earn more than 8,000 yuan every month and are able to live in our own spacious house."

Their house and yard in Kangcun, covering 800 square meters in total, was constructed in 2014 after the local government subsidized more than 80,000 yuan to the family.

"Without a decent house like this, it is impossible for us to open a homestay," he says, adding that the local government would offer homestay owners opportunities to be trained on how to better run the business and serve tourists.

He says the past three years have witnessed a transformation of the village. The dusty paths have been expanded and paved. And income increase has enabled the villagers to buy their own cars.

In 2019, all residents of Kangcun were lifted out of absolute poverty.

Pan Weiwen, a travel-worn motorcyclist from Xi'an, Shaanxi province, just completed his motorcycle tour on the Duku Highway and chose to stay overnight in Kangcun to recover.

He says he was attracted by the village's reputation as the "first village of Duku" and found out that the price of homestays there were reasonable.

"It's a good place for travelers to take a stop," he says.

The traveler has long been yearning to ride on the picturesque highway.

"Although riding a motorcycle in the blazing sun can be toilsome sometimes, the astonishingly beautiful scenery along the highway is the cure," he adds.

He frequently shares what he has experienced during the journey by posting clips on the short-video platform Douyin. A video of him herding sheep with local nomads has notched more than 2 million views on the platform.