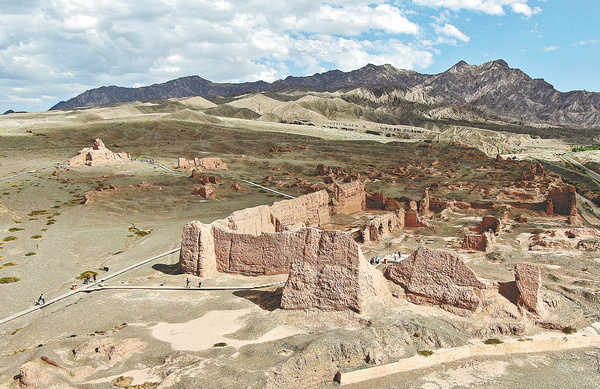 The Subash Buddhist Ruins stand like sandcastles washed over by the waves of entropy in the seas of sand and time.

They appear as nubs of mud-brick buildings in the dusty scrublands surrounding the Xinjiang Uygur autonomous region's Kucha city.

These hunks of rammed earth that jut from the gravel offer the few remaining visual hints of the once-flourishing administrative center of the ancient Chousi region.

Chousi translates as "crossroads "in the Uygur language, since the complex was located at a principal junction of the north-south and east-west Silk Road trade routes.

Today, these chunks of buildings and bulwarks stand crumbling at the intersection of space and time.

The 200,000-square-meter settlement not only hosted local nobility and over 30,000 monks at its peak during the Tang Dynasty (618-907) but also was a destination for merchant caravans and Buddhist pilgrims from neighboring civilizations.

Today, the UNESCO World Heritage Site, built between 220 and 420, continues to attract people from every corner of the globe, especially travelers and archaeologists.

The only things that live here now are tiny wild watermelons that local people brew into alcohol to treat rheumatism. 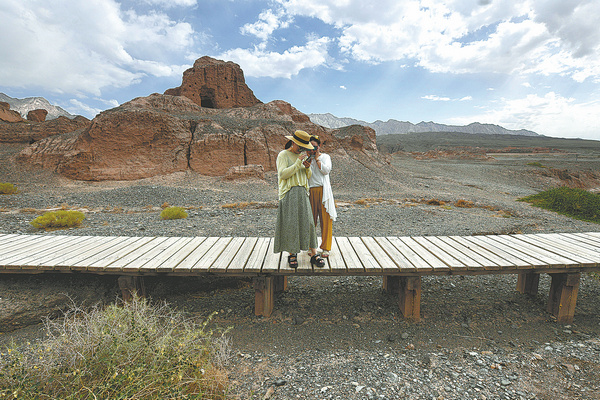 Its last human "resident" was the skeleton of a 24-year-old noblewoman discovered on the bottom floor of the West Temple's pagoda by a worker after a downpour in 1978. The front of her skull was flat, since the ancient inhabitants tied boards to infants' foreheads to produce this aesthetic. Little else is known about her.

The settlement was constructed largely in the style of Gandhara Buddhism between the Tianshan Mountains and Kucha River, since this location was believed to host good feng shui.

There were also more practical reasons. Subash means "water source" in the Uygur language. And the surrounding area is largely desert.

Important chapters of this oasis' history were recorded in the Great Tang Dynasty Record of the Western Regions, compiled by monk Xuanzang in 646, after he completed a 19-year journey through western China and Central Asia to compare Chinese and Indian Buddhist texts. He's also the inspiration for the classic Chinese novel, Journey to the West, of Monkey King fame.

But much of Subash's legacy remains a mystery buried in the bottom half of the hourglass of centuries. It's believed to have been abandoned around the 1300s.

One unanswered question is exactly where Chousi's rulers dwelled, and oversaw political and religious governance.

They've also discovered coins minted in eastern China during the Eastern Han Dynasty (25-220), and currency engraved with the Uygur and Brahmi languages.

The complex also hosts a small pagoda resembling an iconic tower in Xi'an, which was China's capital, then called Chang'an, for over a dozen dynasties－again, nodding to regional exchanges during the Silk Road's zenith.

Only the 110,000-square-meter western half of the site is open to the public, although the eastern half can be seen just beneath the horizon.

The western section's 11-meter-high Central Pagoda, with a base of 20 by 40 meters, is one of the best-preserved buildings.

While only fragments of this once grand city remain, some large and some small, these clay crumbs, sandblasted by the winds of time, leave a trail to understanding the history of this ancient city－long abandoned but never forgotten.