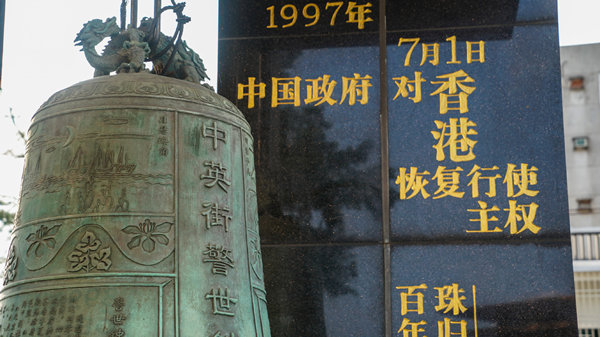 A southern Chinese trade hub boasting special links with Hong Kong is hoping the enhanced efforts to build the Greater Bay Area will revitalize its tourism industry and local economy.

Chung Ying Street, or "Sino-British Street," straddles the Hong Kong Special Administrative Region and the mainland city of Shenzhen and has been a special zone where local residents from both sides are allowed to cross the border freely.

It was once a boomtown popular among mainland visitors, who entered with a special permit to snatch duty-free goods from Hong Kong, but fell into decline after travel to Hong Kong was made easier for mainlanders.

The street derived from a small village, which was divided by the "Sino-British" borderline after Hong Kong became a British colony in the 19th century.

Sha Jintao, a 73-year-old resident, remembers how the street became a boomtown as China opened up and tightened links between the mainland and Hong Kong.

"When I was a child, there were only a few farmers and fishermen living on the mainland side of the street, while the Hong Kong side bustled with shops and businesses," Sha said.

But as Shenzhen rose as a forefront of China's reform and opening up starting in the late 1970s, the street became the center of changes. New shops and factories propped up with the inflow of Hong Kong investments, and the fancy commodities from its Hong Kong stores wooed in large numbers of mainland tourists.

Historical records show the number of tourists flocking into the 250-meter-long street peaked at 100,000 a day in the 1980s. As many as 89 jewelry stores opened in its heyday and sold 5 tonnes of gold jewelry in half a year.

The heyday was however short-lived. After Hong Kong returned to the motherland in 1997, the street began to lose its appeal, as shopping in Hong Kong was made much easier for mainland tourists. Its daily visitors dropped below 10,000 after 2003, when mainlanders were allowed to independently travel to Hong Kong.

Many stores closed due to a loss of customers, and some survived by selling fake jewelry, winning the street much notoriety, recalled Sha, who then headed the local neighborhood committee.

Sha said the ephemeral boom was limited to the era when most Chinese had limited access to the outside world, so as the country opened its door wider, the street's function as a "window" faced an inevitable doom.

"Now with a smartphone, a consumer could easily buy goods from across the globe," he said, referring to China's cross-border e-commerce boom. "So if is just for the purpose of shopping, why take the trouble of traveling to the Chung Ying Street?"

The street is now more of a cultural site, dotted with relics and museums displaying its history, but locals are hopeful that the ongoing construction of the Guangdong-Hong Kong-Macao Greater Bay Area will usher in another golden era for their neighborhood.

China has planned to turn the greater bay area, which encompasses Hong Kong, Macao and nine cities in Guangdong province, into the world's largest bay area in terms of GDP by 2030.

Earlier this month, the city government of Shenzhen said it will upgrade its ports with Hong Kong to boost the greater bay area development. The Shatoujiao Subdistrict, where the Chung Ying Street is located, was reserved for a new cooperation zone featuring tourism and consumption.

Optimism is running high in the community. New industries like artificial intelligence (AI), health and high-end shipping service have taken root in Yantian District, which administers Shatoujiao, and Sha is buzzing around to connect business people from Hong Kong and Shenzhen.

"Shatoujiao and its Chung Ying Street have boasted the one-of-the-kind advantage in Shenzhen-Hong Kong cooperation. We'll work hard to turn the blueprint of the greater bay area into a reality here," said Chen Qing, party secretary of Yantian.