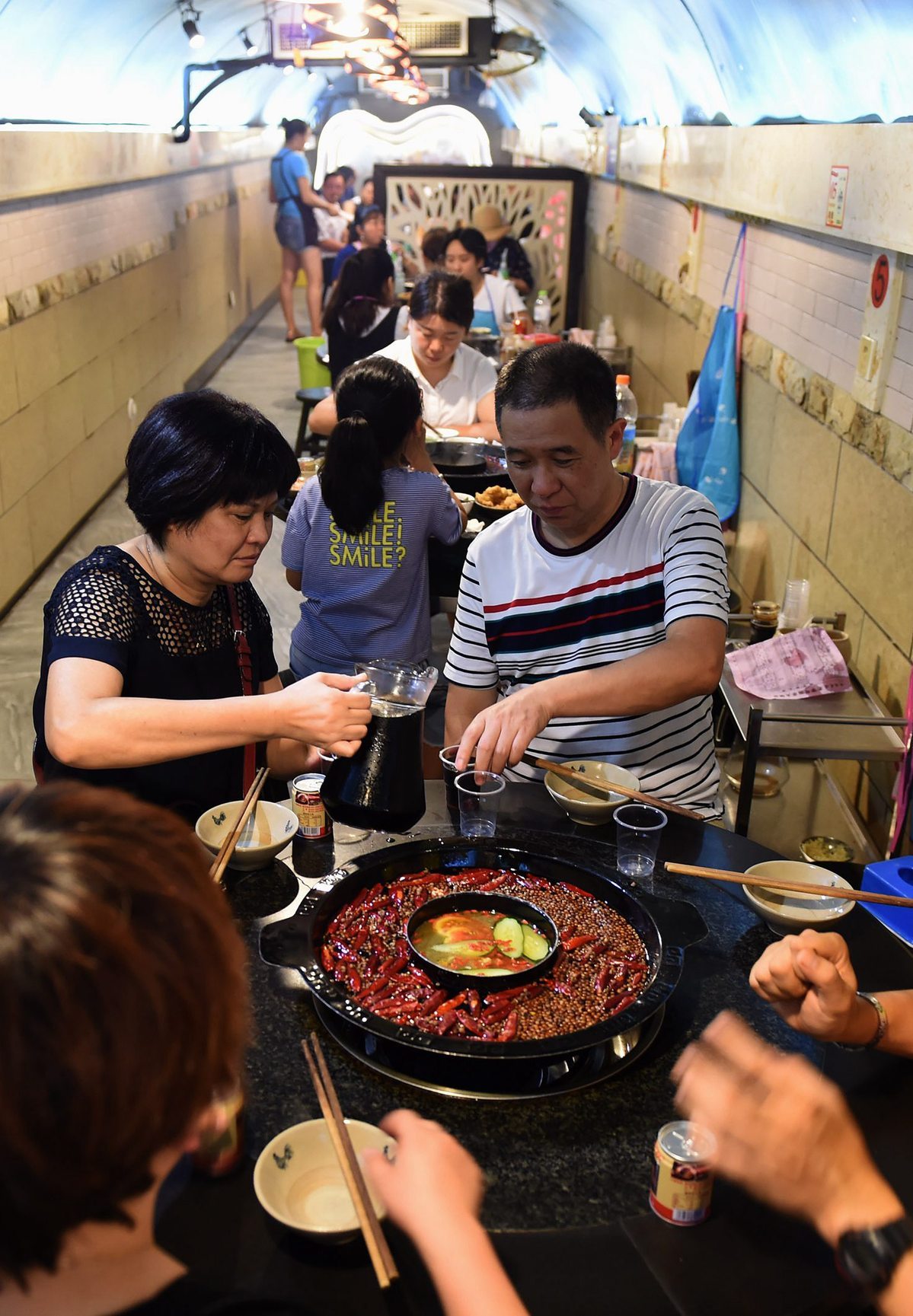 CHONGQING－Dongting Hotpot, located in the mountainous city of Chongqing for more than three decades, is always packed with spicy food aficionados. Rebuilt from a wartime air-raid shelter in Yuzhong district, the eatery attracts countless visitors from across the country to taste the local cuisine in the underground cave.

The unusual structure means the restaurant is cool in summer and warm in winter. "In summer, the temperature inside is about 10 C cooler than it is outdoors, it's as if we turned on natural air conditioning," said Deng Hong, owner of the restaurant.

Used as refuges from enemy bombing during the war against Japanese invaders, the air-raid shelters in Chongqing have today been given a new lease of life as a modern "underground city."

An exhibition hall commemorating Chongqing's civil air defense opened to the public last month, showcasing some 1,680 relics. The 10th addition to the Jianchuan Museum Cluster, the exhibition hall was constructed from a former bomb shelter.

Standing in front of a war relic, 81-year-old Wang Bangli, who survived the bombing of Chongqing in the late 1930s and early 1940s, said his house was burned down and his mother's eyes damaged. "People had nowhere to hide but inside the shelters," Wang recalled.

The bombing of Chongqing and its nearby cities, which left 32,000 people dead or injured, is regarded as one of the most horrific atrocities committed by Japan during the Chinese People's War of Resistance Against Japanese Aggression (1931-1945).

Chongqing started to construct air-raid shelters just as Japan initiated its full-fledged invasion of China in July 1937. Historical records show that the shelters could accommodate 600,000 people, with a total area of 1.1 million square meters by the end of the war.

"There are many cities in China that have air-raid shelters, but in terms of sheer scale, Chongqing is peerless," said Fan Jianchuan, founder and curator of the museum.

Yet the air-raid shelters were much more than wartime sanctuaries.

"Back then, people in Chongqing not only lived in the shelters, but produced war supplies," Fan said.

After the war, some shelters were repurposed as museums, stores and garages, even serving as a summer resort for the locals.

The shelters have provided nearly 25,000 underground parking spots in the commercial area of the Jiefang Monument in downtown Chongqing, according to local authorities.

In Yuzhong district, a former air-raid shelter has been turned into a wine cellar with a ventilation system that offers cool breezes for clients. "Vintage reds require strict storage conditions, and the shelter ticks all the boxes," the manager said.

"The spiritual torch of the gritty, tenacious Chongqing people and their perseverance should be passed on by the air-raid shelters," Fan said.