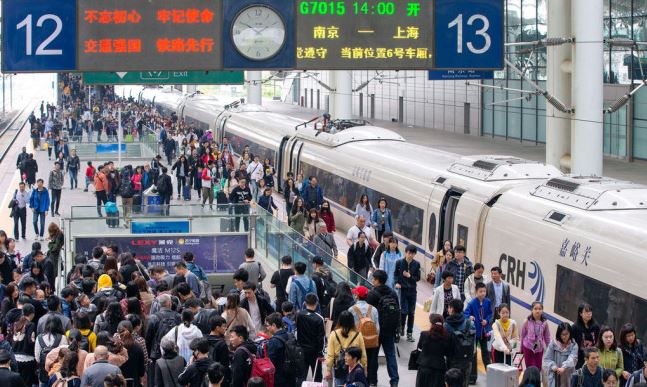 Chinese tourists and passengers board their trains the day before the four-day Labor Day holiday at the Nanjing railway station in Nanjing, Jiangsu Province, April 30, 2019. (Photo: IC)

The upcoming May Day holiday is expected to see an average of 2.2 million inbound and outbound trips made by Chinese and foreign tourists per day, up 5.9 percent year on year, according to the National Immigration Administration (NIA) Friday.

This year's holiday, from May 1 to 4, is a day longer than previous years and suitable for outbound long-distance trips, said the NIA, adding that passenger volumes at major airports in places such as Beijing and Shanghai would increase notably.

The ports at different ends of the Hong Kong-Zhuhai-Macao Bridge are expected to see a daily average of 105,000 entry and exit trips during the holiday.

More than 670,000 arrivals and departures will be made on average each day via the three ports of Luohu, Futian and Huanggang, which connect the Chinese mainland and Hong Kong, as well as at West Kowloon Station of the Guangzhou-Shenzhen-Hong Kong Express Rail Link, the NIA predicted.

It expects that the Gongbei Port linking the mainland and Macao will see an average of 435,000 inbound and outbound trips each day.

The NIA has called on border check agencies to release timely information of the passenger flow and ensure safe and orderly trips for tourists.

The NIA also recommended that passengers check their travel documents in advance and avoid traveling at rush periods if possible.