More than 300 delegates from 69 countries, including key figures and decision makers in the industry, attended the event and explored issues concerning green city development, plant breeding as well as flower market and trade.

President Bernard Oosterom of the International Association of Horticultural Producers (AIPH) said the summit served as a platform of sharing horticultural insights, technological innovation and latest knowledge and findings on the environmental and health benefits of urban greening. 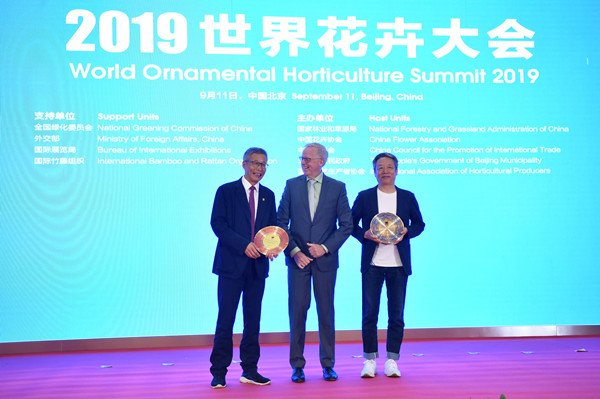 The 10-episode documentary "The Journey of Chinese Plants" wins the AIPH award. (Photo by Yuan Yi)

At the summit opening ceremony, China's first documentary on plants, "The Journey of Chinese Plants", launched by Beijing International Horticultural Bureau and directed by Li Chengcai, was granted AIPH Honorary Award for Promoting the Power of Plants Film. The documentary tells of the contribution of Chinese plants to the world.