Unlike many popular tourist cities with hundreds of years of history, Astana, the new capital of Kazakhstan, is the youngest that I have visited. It did not even exist 20 years ago but is now the second largest in the oil-rich country. 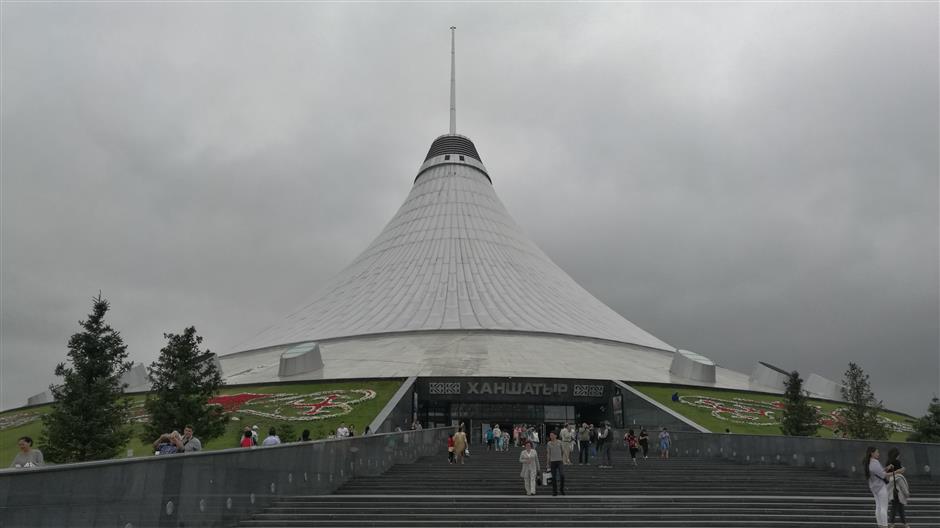 It was striking to see the flashy buildings in contrast to the endless vast flat plains, and more are going to rise up in the future.

Like Brasilia in Brazil and Canberra in Australia, Astana is a planned city. It was an empty patch of land by the Ishim River best known as a former prison camp.

It began to change shape in 1997 when Nursultan Nazarbayev, president of Kazakhstan, moved the capital from Almaty in the southeast to the newly named Astana, which simply means “capital city” in Kazakh. 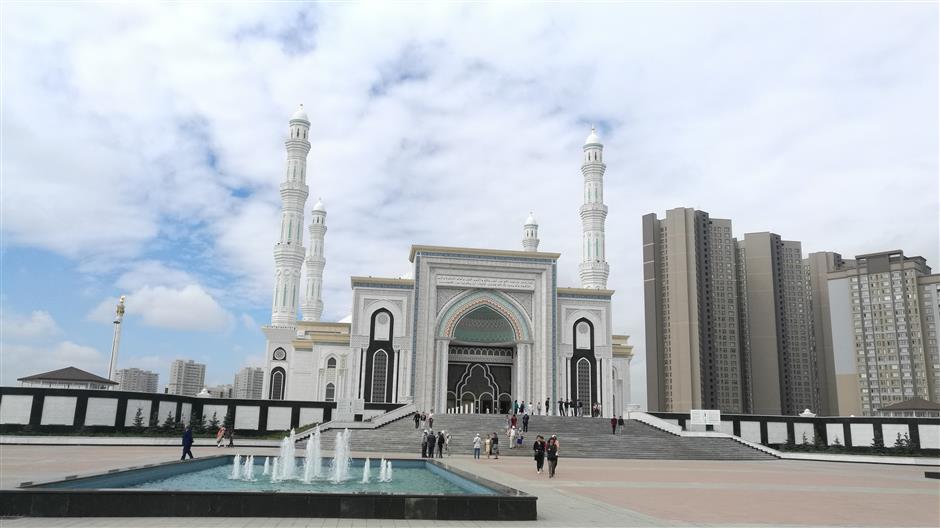 The Hazrat Sultan Mosque is one of the biggest of its kind in Central Asia.

Located in the center of the Eurasian grasslands, Astana is at the intersection of Eastern and Western civilizations. Therefore, it has a strong foundation for multicultural integration, which you can see in its variety of buildings in Asian, Western, Soviet and weird futuristic styles. 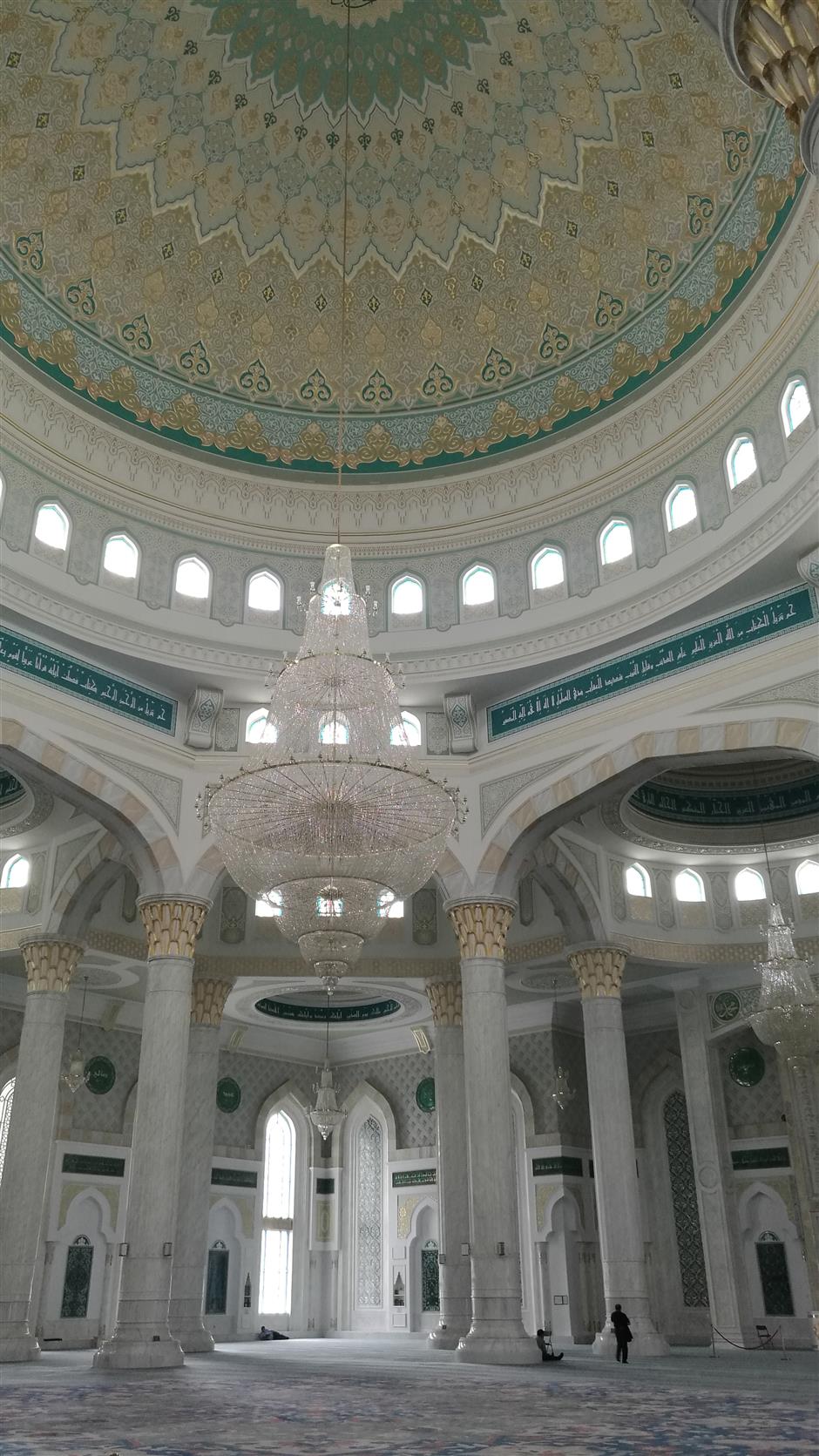 The marvelous interior of the mosque

The master plan for building Astana was designed by Japanese architect Kisho Kurokawa, but many architects at home and abroad were also behind the eye-catching structures.

Most of the modern buildings are in the city center along or near the main axis of Astana, which makes tours convenient and efficient.

The translucent, tent-shaped Khan Shatyr is somewhere local residents would recommend to visitors.

It is one of Astana’s most extraordinary buildings.

Made of a heat-absorbing material, the temperature inside in summer is the same as in the middle of winter.

The brand outlets and foods in the mall are similar to those in Shanghai or any other international city. But it also accommodates a sky beach club on the top floor with a big swimming pool, sandy beach, palm trees and water slide.

The Palace of Peace and Reconciliation looks like a glass pyramid. With a theater and a conference hall, it is used as a meeting place for international and regional leaders.

It was suggested by President Nazarbayev at the first Congress of World and Traditional Religions, which took place in Astana in 2003.

Three years later, the second congress was held in the special building and now it hosts the event every three years, focusing on topics such as countering terrorism and extremism and solving conflicts through peaceful dialogue.

The palace, 62 meters high and 62 meters base, is decorated with a work of art by British artist Brian Clarke on the top floor — a picture of 130 doves that symbolize 130 nationalities living in Kazakhstan, which is a must-see for visitors.

It now also hosts the Kulanshi, a modern art center where visitors can see works by Dali, Chagall, Picasso and modern masters of lithography from Germany, the UK, Poland, Portugal, Turkey and Kazakhstan. 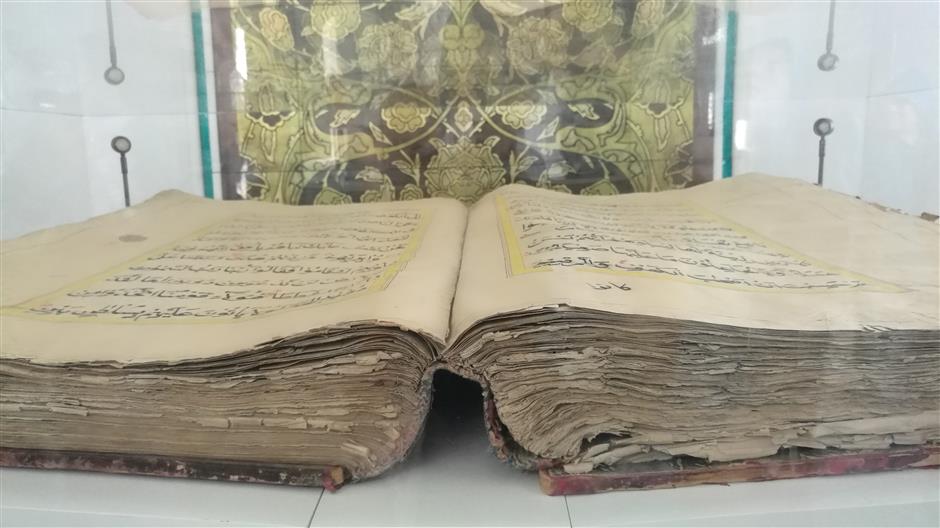 An ancient Koran book is shown in the mosque.

The Hazrat Sultan Mosque should also not be missed.

It is the largest mosque in Kazakhstan and one of the biggest of its kind in Central Asia, with a land area of more than 11 hectares and able to accommodate up to 10,000 worshipers.

It looks solemn from the outside but the interior is beautiful with extensive Kazakh ornaments, as well as huge domes, pillars and crystal chandeliers.

There’s a sense of serenity in the mosque as visitors step into the building quietly and see worshipers praying.

For female visitors, free robes are available at the entrance.

As the first president of Kazakhstan following its independence from the former Soviet Union, Nazarbayev’s influence can be seen everywhere, and other structures were built based on his ideas. These include the Bayterek Tower, for which the president drew a sketch that is now on display in the national museum.

This monument and observation tower is one of the most popular tourist attractions.

It stands 97 meters tall to represent 1997, the year Astana was named the capital. 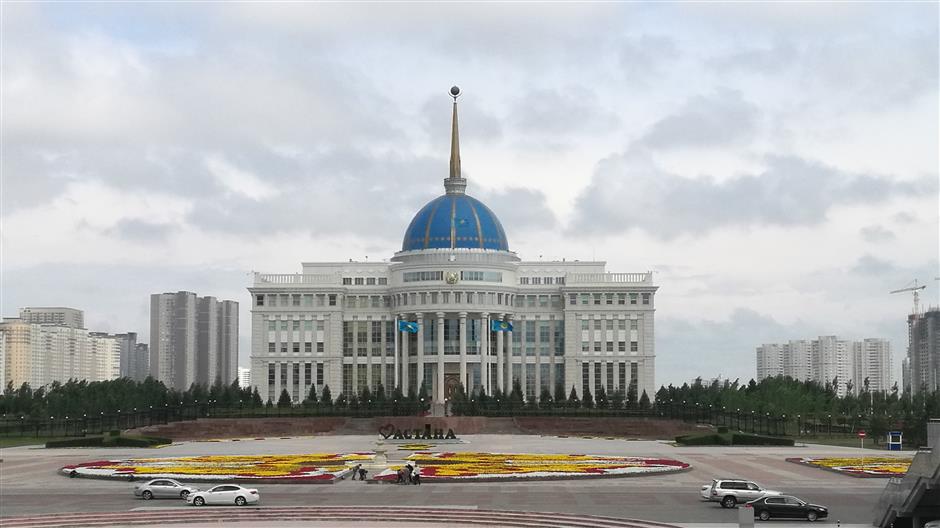 The Ak Orda palace is the presidential residency.

This white latticed tower crowned by a large glass orb is said to embody a Kazakh legend in which a mythical bird lays a golden egg containing the secrets of human desire and happiness in a tall poplar tree beyond human reach.

Visitors can be seen waiting in line under the tower to take lifts up inside the “egg,” where you can ponder the symbolism and enjoy a bird’s-eye view of the city.

You can also place your hand on a print of President Nazarbayev’s palm while gazing north towards his palace, which looks similar to the White House in the US.

The Bayterek Tower is in the middle of Nurzhol Boulevard that connects the Presidential Palace and Khan Shatyr.

Nurzhol Boulevard, on the left bank of the Ishim River, is a business and administrative center, where many ministries, commissions and headquarters of large state-owned enterprises are located.

It is symmetrical with flower beds in the middle and a long row of buildings on each side of the boulevard.

The Ak Orda palace is the presidential residency. Like the White House of the US and the Buckingham Palace of the UK, Ak Orda has excursions organized for visitors to see the place where most importance decisions are made for the country.

To know more about the history and culture of Kazakhstan, you need to visit a huge blue-glass and white-marble building — the National Museum of Kazakhstan.

Visitors are welcomed into the entry hall by a giant golden eagle and a sun, symbols of Kazakhstan, soaring over a vast map of the country.

Interactive displays and exhibits tell you the history and culture of Kazakhstan from ancient to modern times.

The Golden Hall is one of the most impressive parts as it houses several thousand Bronze Age ornaments from the famed “Golden Man,” a third to fourth-century warrior whose gold-clad remains were uncovered in 1969. It’s now a national symbol of Kazakhstan.

To look into the future of Astana, you should visit the Palace of Independence for its huge scale model of how the city will look in 2030. According to the plan, Astana will then be a city with over 1 million residents.

There is no direct flight from Shanghai to Astana. You can make transfer in Beijing, Hong Kong, Delhi or Moscow. The whole flight takes at least 11 hours.