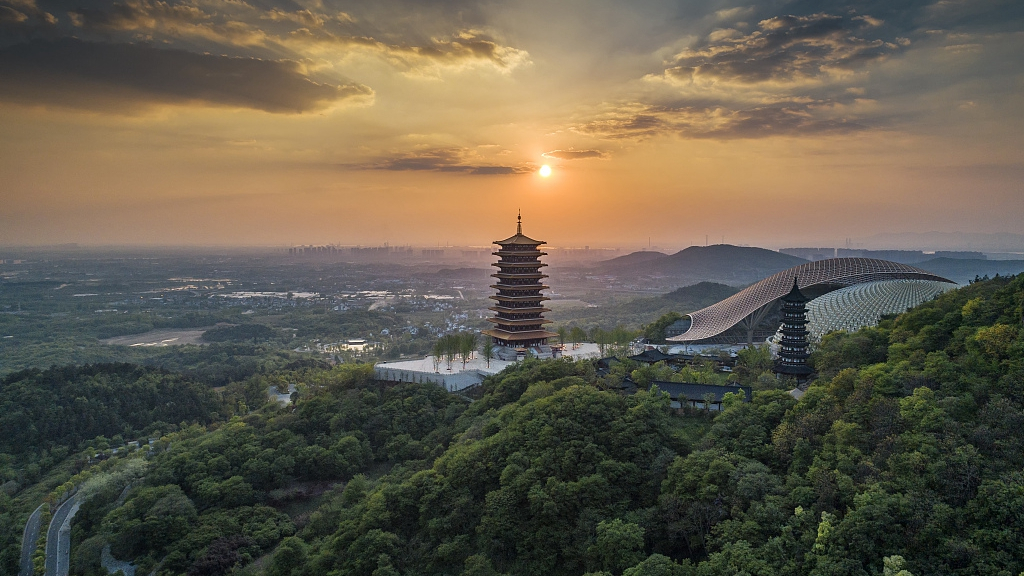 China's fourth "forest oxygen bar" list, a reference to places rich in trees, was recently released. CGTN will be reviewing 10 of the 22 listed forest parks. Our last episode takes you to Niushou Mountain Cultural Tourism Zone in Nanjing, east China's Jiangsu Province – a preaching site for worshiping and a resort for leisure and vacation.

Niushou literally means "cattle head" in Chinese. The mountain's twin peaks on its east and west side resemble ox horns, hence the name.

Surrounded by lakes and lush greenery, the mountain is often shrouded in mist, for the subtropical monsoon humid climate brings frequent rain to the area. Especially, during the spring season, when the mist bathes the scenic area with charm.

Niushou is not only home to abundant ecological and natural resources, but is also a newly constructed site that boasts world Buddhism culture.

Located on the west peak of Niushou Mountain, Usnisa Palace is definitely a jaw-dropping spot. When looking from the outside, the palace is comprised of two domes. The large dome looks like the kasaya (Buddha's robe) covering the small dome, standing for kasaya protecting the holy śarīra (Buddhist relics).

Inside the palace, the Great Usnisa Hall often leaves numerous visitors in marvel. The magnificent and lavish setting simply takes your breath away. Decorated in vibrant colors, the dome-shaped hall is utterly gorgeous.

Altogether there are nine floors inside the palace, with six floor underground and three on the ground. At the center of the hall lies the Great Stupa of Usnisa which is over 20 meters high.

About five minutes from Usnisa Palace is the 88-meter-high Usnisa Pagoda, a magnificent Tang-style building that covers an area of 4,677 square meters. On the top floor, you are able to enjoy a bird's-eye view of the whole scenic area.

Apart from the sites mentioned above, you can also visit the Usnisa Temple, Niutou Chan Culture Park and the nearby forest park.