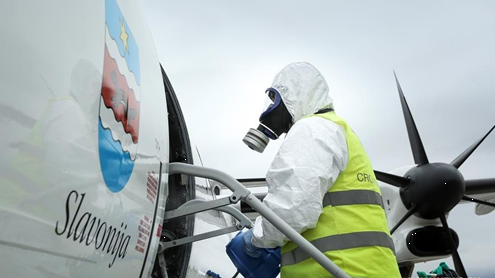 An airport employee in protective outfit is seen during the disinfection procedure of a Croatia Airlines aircraft at Franjo Tudjman Airport in Zagreb, Croatia, on March 13, 2020. (Photo: Xinhua)

With tickets sold out on travel service apps and airline websites, Chinese students stranded overseas and scrambling to get home have been left with little option but to turn to unlicensed dealers who are selling tickets at 10 times the price amid the pandemic.

A Global Times reporter reached a dealer who claimed to have connections at major Chinese airlines, so he can book tickets directly in their systems.

The dealer told the Global Times reporter, who pretended to be a buyer, that he could get a ticket from New York City or San Francisco to China on April 10 for a deposit of 30,000 yuan ($4,227), with a total price for a one-way ticket of 80,000 yuan. The dealer did not specify which airline or flight he would help book.

A single economy ticket from New York to Beijing before the coronavirus outbreak is rarely above 10,000 yuan, even at peak times such as the summer break or Christmas.

The short supply and subsequent price gouging comes after a majority of airlines worldwide have cut capacity as a result of the coronavirus shutting down travel and grounding most flights. Of the 153 carriers, 72 have announced capacity cuts of 100 percent. Additionally, almost 85 percent of airlines globally have made capacity cuts of 60 percent or more, according to data derived from carrier announcements.

The Civil Aviation Administration of China (CAAC) reduced international flights to 108 a week, 85 percent fewer from the previous week and only 1.2 percent of the amount before the COVID-19 outbreak, CAAC official Jin Junhao said at a press conference on  Monday.

The policy adjustment came as imported infections have jeopardized the country's phased victory over COVID-19, with a total of 723 imported cases reported by the end of Sunday.

Before the new policy, tickets from New York City to China through official channels had already risen to 20,000-30,000 yuan amid the surge in demand from Chinese nationals to return home.

Airlines adjusted ticket prices as the outbound trip has low or zero occupancy while the costs remain similar, which means airlines can only make money from the return trip to China. The quarantine requirements for crew on international flights also drove up costs for companies, an industry observer who requested anonymity told the Global Times.

But the observer noted the major reason behind the eyewatering were the "black dealers," calling for severe punishment on people who are making a fortune from a global crisis. Such behavior not only disturbs the market but also damages social ethos at a time when people should be united.

Usually tickets are sold at discount prices below the list price of airlines as dealers get bonuses from the servicers. In times of tight supply, these dealers are able to use their contacts to book full-price tickets from airlines, which they sell on to customers for more, the observer said.