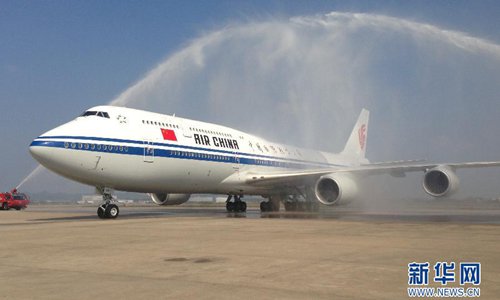 More people are traveling by air during this year's Spring Festival holidays compared to last year, while travel by road, though still the main mode of travel, recorded notably fewer trips.The number of trips in general in the first half of this year's Spring Festival travel rush declined 3.11 percent between the first and 15th of February compared with last year, the Ministry of Transport reported.However, air travel jumped 9.81 percent during the same period, with 23.88 million trips. More than 132 million trips were made on the country's railway system, up 1.77 percent. A total of 942 million trips were made by road, and 14.2 million trips were by boat, declining 4.03 percent and 3.97 percent respectively.On the day of Spring Festival Eve 1.31 million people traveled by air, an increase of 13.9 percent compared to the previous year.Apart from family reunions, an increasing number of people are traveling to sightseeing destinations. On the first day of the new Lunar New Year, February 16, tourist attractions around China received 71 million visitors, an increase of 9.4 percent compared with the previous Spring Festival. Their spending on that day jumped 9.7 percent to 83.4 billion yuan.Weather forecasts call for pretty good weather for most of the country over the coming days of the weeklong official holidays, leading to predictions of continuing growth in tourism.As most people have reached their destinations in long-distance travel and began visiting friends and relatives and traditional festive events like temple fairs, the number of short trips will climb.