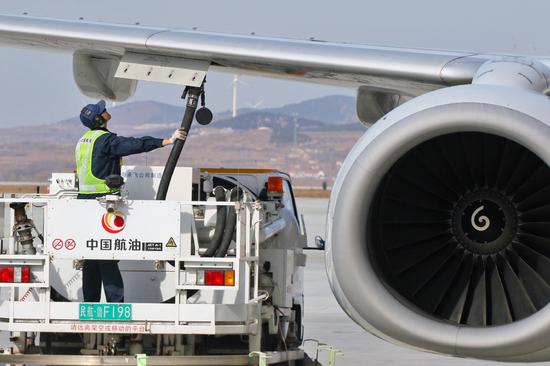 A group of domestic airlines reinstated fuel surcharges for passengers on Tuesday, the first such move after three years of exemptions, as oil prices continue to rise.

The threshold to restart levying the surcharges is an oil price of around 5,000 yuan ($781) per metric ton, which has now been hit.

State-owned carriers Air China Ltd and China Eastern Airlines Corp Ltd announced that from June 5 onwards, they will charge 10 yuan per passenger for domestic routes of any distance. Before, they applied different surcharges for different route lengths. Children, toddlers and military personnel with disabilities will be exempt from the charge, according to the companies' statements.

"The oil price rise will have a negative effect on domestic airlines. They are very susceptible to fluctuations in oil prices," said Li Xiaojin, a professor of aviation economics at the Civil Aviation University of China in Tianjin.

"Oil prices are unlikely to drop or surge significantly. Airlines could take some steps to hedge against the risks and take measures to reduce oil consumption, as the impact is likely to be long-term," he said.

"Due to the saturation of airspace resources, it's hard for carriers to add further capacity. It is becoming increasingly difficult for supply to meet demand, leading to an increase in flight ticket prices and income growth for operators," said Lin Zhijie, an aviation industry analyst and columnist at Carnoc, a Chinese civil aviation news website.

"Applying fuel surcharges is a kind of compensation for airlines' costs, driven by rising oil prices. The price of flight tickets is driven by the changing supply-demand relationship. These two aspects are not directly connected," he said.