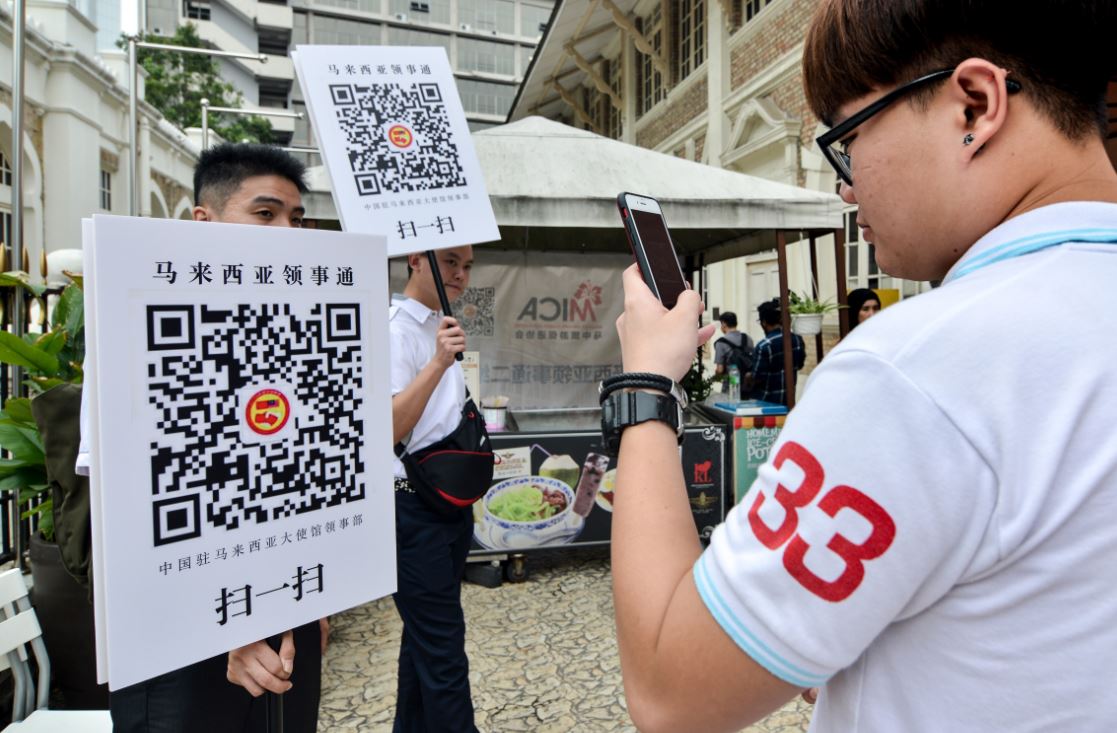 A tourist uses his mobile phone to scan the QR code of the Malaysian Consul Service at the Chinese Embassy in Kuala Lumpur. (Photo: China Daily)

Today it is no rarity to navigate a Chinese city with no wallet but a mobile phone. Now, Chinese technology powerhouse Tencent Holdings Ltd wants to extend such domestic convenience overseas.

WeChat, Tencent's homegrown social media to payment app, has formed a travel alliance in Beijing to call on tourism agencies from various nations to jump on the mobile-centric bandwagon among Chinese tourists.

The bloc, called "Welcome with WeChat Alliance", has an initial 30-plus members, including country-level tourism boards like those of Germany and Sweden, as well as city-and region-level agencies from Dubai to Los Angeles.

The overarching goal is to encourage the greater use of the app, which now boasts 1.1 billion global users, and to co-develop new functions to help travelers better explore foreign destinations.

China is the world's largest outbound tourism market, with some 150 million overseas trips made last year, up 14.7 percent compared with 2017, according to the China Tourism Academy. But the market is maturing as more tourists seek independent travel to explore local experiences, said Zhang Yang, a researcher with the academy.

"When people travel abroad now, they find information on social platforms including WeChat. In the past, they traveled with travel agencies, but now they like to plan their trips themselves," said Zhang.

WeChat has already teamed up with tourism agencies from Dubai, Malaysia, Singapore and New Zealand's Auckland since January, which helped lay the foundation for its new overseas expansion plan. The alliance will support members in digitalizing their content and services, offer training on effective practices, and finance innovative solutions.

It also allows for mini-programs, which are essentially built-in sub-applications that don't require separate installation, and can be customized for various purposes, such as buying coupons, travel insurance or serving as travel guides.

Li Zhaohui, China director with the German National Tourist Board's Beijing Office, said social media is playing an important role in attracting tourists. He hoped more Chinese tourists would be drawn to the European country, following the service empowerment via the alliance.

A research report released by homestay service portal Airbnb in September found that the Chinese are increasingly keen to visit offbeat, unusual or little known destinations.

Those born in the 1990s or later are expected to account for half of the new outbound traveler community, and the group appears to be more enthusiastic about venturing into new territories, the study said.

Chinese are also dispelling stereotypes of visiting mostly landmarks and partaking of luxury goods, and are gradually turning to more experience-driven items. Sales of intra-Europe railway tickets surged 35 percent from the same time last year, according to travel portal Fliggy, whereas satiating palates for durians helped increase trips to Thailand and Malaysia by 59 percent year-on-year.

WeChat's initial overseas expansion could be traced back to 2016, when it launched a "WeChat Go "solution encouraging foreign merchants to accept WeChat as a form of payment. It soon disclosed bolder ambitions: to provide comprehensive solutions from tourist guides to online reservations.

WeChat has since been looking to work with more smart solutions and service providers, or SSPs, as it seeks to deepen its mobile wallet business' overseas presence.

According to Fan Wei, overseas business director of WeChat Pay, the idea is to make its WeChat app payment function run as smoothly in a foreign market as it does at home, by incorporating more app programming interfaces and payment-to-marketing tools developed by third-party providers.

"The introduction of the SSPs serves to better connect with merchants, users and licensed payment providers," he told China Daily in an earlier interview. "They stand to bring to life a variety of smart commerce solutions inspired by local merchants."

To make it more accessible to Chinese travelers, WeChat has got involved in the tax-refund business. It has partnered with Swiss company Global Blue to offer an instant tax refund service for Chinese tourists departing from Madrid airport.

Called We Tax Refund, the service is a real-time refund mini-program, which easily helps to refund users' money back to WeChat Wallet. To date, it enables users to refund at 85 airports and three harbors in 21 economies, the company said.

Users can receive their rebates in yuan, which are sent to their WeChat Wallet account immediately once their tax refund forms are approved. It is not a default WeChat function, but needs to be processed via the mini-program.

WeChat is also offering instant in-store refunds overseas. For instance, Global Blue and WeChat Pay have joined forces to offer in-store refunds, which means that Chinese tourists no longer need to line up to get their tax refund forms processed at the airport.