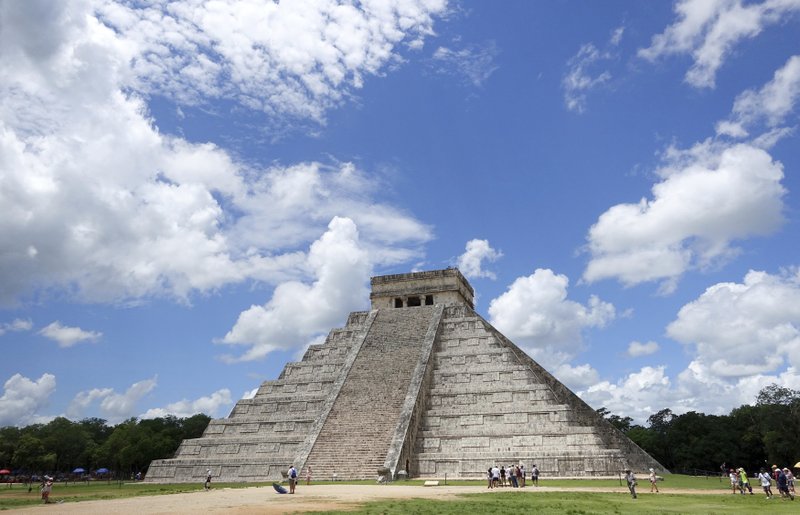 It was an archaeological adventure: a 12-day family trip to Mayan and Aztec pyramid cities, from Mexico City to the Yucatan jungle.

Our timeline spanned from the ancient city of Teotihuacan, founded before the birth of Christ, to sites like Chichen Itza, Tulum and Templo Mayor, built in the centuries before the Spanish conquest of the early 1500s.

Dozens of these sites dot Mexico. But we didn’t want to go completely Indiana Jones. We looked for variety and ease of access. To get the most out of our visits, we hired English-speaking guides at every stop.

We started in Mexico City. Visiting Templo Mayor, just off the Zocalo or main square, we had the site almost entirely to ourselves on a weekday morning. It’s the newest of the pyramids we saw, but in worst shape, having been destroyed and built over by the Spanish 500 years ago. Visually it’s not even a pyramid, but a below street-level ruin of seven multi-layered pyramid foundations. Electricians working in a basement discovered it in 1978 when a floor collapsed, revealing a round stone depicting Aztec goddess Coyolxauhqui.

That piece and thousands more are displayed in a museum overlooking the ongoing excavation. The excavation site displays stone-carved snakes and a few other sculptures, their faded colors giving just an inkling of Aztec Technicolor grandeur.

More impressive visually was Teotihuacan, an hour outside Mexico City. Teotihuacan, which predated the Aztecs, was established in the second century B.C. in the Mesoamerica era and lasted almost 1,000 years. Lurching skyward and seen for miles around, two giant pyramids anchor the once-thriving city where 100,000 to 200,000 people lived in more than 2,000 buildings.

The Pyramid of the Sun is 213 feet tall (65 meters) and is connected by the Avenue of the Dead to the smaller Pyramid of the Moon. The place is an archaeological bonanza, with digs and research ongoing.

Unlike many other pyramids, you can climb to the top of both Teotihuacan behemoths. But it’s not easy. The shorter ascent up the moon pyramid is steeper and more treacherous than the climb up the sun pyramid, which teems with tourists, but is easier to navigate. The payoff for both climbs: incredible vistas. Near one entrance inside a cavern is La Gruta restaurant.

From Mexico City we flew to the Yucatan. Avoiding the tourist mecca of Cancun, we stayed in an Airbnb in Playacar, a gated community south of Playa Del Carmen, and rented a car. The roads we took were in great shape, including a new four-lane highway from Cancun to Merida (be warned, there are few offramps) on the route to Chichen Itza, and a new two-lane road from Chichen Itza to Tulum.

Area maps are full of pyramid sites but we kept it simple, stopping first to see the beautiful, breathtaking seaside ruins of Tulum in Quintana Roo. Situated on an expansive bluff overlooking the ocean, the old city was a fishing, trade and religious center. Several thousand Mayans lived here from the year 975 until the Spanish arrival.

Today giant iguanas sun themselves on the stone floors and the collapsed walls of decaying buildings that once housed priests, the wealthy and scientists. The main pyramid, El Castillo (the castle), occupies the best cliff in Tulum but is off limits to pedestrians. Tourist meander elsewhere. A crowded beach sits below the ruins.

From Tulum, we drove three hours across the Yucatan jungles to Chichen Itza, a Mayan city that thrived for centuries before the Spanish conquest, when it was abandoned. It virtually disappeared into the jungle, known to just a few locals, until the 19th century. Now it’s the most developed of all the pyramid attractions, with 2 million visitors annually. There’s ample parking so ignore the hand-waving vendors en route to the park. You’ll know when you’ve arrived.

The pyramid shoots skyward from the jungle floor and is in wonderful condition. Adjacent to the main pyramid is a ball court where a sport was played, something like soccer meets basketball, complete with post-game sacrifice. Surrounding temples include Temple of the Warriors, El Caracol observatory and smaller buildings. Many are off limits to prevent vandalism and graffiti.

Several spots have amazing acoustics. Clap at the foot of Chichen Itza’s main pyramid, also called El Castillo, and the sound reverberates back. At the ball court, el Juego de Pelota, whispers and claps will echo all over. Hearing those noises bouncing off the wall was said to be part of the sport’s appeal.

The stone carvings and statues are enthralling, despite their violent depictions of severed heads and spurting blood.

Other sites to consider visiting include the ruins at Coba, located between Valladolid and Tulum over several miles of thick jungle and best navigated with a guide; the caves at Grutas de Loltun in the Ruta Puuc region, 70 miles (113 km) from Merida, where the Mayans performed religious ceremonies; the pyramids at Monte Alban in Oaxaca and a round pyramid, Cuicuilco, in Mexico City.

Our archaeological adventure took us time-traveling across the centuries. But most of all, it filled us with wonder to behold the mysteries and monuments of these vanished civilizations.

PRICES, TOURS AND GETTING AROUND: Admission fees range from $3.50 at Tulum to $13.50 at Chichen Itza. English-speaking tour guides can be hired at various sites for $35-$50 for a couple of hours. You’ll pay more for customized, longer tours and private transportation. Tour companies like Gray Line charge $40-$50 round-trip from Mexico City’s hotel district to Teotihuacan, including an English-speaking guide. Buses from the city’s main northern terminal to Teotihuacan cost about $5; Uber is about $45 one way. Options for getting to Templo Mayor in downtown Mexico City include the double-decker Turibus, with a $10-a-day hop-on, hop-off pass.