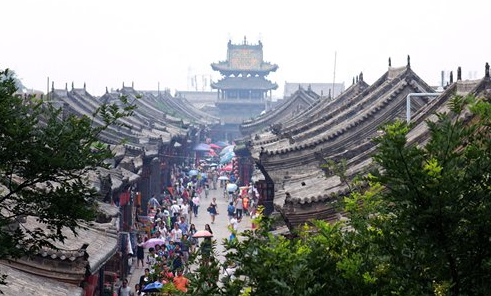 Visitors take in the sights at Pingyao. Photo: IC

On a cold winter's night outside the ancient walled city of Pingyao in northern China, hundreds of people gather to watch an unusual theatrical production.Eight women in traditional costume towel-dry six muscular and freshly-bathed men, before suddenly sinking their teeth into the men's arms as they howl in pain."If you die, the teeth marks will guide your spirits home," a narrator tells the audience.This was how bodyguards were sent off to protect merchants in the Qing Dynasty, in a scene that has been brought to life by Chinese director Wang Chaoge in her interactive play, Another Glance at Pingyao.The play is part of a series of theatrical performances created by local directors, often held at UNESCO World Heritage sites, aimed at rediscovering history and traditional culture. In many ways, the show symbolizes the city's recent artistic renaissance.The performance focuses on a cultural trope that is all too familiar to Chinese - preserving the family bloodline. But the story, about a bank owner who threw all his wealth into rescuing an employee's kidnapped son and died with 232 bodyguards in the process, also touches on business culture and character traits that the Chinese are proud of."I was awed by the spirit of integrity and righteousness. I saw many were moved to tears," said one viewer in an online forum."[The play] epitomizes the character of Shanxi merchants," said another member of the audience, a Pingyao native. "We hold loyalty and fraternity in high esteem."The play has been a huge success, grossing 100 million yuan ($15 million) in 2017 alone, with tourists traveling to Pingyao, in Shanxi Province, from far and wide to catch this unique take on Chinese history, culture and beliefs.City of historyThe walled city of Pingyao was built to its current form in the 14th century, and was named a world heritage by UNESCO in 1997, as "an exceptionally well-preserved example of a traditional Han Chinese city."The city put itself on the map in the 19th century as China's financial center. Banks flourished as Shanxi merchants expanded their businesses across the country."In its heyday, Pingyao hosted 22 bank centers and controlled nearly half of the money in the country," said Gao Chunping, a researcher at the Shanxi Academy of Social Sciences.Today, tourists come in great numbers to the bank museum - an imposing courtyard which houses the remnants of China's first draft bank, Rishengchang, which was established in 1823."People often marveled at how the banking forefathers created ultra-safe pin codes with Chinese characters," said Gao Xianhui, a local tour guide. "It was a time when we rarely used Arabic numerals. And yet there were very few cases of pin theft fraud."But Pingyao's golden era did not last. In the early 20th century, the banks collapsed one after the other as the Qing imperial government fell and an influx of foreign banks came in equipped with better technology.The city soon became an economic backwater, and until a few years ago, visitors struggled to find ATMs in this former banking hub.On the reboundBut now, the city is in the ascendancy once more, littered with souvenir shops, restaurants, museums and theatrical performances like Wang Chaoge's.A new genre of business has risen in the city, which teems with studios teaching centuries-old folk art, such as woodcut prints, paper-cutting, Peking opera masks and earthenware.Hou Quanying, 68, a paper-cutting master, said that many foreigners frequented her studio, and loved the artwork pasted onto windows during festive occasions.Deputy county government head Liu Guangming has said that "culture is the soul of Pingyao." Today that sounds more true than ever."This ancient city can only be brought to life if administrators give its rich history and traditional culture full play," he said.Cities rise, fall, and rise again, whether it is in commerce, the arts or culture. And Pingyao is no different.On top of its annual film and photography festivals, and lavish Chinese New Year celebrations, the government plans to further play up the cultural card next year by introducing an international sculpture festival with European partners.

Liu said the festival would also highlight the Shuanglin Temple, which houses some of the country's finest examples of colored Buddhist sculptures dating back to the 12th century."Preserving history is the future for us," said Liu, reading the slogan on display at the entrance of the government building.