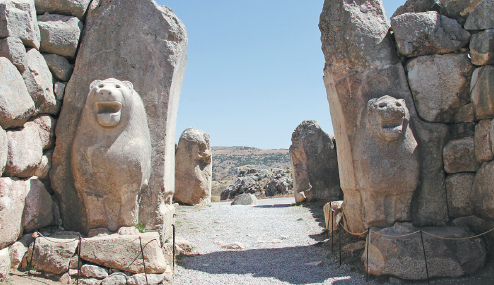 The Lions' Gate at the ancient city Hattusa, which lies near modern Bogazkale in Turkey's central province of Corum. (Photo: Xinhua)

Turkey's Anatolia is, from the beginning of human history, a crossroads for many civilizations, the most significant of which are the Hittites whose glorious capital Hattusha was the heart of a powerful empire 3,000 years ago.

The Hittite Empire in the late Bronze Age was one of the civilizations that played an important role in the development of urban life. Hattusha, once an impressive city, lies near modern Bogazkale in Turkey's central province of Corum.

The ancient city is now a popular tourist attraction in Turkey. During the reign of the Hittite Empire, Hattusha played a critical role as the capital and the center of this powerful empire.

"Hattusha is located in a strategic location, near the Kizilirmak River, a source of life, and thus has been used as the capital for centuries by the Hittites," said Metin Cakar, director of Corum museum.

The museum hosts numerous artifacts of the Hittites who occupied Anatolia between 1700 BC and 1200 BC and expanded their territories into an empire stretching from Anatolia to Syria.

With an astounding role in history, the Hittite Empire fought the powerful Egyptian Empire in the battle of Kadesh, almost killing the Pharaoh, Ramesses the Great.

Later the empire signed what is considered the world's earliest peace treaty, the treaty of Kadesh in their Indo-European language on cuneiform tablets.

Yet, there is still some progress to be made to attract even larger groups of archeology lovers and visitors, said Cakar, as the goal is half a million tourists a year.

"I think Hattusha should be incorporated into the elite group of sites that our country is trying to promote abroad, such as Gobeklitepe" which is the Neolithic site discovered in southeastern Turkey and considered one of the first temples of humanity, he noted.

Hattusha is a vast fortress-city sprawling over the rock terrain, with craggy citadels and elaborate temples constructed with huge limestone.

The ancient city is the result of decades-long joint works of German and Turkish archeologists and is notable for its urban organization, types of well-preserved structures, rich ornamentation of the Lions' Gate and the Royal Gate.

It was during these great battles that the Hittites developed the lightest and fastest chariots in the world. Egyptians borrowed this military vehicle from the Hittites, according to scientists.

The city of Hattusha was discovered in the late 1830s and excavated in early 1900s, along with tens of thousands of clay cuneiform tablets which documented much of the life of the Hittite Empire.

In 1917, two sphinxes were removed from the southern gate of the city and taken to Germany for restoration. One well-preserved sphinx was returned to Istanbul in 1927 and put on display in the Istanbul Archeology Museum.

The other sphinx, however, was not returned until 2011.

Both sphinxes are now on display at the museum outside the Hattusha ruins, waiting for many more visitors to discover the illustrious city.