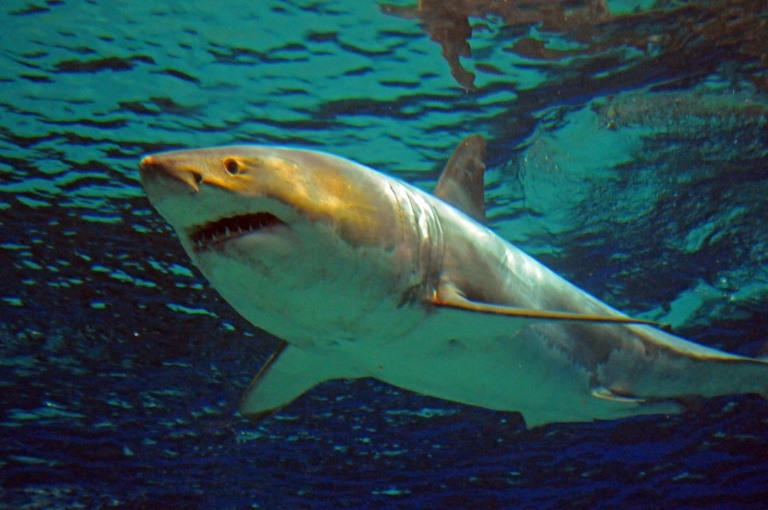 Great white sharks have been a protected species in Australia since 1999, when signs emerged of a long-term decline in their population

At least 8,000 great white sharks roam the waters off Australia, according to research released Friday that is likely to renew debate about balancing conservation efforts with mitigating attacks.

Great whites have been a protected species in Australia since 1999, when signs emerged of a long-term decline in their population in waters around the continent.

But an increase in attacks on surfers and swimmers has prompted some Australian states to push for the culling of the apex predator despite their protected status.

Researchers have struggled to get an accurate census of adult great whites as they are few in number and difficult to track. Previous sources of figures such as historical catch data were also patchy.

But using groundbreaking genetic and statistical analysis of juvenile sharks, scientists from Australia and New Zealand led by national science body CSIRO have been able to produce a total population estimate in Australian waters of at least 8,000, including about 2,210 adults.

"Now that we have a starting point, we can repeat the exercise over time and build a total population trend, to see whether the numbers are going up or down," the CSIRO's principal research scientist Rich Hillary said in a statement.

"This is crucial to developing effective policy outcomes that balance the sometimes conflicting aims of conservation initiatives and human-shark interaction risk management."

The landmark analysis involved extracting DNA from juvenile sharks to find genetic "marks" of both parents, the researchers wrote in the Scientific Reports journal.

The scientists were then able to estimate using statistical methods how many adults had produced juveniles.

The great white population along the east coast, from southern Victoria state to Central Queensland state and across to New Zealand, was determined to be about 5,460, including 750 adults.

The researchers were not yet able to compile a total population estimate on the west coast -- from southern Victoria to north-western Western Australia.

But they said there were some 1,460 adult white sharks -- double the number on the east, which implied a total population that is much higher.

Although more data will be needed to allow the scientists to estimate population trends over the next few years, research to date indicates great white numbers have stabilised or slightly declined since they became protected.

"The most we can say at present is that the current estimates of abundance and key demographic parameters (survival, fecundity etc) are more consistent with slight current declines or zero population rate of change," the report said.

There have been three shark encounters off Australia this year, and 18 in 2017 including the death of a 17-year-old girl mauled in full view of her parents in Western Australia.