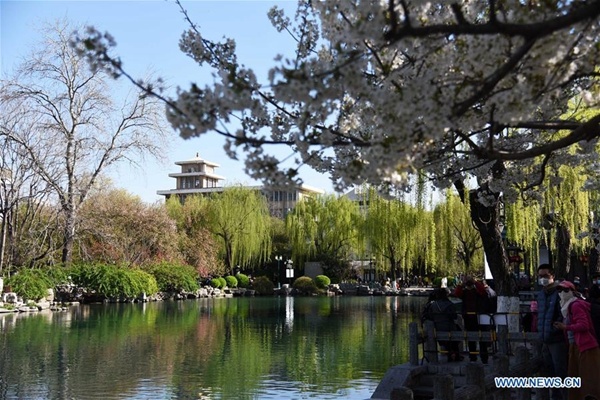 Wulongtan Park in Jinan, Shandong province, is among a growing number of tourism spots that are reopening as the COVID-19 epidemic increasingly comes under control in China.(Photo: Xinhua)

A growing number of tourism spots are reopening and travel restrictions are being loosened as the COVID-19 epidemic increasingly comes under control in China.

The National Health Commission received reports of 39 new confirmed cases on the Chinese mainland on Monday, all of which were imported. No new domestically transmitted cases were reported.

A total of eight museums, including Shenyang Palace Museum, the imperial palace of several Qing Dynasty (1644-1911) emperors, reopened to the public last week in Shenyang, capital of Northeast China's Liaoning province, after months of being shut down.

However, with the threat of cross-infection still a danger, visitors must have their temperatures checked on arrival, maintain a mutual distance of no less than 1.5 meters in lines and wear masks.

"My family canceled our travel plans during the Spring Festival holiday. When the outbreak is over, we want to travel and relax."

Many provincial-level regions have introduced a health-code monitoring system to control people's movements.

Liang says the resort is temporarily closed to visitors who came from areas where the virus hit hard or have returned from abroad in the previous two weeks.

Most of Shanghai's top tourist attractions and all of its libraries had resumed business as of Wednesday. In early March, Shanghai Disney Resort partially resumed operations, with each of the reopened attractions running at limited visitor capacity and reduced hours. 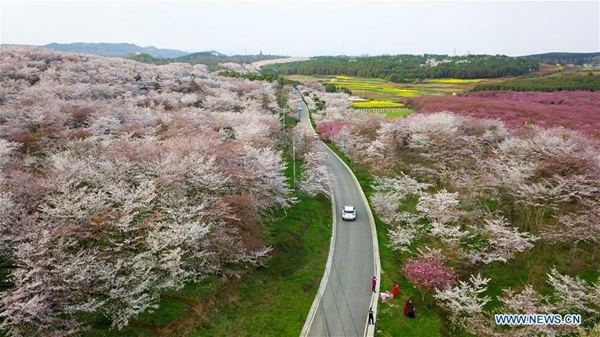 An aerial photo shows trees in blossom at Hongfenghu township in Qingzhen in Guizhou province.(Photo: Xinhua)

On Wednesday, the Ningxia Hui autonomous region issued a guideline allowing package-tour businesses among low-risk cities and counties within the region to return to normal. It also suggested allowing outdoor cultural venues, including tourist attractions and stadiums, to reopen, while indoor theaters, ballrooms and internet bars must remain shuttered.

Tourism is among the industries hit hardest by the epidemic.

The China Tourism Academy estimates that domestic visits will drop by 932 million in 2020 while the number will plummet most sharply in the first quarter-a negative growth of 56 percent compared with 2019. Tourism-driven revenues will drop by 1.18 trillion yuan ($166 billion) this year.

Known for its picturesque karst mountains and beautiful rivers, Yangshuo county in the Guangxi Zhuang autonomous region on Wednesday launched six measures to assist the industry. They include exempting or reducing rents for tourism enterprises, providing subsidies for reopened sites, and cutting taxes and fees for small and medium-sized enterprises.

Shanghai has provided financial aid for culture and tourism industries, including refunding deposits for travel agencies, allocating special funds for cultural and tourism development, and providing aid for loans.

Companies and individuals in the sector also took measures to save themselves. Livestreaming platforms and travel agencies have teamed up with attractions to make online sightseeing more accessible.

China's largest online travel agency, Trip.com, launched presale products in March, including more than 1,000 travel routes and tickets to over 300 attractions. It also started a revival plan involving 1 billion yuan for the industry with partners at home and abroad.

Xu Zihui, who owns a homestay near Huangshan Mountain, a UNESCO World Heritage Site in eastern China's Anhui province, has allowed customers to book discounted rooms for the period before June next year. She has received over 100 orders so far.

Industry experts say domestic tourism will take the lead in recovering despite the fact that the epidemic has not ended and the global tourism market is reeling.

China Tourism Academy president Dai Bin says the general management and emergency capacity of China's tourism sector have been enhanced during the epidemic prevention and control.

Jin Jianping, deputy general manager of Liaoning Tourism Investment Group, says: "The cultural and tourism industries are trying to use preferential policies to seize the opportunities presented by the upcoming holidays. Travelers will gradually come back, and the tourism market in China will enter a new phase of development after the epidemic."