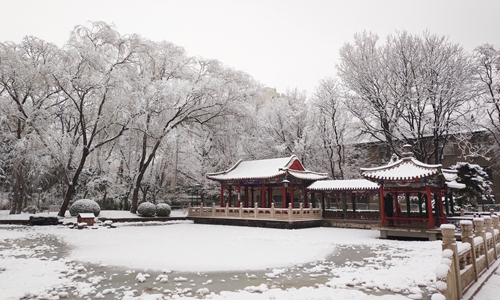 People in Beijing woke up Monday to find the city had been covered in a blanket of white snow, marking the first snowfall of 2020.

The snow started at about 5 p.m. Sunday in the western and southern parts of the city and lasted until 6 a.m. Monday morning.

The overnight snow hit most parts of the city with an average precipitation of 4.3 mm citywide, said the Beijing meteorological bureau.

The snowfall has reduced visibility and caused inconvenience for motorists, prompting the bureau to issue an alert for icy roads.

A total of 28 bus lines were affected as of 7 a.m. Monday morning. The Beijing Capital International Airport said flights might be delayed due to the snow.