Beijing on Saturday held a trial opening of the site for the upcoming 2019 Beijing International Horticultural Expo to test the reception capacity of the event. 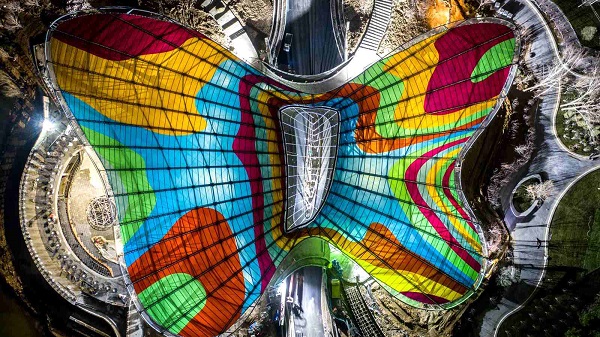 Night view of the Guirui Theater of the Beijing International Horticultural Expo 2019 at Yanqing District in Beijing, China. (Photos: VCG)

About 30,000 people, mainly local residents in Yanqing District in Beijing's northern suburb, which hosts the event, became the first group of visitors to the 503-hectare expo site at the foot of a section of the Great Wall.

Slated to kick off on April 29, the 162-day expo is poised to impress an estimated 16 million visitors from home and abroad with a huge collection of plants, flowers and eye-catching pavilions as well as ideas for green development.

More than 110 countries and international organizations, as well as over 120 non-official exhibitors, have confirmed participation, which will make it the highest attendance in the expo's history. 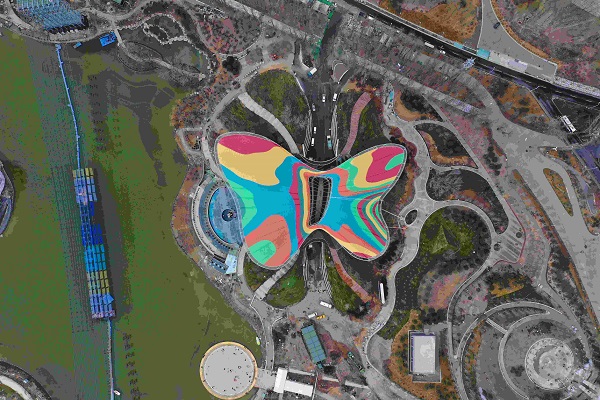 An aerial view of the Guirui Theater of the Beijing International Horticultural Expo 2019 at Yanqing District in Beijing, China.

According to the organizer, the expo's service group had 4,000 staff on duty Saturday to provide operation management, reception, and tourist and security services.

All 78 entrances to the expo were opened with 30 electric vehicles shuttling guests to and from the parking lot. Visitors enjoyed food and beverages and shopping of small commodities in the park.

Tim Briercliffe, secretary general of the International Association of Horticultural Producers, was among the visitors.

He was briefed on the city's preparations for the expo. Briercliffe believed the event's preparation work has gone well and that Beijing will do a remarkable job in presenting this expo to the world.