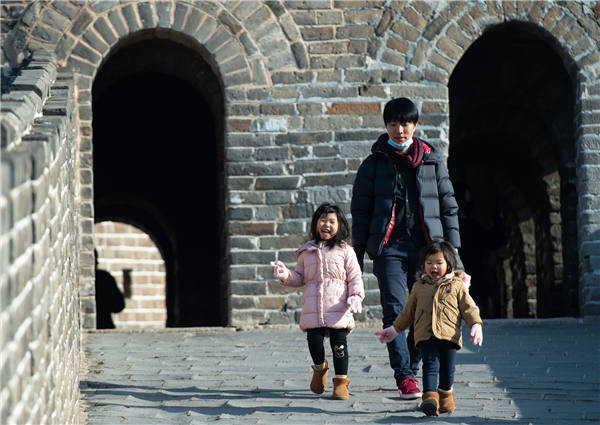 Experts discussed the integration of culture and tourism to boost travel consumption at the Capital Tourism Development Forum in Beijing in late December.

The forum held by the Beijing Tourism Society and Beijing Union University aimed to find solutions to better tap the capital city's cultural and tourism resources and optimize the tourism-business environment.

The pandemic is expected to cause a 50 percent year-on-year drop in domestic tourist visits and consumption for 2020, China Tourism Academy president Dai Bin says.

"Yet we can see that the massive tourism demand based on national consumption has never disappeared, and digitally driven smart tourism has continued to innovate," Dai says.

Dai says he's optimistic about tourism development in 2021, which is based on the country's goal to eliminate extreme poverty and become a "moderately prosperous society" (xiaokang shehui), as well as the positive results from the demand-side reform outlined at the nation's annual Central Economic Work Conference to stimulate economic development this year.

He expects pandemic controls, increased consumption and innovation-driven industry upgrades will become focuses of the tourism sector this year.

A group of scenic spots and resorts with outstanding cultural elements will be constructed, and red and rural tourism will be given support to improve travel-business development, and increase quality and supply.

The development of culture parks, including those related to the Great Wall and the Grand Canal, will move forward.

Beijing's tourism plan for 2021-25 has been formulated. Priority will be given to technical reforms and innovation to boost cultural and tourism infrastructure, enhance consumption and advance new business models, Beijing Municipal Bureau of Culture and Tourism deputy director Wang Yue says.

The goal is to comprehensively upgrade the capital's tourism quality and raise its profile to make it a first-class tourism city internationally, Wang says.

Five districts in Beijing have been designated as national demonstration zones for holistic tourism development.

"The suburbs are very active in this at the moment," Wang says.

He says that if the study-tour accreditation and vacations system for students could be adjusted, the potential of the study-tour market, which has accounted for over 25 percent of the global tourism market, could be greatly enhanced in China.

Since the pandemic has severely affected tourism worldwide, experts call for extra attention to changes in travelers' behaviors.

The public has shown a stronger awareness of risks, including hygiene and real-time tourist flows, says a Tencent survey published last year.

People are no longer putting the fame of a certain destination first but are paying special attention to whether that attraction has taken precautionary measures or has government endorsements, says Song Rui, director of the Tourism Research Center of the Chinese Academy of Social Sciences.

Song suggests tourism destinations and businesses take note of changes in public tourism services, such as emergency-rescue information delivery and visitor-flow warnings and management, which are increasingly important to tourists.

"Life or goods' production can be turned into new tourism-consumption modes, once creative and technical elements are added."

Destinations within two hours via high-speed rail from Beijing, including Tianjin, the Inner Mongolia autonomous region, and Hebei, Liaoning, Shanxi and Shandong provinces, should be integrated into the capital's travel circuit, he says.

"They would offer more support to Beijing this way."