As the inky night tinted the ridges and peaks with a shade of iron, bird banders were still working in a bird sanctuary in Suichuan county, Ji’an, East China’s Jiangxi Province.

Seeing a bird swoop down, Zeng Xiangpeng, a bird bander of the nature reserve, sprang up immediately and trotted towards it.

It was wryneck, a kind of woodpecker that eats ants, Zeng explained. The man disclosed that when he first came to the nature reserve in 2017, he was baffled by the little bird which is about the size of a palm.

The bird can wriggle its neck like a snake and turn its head almost 360 degrees, Zeng added.

Zeng dug deep into illustrated books available to search for information about the bird, but he still failed to figure out what kind of bird it was. The next day he finally knew the name of the bird after asking Zhong Pinghua, a consultant of the management bureau of the bird sanctuary. Zhong told him that wriggling their necks is a stress response of wrynecks when they are frightened.

“Zhong is like an encyclopedia. You can always find the answer from him,” Zeng said.

Zeng started to learn to distinguish birds when he was a freshman in Jiangxi Environmental Engineering Vocational College. And Zhong was his teacher then.

Talking about the change of their relationship from teacher and student to colleagues, Zhong said it is a relay of youth.

“We attach a metal ring with a unique number to a migratory bird and then free it. We expect to reveal the migration patterns of birds through follow-up investigation and tracking. This method is called bird banding in academia,” Zhong explained.

Two generations of bird banders have worked earnestly in the bird sanctuary over the past 18 years, accumulatively banding 34,516 migratory birds of 210 species, 49 families, and 15 orders, Zhong said, noting that their work covered about one seventh of the bird species in China.

In September 2002, a group of experts from the national bird banding center of China came to Suichuan county for investigation. Zhong served as a guide for them. During the investigation trip, an old expert with grey temples taught Zhong everything he knew, showing him how to remove trapped birds, measure them, and attach rings to them. 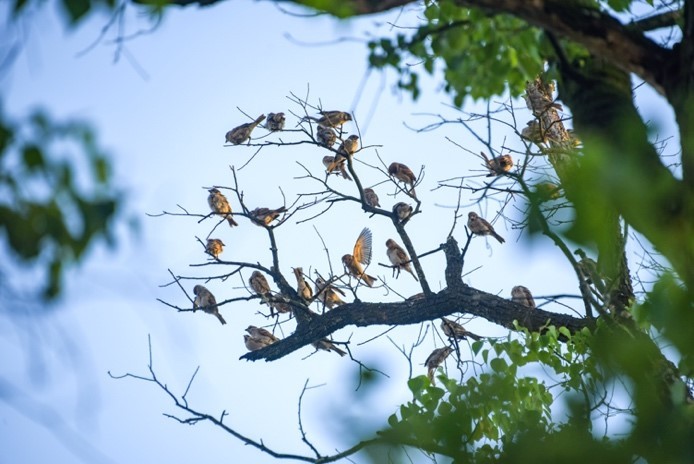 Birds rest in a tree in a yard in Suichuan, East China’s Jiangxi Province on June 12. Photo by Xiao Yuanpan/People's Daily Online

A certifying commission headed by academician of the Chinese Academy of Engineering Ma Jianzhang and made up of ten experts from such organizations as China Ornithological Society and Sun Yet-sen University reached a consensus that the passage of migratory birds in Suichuan county is one of the important passages for bird migration in China and also an important resting area for migratory birds in the middle and lower reaches of the Yangtze River.

As new progress is made in science and technology with each passing day, bird banding is also increasingly empowered by technologies.

In 2018, the bird sanctuary of Suichuan county for the first time installed satellite trackers on 16 migratory birds to get information about the migration routes of birds in a real-time manner.

According to Zeng, there are 2,165 species of vascular plants, 784 species of insects, and 280 species of macro fungi in the bird sanctuary, which could provide adequate food for migratory birds.

Although concentrated work on bird banding only last for about 50 days every year, banders work in the area 365 days a year, Zeng said.

So far, the bird sanctuary has witnessed an increase in the species of migratory birds for eight years in a row, and enriched the record of bird distribution in Jiangxi Province with the discovery of four new species including white-tailed robin and black shrike.