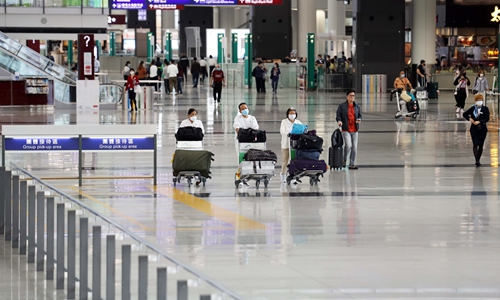 The blow to the tourism industry in Hong Kong continued as the city received only 455 mainland visitors during the May Day holidays: the smallest number in 17 years.

Some 5,900 people entered the city during the first four days of the May 1-5 golden week, of whom nearly 90 percent were Hong Kong residents, according to data released by the Hong Kong immigration department.

By comparison, more than 1.06 million people visited Hong Kong last year, of whom nearly half a million came from the mainland.

Visitors from the mainland need to go through 14 days' quarantine upon arrival in Hong Kong, according to Hong Kong regulations.

In order to restore peace and spur development, former Hong Kong chief executives Tung Chee-hwa and Leung Chun-ying launched the Hong Kong Coalition on Tuesday, an alliance that aims to reinvigorate the Hong Kong economy and restore the rule of law to boost investors' and law enforcers' confidence in the city.

These districts were major flashpoints during the extradition bill protests that severely damaged the city's economy and social security over the past months, the paper noted.

The instability hurt the confidence of the world in the Hong Kong economy, Li said.

A shop owner in Kowloon, surnamed Wong, told the Global Times that he had a daily turnover of HK$5,000 to HK$6,000 during the May Day holiday last year due to a large number of mainland tourists, but now he is struggling to cope with the lack of daily sales.

Cui noted that compared with last year, the tourism industry in Hong Kong suffered a loss of 100% during the May Day holiday this year. If quantified, losses to the tourism, retail and transport sectors are estimated at more than HK$10 billion over the May Day period.

Travelers account for a third of Hong Kong's total retail spending, mainly due to discretionary travel and visitor spending, Chui said. "I cannot imagine the huge impact on Hong Kong if passenger spending were to disappear permanently."