Blizzard warnings were posted from Colorado to Minnesota on Wednesday and wildfires were a concern in New Mexico, Texas and Oklahoma as the second so-called "bomb cyclone" storm in less than a month hit the central US, raising the prospect of renewed flooding in the already drenched Midwest. 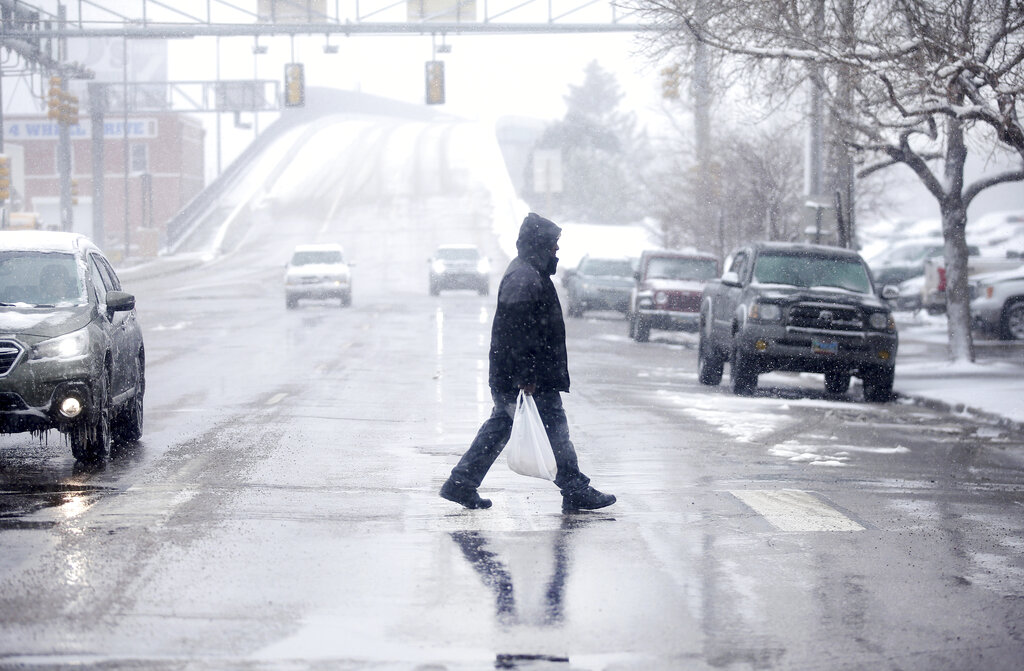 A pedestrian walks across Warren Avenue during a blizzard warning hitting southeast Wyoming and the Colorado Front Range on Wednesday, April 10, 2019, in Cheyenne, Wyo. (Photos: AP)

Heavy snow disrupted ground and air travel Wednesday. Roads became impassable and visibility was down to a few feet in northeastern South Dakota due to heavy snowfall. About half of the daily flights at Denver International Airport were canceled.

Up to 2 ½ feet (0.61 meters) of snow was expected to fall in parts of eastern South Dakota and southwestern Minnesota, the National Weather Service said. Winds in excess of 50 mph (80.46 kph) also were expected, creating life-threatening conditions.

"We're calling it historic because of the widespread heavy snow. We will set some records," said Mike Connelly, a weather service meteorologist in Aberdeen, South Dakota.

Transportation officials closed Interstate 29 from east central South Dakota to the North Dakota border and said other stretches of major interstates were likely to close as conditions deteriorated.

Numerous traffic crashes were reported in northeastern South Dakota, and the storm knocked out power to thousands of homes and businesses in Sioux Falls.

Officials in Colorado closed a 150-mile (241-kilometer) stretch of Interstate 76 from just northeast of Denver to the Nebraska border, and Gov. Jared Polis activated the National Guard in case troops are needed to rescue stranded motorists.

Multiple crashes in Minnesota along a snowy stretch of Interstate 35 prompted officials to close about 10 miles (16 kilometers) of the highway about 50 miles (80 kilometers) south of Minneapolis .

In Nebraska, the State Patrol was sending additional troopers into the state's panhandle, and officials closed Interstate 80 in that region.

"This storm is going to be dangerous," Patrol Maj. Russ Stanczyk said.

An unusual but not rare weather phenomenon known as "thunder snow" — snow accompanied by thunder and lightning — was reported in central South Dakota.

"It's essentially a thunderstorm, but it's cold enough for snow," Connelly said.

The weather service posted an ice storm warning into Friday morning for a portion of southern Minnesota, saying up to three-fourths of an inch of ice could accumulate on power lines, leading to outages.

To the west, the looming spring blizzard in the Rockies impacted flights, school classes, government functions and even baseball.

Major League Baseball's Colorado Rockies postponed an afternoon game against the Atlanta Braves until August. Many school districts in Colorado and Wyoming canceled or shortened classes. Local governments, including in Denver and Cheyenne, Wyoming, and state government in the Denver area closed offices early.

Winds in excess of 50 mph (80.46 kph) were combining with low humidity and an unstable atmosphere to create critical fire conditions in the three states. Forecasters in New Mexico said the winds also would make travel difficult on north-south oriented roads such as Interstate 25. In southern New Mexico, the US Army's White Sands Missile Range closed Wednesday because of the high winds.

The storm technically met the scientific definition of what's commonly known as a "bomb cyclone," said David Roth, a forecaster at the National Weather Service's Weather Prediction Center in Maryland.

The weather phenomenon with a complex scientific definition essentially entails a rapid drop in air pressure and a storm strengthening explosively. What is more important than the term is the storm's impacts, which are likely to be similar to last month's storm , Roth said.

That blast dropped heavy snow and led to massive flooding in the Midwest that caused billions of dollars in damage in Nebraska, Missouri, Iowa and South Dakota.

"Hopefully this time it will be a slow snowmelt," Roth said.

Forecasters said this week's storm will swell rivers again, though likely not to the levels seen last month due to the absence of a wet snowpack on frozen ground this time around.

Cover image: Ice forms on a calf at a ranch outside of Kilgore, Neb., Wednesday, April 10, 2019. A bomb cyclone storm bringing heavy snow and strong winds to several Rockies and Plains states is making travel difficult in many areas and impossible in others.