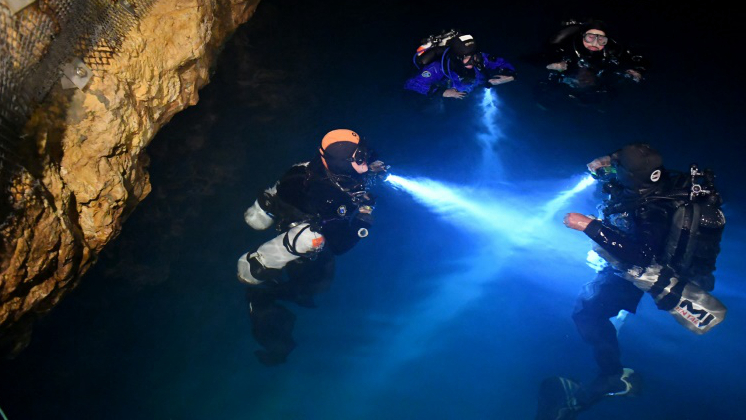 The underwater Janos The Molnar cave system, named after the Hungarian pharmacist who discovered it in the 19th century, has become a hot tip for diving aficionados. (Photo: AFP)

Not every diver's dream is to watch shimmering shoals of fish swim through coral reefs in dazzlingly blue seas.

For Laura Tuominen, the ultimate diving experience is not to be found in the Red Sea or the Caribbean, but in a labyrinth of spectacular underwater caves beneath the pavements of Budapest.

The Hungarian capital is already famous worldwide for its steaming hot spas and thermal baths.

But the underwater Janos Molnar cave system, named after the Hungarian pharmacist who discovered it in the 19th century, has become a hot tip for diving aficionados.

Around seven kilometers (4.4 miles) in length and previously open only to scientific expeditions, the cave became accessible to the public – that is, qualified divers – when a diving center was opened here in 2015.

"We are under Budapest! It's amazing!" shouts Tuominen, a 39-year-old Finnish anaesthesiologist and passionate amateur diver, as she jumps into the warm waters from a platform mounted in the narrow space at the bottom of the entrance tunnel.

She is one of a group of hobby divers and speleologists, wearing dry suits and carrying double cylinders of compressed gas on their backs, who then descend into the gloomy waters, the light from their torches gradually fading out of view.

The group is accompanied by a diving center staff member who directs them with the help of "guideline" cords through the maze of narrow passageways and cavernous cathedral-like chambers. 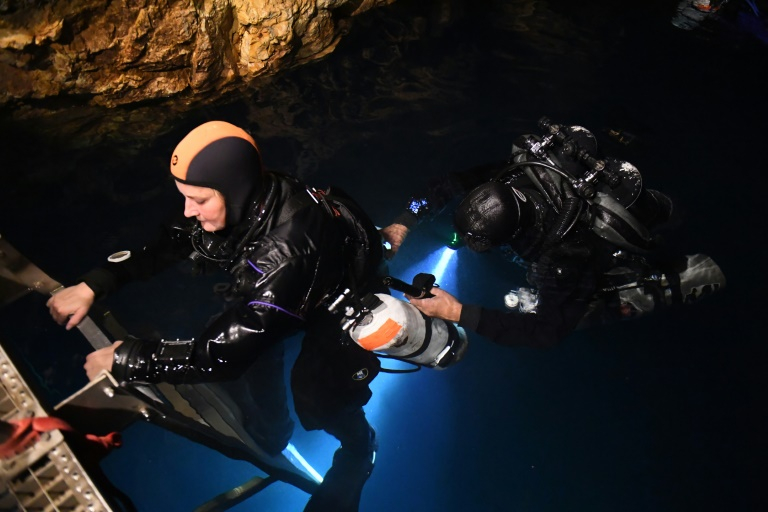 A hobby diver wears dry suits and carries double cylinders of compressed gas on her back. (Photo: AFP)

"It's the only underwater cave in Budapest open to divers. Speleology is a niche market. It doesn't have mass appeal. And our urban location makes us special. It's very, very rare," says Attila Hosszu, who has run the center since it opened.

The advantage of being underneath a city is that "you don't have to haul your equipment up a mountain or down a deep valley to get here," Hosszu adds.

The entrance to the center is a discreet metal door near one of Budapest's main boulevards and just a block away from the Danube river that separates the city's two halves, Buda and Pest.

According to the diving center's website, the cave was formed many millennia ago, when the geological fault line on which Budapest is situated cracked. The ascending thermal water ate into the rock to create caves close to the surface.

Explorations from the 1950s began to reveal the full extent of submerged canyons, halls and passageways. (Photo: AFP)

"You can see amazing stalactites and stalagmites in Mexico. But you have to travel for days to get there. Here, you just walk in and dive, it's very exciting," says 38-year-old Russian Irina Litvinenko after getting off the tram on her way to the center.

Outside on the streets, the autumn wind is blustery. But inside the center, the air is still warm and humid, making the divers sweat as they get their equipment ready.

Explorations from the 1950s began to reveal the full extent of submerged canyons, halls and passageways.

But until the diving center opened three years ago, only scientists were permitted entry to explore or collect samples for laboratory examinations. 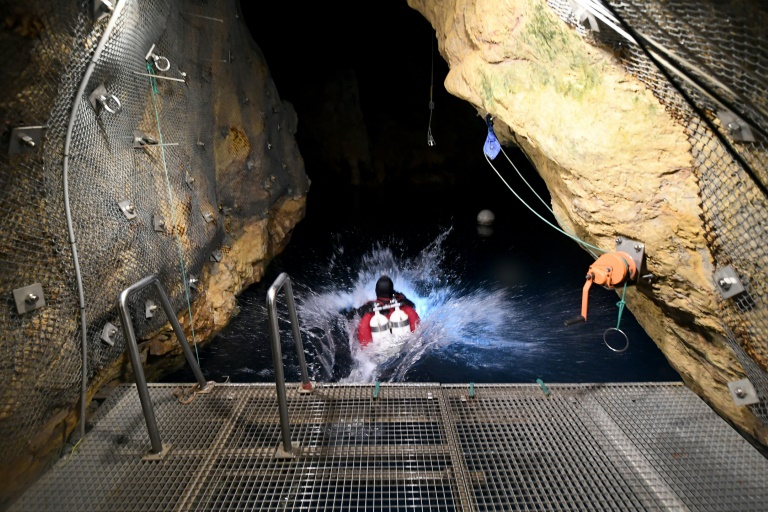 The cave was formed many millennia ago when the geological fault line on which Budapest is situated cracked. (Photo: AFP)

Zoltan Bauer, who has been guiding groups through the cave since 2015, says visitors come mostly for the stunning underwater landscapes.

"There are only a few creatures in the cave," the 29-year-old says, referring mainly to tiny crustaceans. "But what I really like is the shape of it, how it looks, its beautiful formations."

"Usually, cave diving is about going in and out of a tunnel. But this is like a Swiss cheese, you go down one hole and come back through another," she enthuses.

"For me, it's super-relaxing. In this technological world, silence is precious."

The water's balmy temperature of 20-27 degrees Celsius (68-80 degrees Fahrenheit) year round is another draw, says Marton Illes, a 37-year-old IT developer from Budapest, who lives nearby.

"This is my 15th dive here, but I'm just scratching the surface. There's so much to see down there, so many passages," says the part-time diving instructor.

To preserve the cave's unique ecosystem, the daily number of divers is limited to 30.

The depth also determines the time limit, currently 150 minutes, but no-limit dives may be coming soon.

Geologists, chemists, biologists, and maintenance engineers repairing safety ropes rub shoulders with tourists in the tunnel before a dive.

Marine biology and ecology expert David Brankovits – a regular visitor – says the "creatures found here cannot be found anywhere else, scientists can study their evolution, and their food and energy sources".

And as long as tourist divers respect the cave – a protected site since 1982 – there are no concerns about them coming here, Brankovits says.

Cover: The underwater Janos The Molnar cave system, named after the Hungarian pharmacist who discovered it in the 19th century, has become a hot tip for diving aficionados. (Photo:AFP Photo)