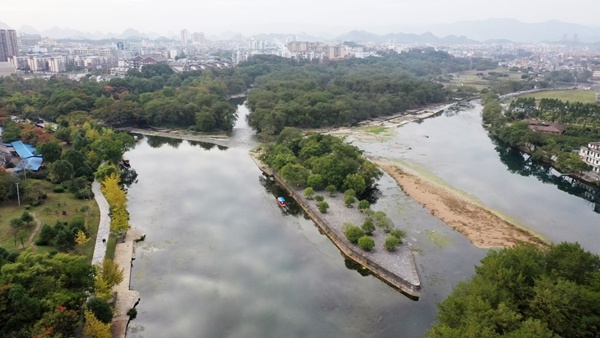 The Lingqu Canal in the Guangxi Zhuang autonomous region is one of the world's oldest and most well-preserved artificial canals. (Photo: Xinhua)

Thrusting a pole into the water, Ai Junming, 58, weaves his way through a lengthy canal on his aged wooden boat, framing a quaint tableau for throngs of nostalgic visitors.

Three decades on, though motorboats have taken hold of the tourist market, a punting tour, guided by punters like Ai on the Lingqu Canal in South China's Guangxi Zhuang autonomous region, has become an iconic experience not to be missed.

"To eschew any oil leakage of engines that could pollute the water, we abandoned the powerboats for the environmental good," Ai says.

Lingqu is one of the world's oldest and most well-preserved artificial canals and was built more than 2,000 years ago during the Qin Dynasty (221-206 BC) to serve the emperor's ambition of conquering the tribes dotted in mountainous South China. During the Song Dynasty (960-1279), local officials jerry-rigged dozens of water gates to retool the canal for better irrigation of the nearby farmlands.

The conduit, winding some 36.4 kilometers through the region, thus became a vital prop for Zheyuan village in Xing'an county where Ai was raised, making the area an agriculturally developed one in the following centuries.

"Before 1937, when the railway was being revamped in the region, the Lingqu Canal was still a bread-and-butter artery for transportation," Ai says. At that time, the generations of his grandfather and uncle used to ship salt for chartered merchants and Ai's father followed suit, running cargo for a living.

But as the 20th century drew to a close, growing towns in the wake of urbanization and the introduction of modern transport encroached on the surrounding farmland, and soon eclipsed the canal. To find their feet, villagers left their hometown and ditched their farmland for jobs in bigger cities.

In the early 1980s, the country fell back on tourism to help the ancient waterway make a comeback. In 2017, the surrounding region was listed as a national water conservancy scenic spot, and one year later, the Lingqu Canal was inscribed on the World Heritage Irrigation Structures. 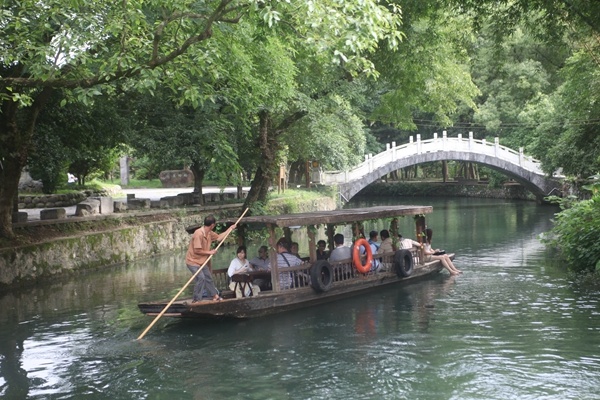 Along the river, the leisure and hospitality sector provides a new spur for the region and the canal to pick up steam.

To date, over 500 residents from around 150 households in Nandoukou, a smaller village within Zheyuan, have benefited from the region's revival, working as boatmen, cleaners, security guards or running restaurants and food trucks at the scenic spot. Villagers can also cash in about 400,000 yuan in total as dividends from the firm that was authorized to manage the spot, according to Jiang Gongyuan, head of Zheyuan village.

"I started my career as a boatman at the age of 23. My entire family sees the canal as an integral part of our lives," says Ai.

To preserve the cultural heritage and bonanza, the National Cultural Heritage Administration funneled some 166 million yuan into the county, supporting its preservation and refurbishment. The local government also raised more than 80 million yuan to set up a culture exhibition center, displaying the stories behind the canal to visitors.

The rudiments of modern water gates can be observed along the waterway, making Lingqu one of the most ancient canals equipped with such gadgets, according to Liu Jianxin, president of the Guangxi Xing'an Lingqu Historical and Cultural Association.

"As the people and the government go all out in their efforts to explore and preserve the old canal, I have confidence that the waterway will become a more riveting tourist destination and the village will get a fillip in the meanwhile,"Liu says.