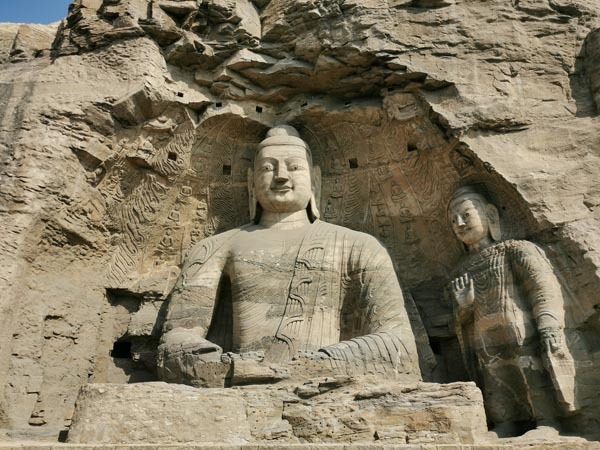 The National Cultural Heritage Administration and Ministry of Culture and Tourism jointly released an announcement last week demanding administrations of all ancient grotto temple sites across the country to set caps on the number of daily visits to ensure longevity of such cultural heritage and the safety of tourists.

Grotto temples, which were carved into mountains or rocks for religious purposes, were introduced into China from India and Central Asia in the 3rd century, and became a pillar of Chinese Buddhist art throughout ancient Chinese history.

Mogao Caves in Dunhuang, Gansu province, Longmen Grottoes in Luoyang, Henan province, Yungang Grottoes in Datong, Shanxi province, and a series of Buddhist grottoes along the ancient Silk Road, have been inscribed onto the list of UNESCO World Heritage sites.

In May, President Xi Jinping visited Yungang and called for protection of grotto temples to be given priority over tourism development. He also urged better display of their cultural legacies.

Nevertheless, the new announcement points out that the boom in the number of tourists during peak seasons and holidays "overwhelmed" some of the grotto sites.

Over 265,000 people poured into Longmen Grottoes during the eight-day National Day holiday in October, a 2.3 percent increase compared with last year, despite the effect of COVID-19.

The announcement sets out a requirement for all administrations of the country's grotto temples to map their own capping plans by the end of this year, which should be based on closer supervision and balanced distribution of visits at different hours. Their evaluations of the new policies need to be handed to the National Cultural Heritage Administration by Jan 31, 2021.

It also calls for the administrations of grotto sites to avoid "excessive entertainment and business development" in areas surrounding the cultural treasures.

Caps on the number of daily visits have already been set in some of the grottoes.

For example, Mogao Caves adopted the policy in 2014. All visitors to the site have to be organized in guided tours, and while up to 18,000 people are allowed in the site, 12,000 of them can only visit four designated caves that offer enough space.

In Yungang, 7,500 visitors are allowed in every morning and afternoon, respectively. And the daily cap for Kizil Grottoes in the Xinjiang Uygur autonomous region, the longest surviving grotto temple site in China, is 1,000 people.

Based on further scientific analysis of data, tailored maximum capacities are to be set for key spots on visiting routes and inside grottoes, as demanded in the announcement, so are timely alert systems and facilities to handle emergencies.

The National Cultural Heritage Administration and Ministry of Culture and Tourism will launch an inspection of the work in the first half of 2021.