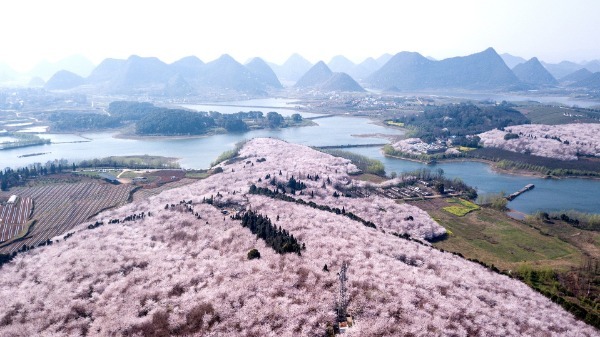 Cherry blossom is now in full bloom in many areas of China.

It is also a major attraction in Japan, where it is known as sakura and has become a national icon. However, it is claimed that the cherry tree and its blossom originated in China.

According to the association, the cherry tree is believed to have originated in China's Himalayan region.

"China has a 2,000-year history of cherry blossoms in royal gardens. In the Tang Dynasty (618-907), these delicate flowers prevailed thanks to private gardeners," He said.

"But what is a pity is that cherry blossom has brought enormous tourism income to countries such as Japan and the Republic of Korea, but in China the economy has yet to see the full benefit of it."

In recent years, cherry blossom's popularity has encouraged more Chinese to plant the trees at home. Local governments and industry advocates are promoting such planting in the hope of making blossom-filled parks a global attraction.

According to the association, more than 25 Chinese cities have parks where cherry trees predominate, and the number is expected to rise rapidly. 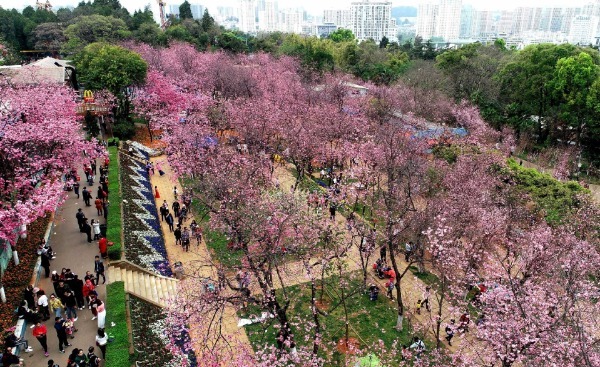 In Guangzhou, capital of Guangdong province, streets lined with cherry trees are home to high-rise office buildings in the central business district.

In Beijing, the 136-hectare Yuyuantan Park boasts 2,000 cherry trees with more than 20 different species. A Cherry Blossoms Culture Festival is held in the park annually from March to May.

In Wuxi, Jiangsu province, people from all over the world visit the Tortoise Head Garden for its stunning array of cherry trees.

But he said the Chinese way is the most profitable.

"In Japan, the falling blossom is typically linked to fearlessness or life's fleeting moments, whereas the Chinese appear to regard it as the importance of kinship and romantic love," He said.

"This cultural difference means Chinese prefer to buy products related to cherry blossom, as the flowers provide a good choice for gifts," he added.

Wuhan University in Hubei province is arguably the best-known location in China to view cherry blossom. Tourists from across the country visit the university in spring to enjoy the trees in full bloom.

Streets and stores near the university target millions of visitors with products featuring food, handicrafts, musical instruments and artworks made from the blossom.