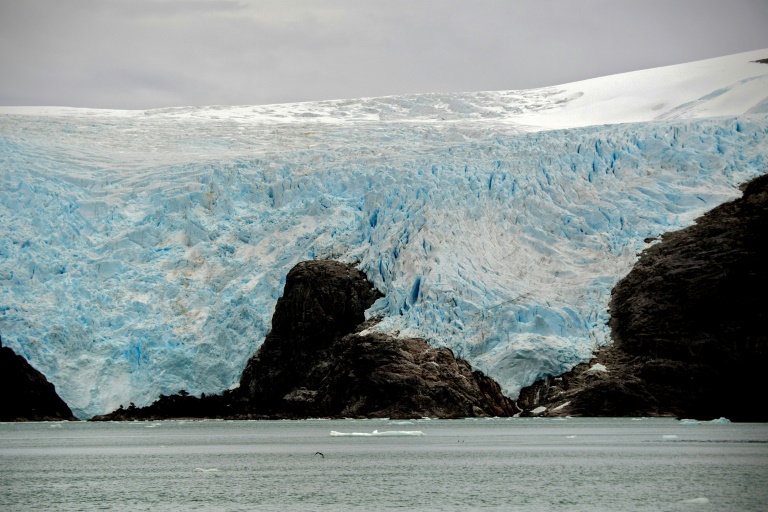 In Seno Ballena, a fjord located in the interior of the Strait of Magellan in the Chilean Patagonia, the waters are shedding light on the future of climate change and its effects on marine organisms

In one of the most inhospitable places on Earth, the southernmost part of Chile's Patagonia region, scientists are studying whales, dolphins and algae in order to help predict how climate change will affect the world's oceans.

For the study, four researchers from the Austral University of Chile embarked from Punta Arenas for the remote Seno Ballena fjord.

The fjord currently produces the kind of conditions that should be seen in other marine systems in the next few decades, when dramatic changes are expected in the environment due to increased carbon dioxide emissions in the atmosphere and the melting of glaciers.

"This place is like an actual experiment in nature because it allows us, without needing to conduct experiments in the lab, to know what will happen without imagining it," marine biologist Maximiliano Vergara told AFP.

Reaching the fjord is no easy task -- they had to negotiate the treacherous Strait of Magellan that connects the Pacific and Atlantic Oceans for a day and a half aboard a small raft adapted for scientific research, with winds exceeding 100 kilometers (60 miles) per hour and glacial temperatures.

On site, they take readings from a system of sensors that provide a constant stream of data from water samples taken every three hours.

The researchers are analyzing the chemical, physical and biological variables of the waters, which show lower levels of pH, salinity and calcium, especially in the most shallow areas, as a consequence of climate change.

"What we're doing at the moment is establishing our information baseline," Vergara said.

The researchers are analyzing the chemical, physical and biological variables of the waters, which show lower levels of pH, salinity and calcium, especially in the most shallow areas, as a consequence of climate change.

"What we're doing at the moment is establishing our information baseline," Vergara said.

But climate change poses a threat to its ecosystem as the melting of a glacier on Santa Ines island and increased rainfall have led to rising levels of freshwater.

If that continues, it would have dire consequences for whales as the plankton they feed on could disappear.

"A change in the microalgae could generate changes in the secondary structure (of the marine system) or the animals that feed on these," marine biologist Marco Antonio Pinto told AFP.

Under normal circumstances, when there is an abundance of microalgae, these provide food for the zooplankton that subsequently nourish the food chain all the way up to whales, said Pinto.

The expedition members are taking samples from eight stations around Seno Ballena to measure the effects of the melting glacier on Santa Ines, which has accelerated to such an extent that rocks have appeared that weren't visible during their last trip in April.

"The waters of high latitudes, both in the northern and southern hemispheres, contain a huge amount of biological and physiochemical information that can be used as a basis to take crucial decisions for environmental preservation projects in developed countries," said biologist Maximo Frangopulos, a professor at the University of Magellanes and leader of the expedition.

The scientists are worried about the potential for a red tide -- a phenomenon brought on by excessive numbers of microorganisms that absorb a huge amount of oxygen and produce toxins, resulting in the deaths of much marine life.

For now, researchers have noted a slight drop in the number of humpback whales but an increase in other species such as sea lions, which previously were not present in that region, and dolphins.

They also found a lower concentration of calcium carbonate, something which can affect the shells of marine organisms such as mollusks or krill, a staple of a whale's diet.

"It's like a puzzle that we're trying to put together... to see how climate change can affect not just the baseline marine system, but also the large mammals, something that would have a social and economic impact on the region," said Pinto.

The crab, a species vital to the economy of the region around the strait, is another that could be affected as it needs calcium to harden its shell.

The scientists are set to return to the area during the Southern Hemisphere winter to obtain new samples -- and to see what other secrets the waters in this area of Chilean Patagonia can reveal.