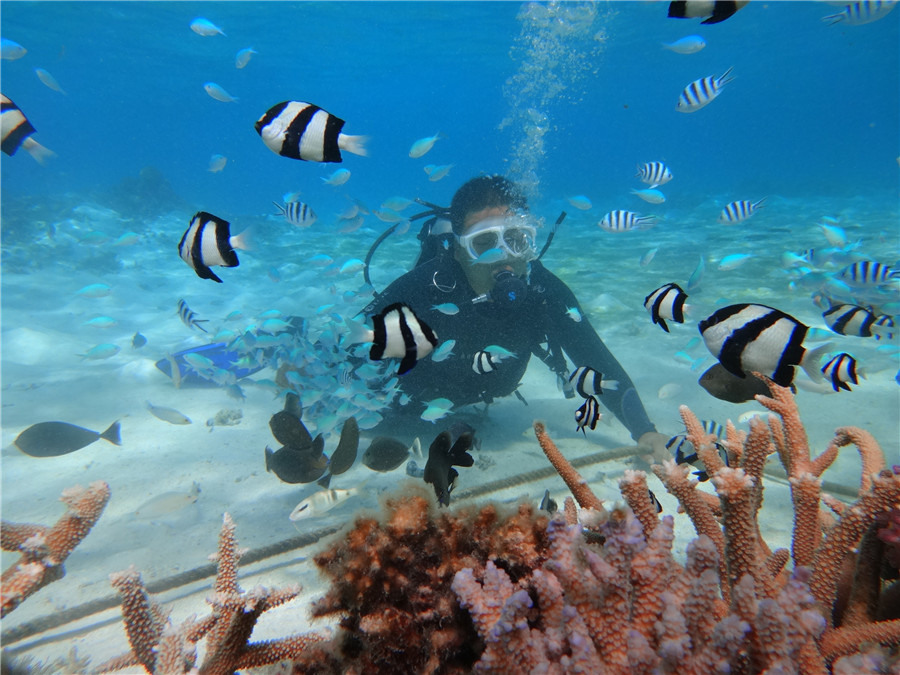 A tourist scuba dives under the sea around Saipan, the northern Mariana Islands in the western Pacific Ocean. (Photo: China Daily)

As the world's second largest economy with a population of more than 1.3 billion, China has made significant contributions to the development of world tourism in recent years, a senior official of the United Nations' World Tourism Organization (UNWTO) said.

The UNWTO recorded a total of 1.322 billion international tourist arrivals in 2017 and is expected to continue its strong momentum of development this year.

In an exclusive interview with Xinhua on the sideline of the 30th Joint Meeting of the UNWTO Commission for East Asia and the Pacific and the UNWTO Commission for South Asia held in Nadi, Fiji's third largest city, Zhu Shanzhong, executive director of the Madrid-based UNWTO, told Xinhua that the organization has attached great importance to China's tourists market, believing that the world tourism could not have enjoyed such remarkable development without the Chinese outbound market.

According to Zhu, 1 in 10 persons are currently involved in the world tourism, which reported last year a considerable amount of income, about 11 percent of the global gross domestic product (GDP). International tourist arrivals worldwide increased by 7 percent to 1.322 billion in 2017. Europe received 671 million, up 8 percent from that in 2016, while the Asia-Pacific recorded 324 million, an increase of 6 percent year-on-year.

Buoyed by rising incomes and easier visa processes, China's outbound travel hit another record last year by having 130 million overseas trips with $115.29 billion in spending. This means that the Chinese market last year had a 7 percent jump in overseas trips and a 5 percent rise in overseas spending over 2016, he said, adding that the number of China's outbound tourists now accounts for 10 percent of the total of global tourists.

"In 2012, China became the world's top spender in international tourism and has remained so ever since. We can say that this is indeed a great contribution to the world tourism market and no country in the world can match China in this regard," Zhu said.

He also voiced satisfaction with the Chinese tourists' reasonable travels and spending as well as their improved behaviors, saying that they deserve being treated with hospitality and respect as they have a higher quality than ever before during overseas trips.

"Excessively protecting their legal rights as tourists or by using irrational means will hurt the Chinese tourists' interests and tarnish the national image," Zhu said.

The UNWTO official expressed the hope that the world tourism will continue its strong momentum of development in the years to come and China will continue to play an important role in this process.