TRAVEL China has its own take on burgers and burritos

China has its own take on burgers and burritos

When time is of the essence, an on-the-go meal like burger, sandwich or burrito is the solution. 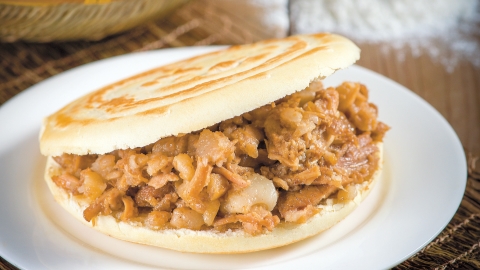 Many cuisines have their own versions of the burger with bread, vegetables and proteins combined as one. Across China many different kinds of baked buns with fillings are enjoyed every day.

On popular delivery apps, it’s easy to find snacks such as roujiamo and guokui topping the sales charts, as they are fast to make, easy to transport and, most importantly, delicious.

This week, we’ll take a look at some of the popular Chinese-style buns with fillings. 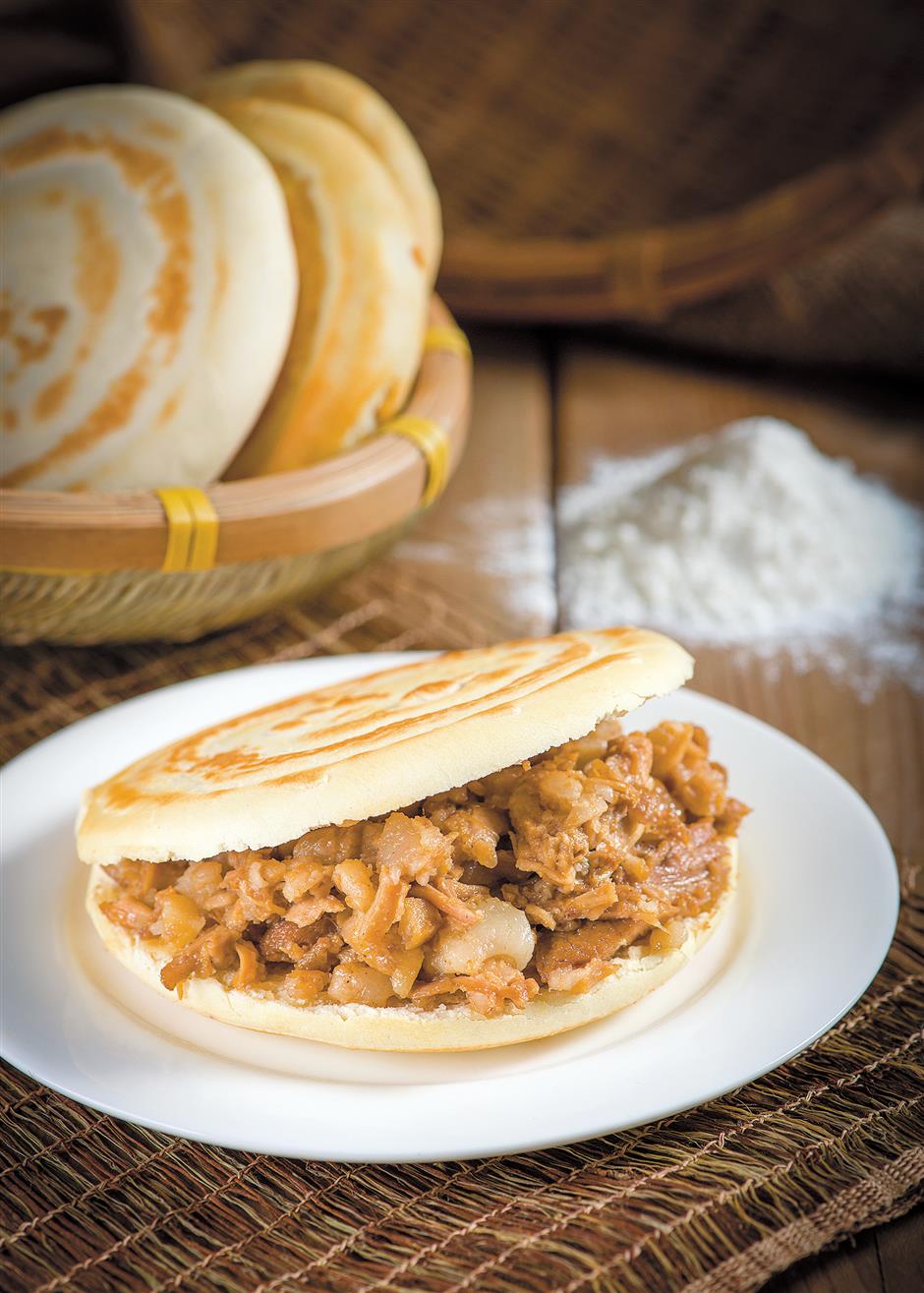 Roujiamo, which translates as meat-between-bun, is the Chinese-style burger from the northwestern province of Shaanxi that has gained a loyal following around the world.

In New York, Xi’an Famous Foods is a local legend. From its beginnings as a small basement stall in 2005, it brought the little-known Shaanxi cuisine to the United States and customers have been loving their bold-flavored roujiamo, liangpi (cold noodle) and biangbiangmian (wide hand-ripped noodle). The family-owned business has grown to 15 locations in Manhattan, Queens and Brooklyn.

Shaanxi cuisine is about hearty meat and staple dishes that are rustic and heavily flavored with lots of chili and cumin, whereas in Shanghai the local cuisine is lighter, sweeter and more delicate. Finding good roujiamo used to be a challenge, but since last year, the city has seen a growing number of roujiamo places and chain brands that are easing the longtime shortage of northern flavors (besides the Lanzhou hand-pulled noodle places).

Roujiamo is a simple food, yet the craftsmanship involved in making them is not easy to master.

First off, the soul of roujiamo is a bun known as baijimo, which must be hand-made and served hot right from the oven. It’s essentially a soft baked flatbread with a thin, crunchy skin, and the color must be white on the outer edge with golden gradients in the middle.

The flavor of baijimo is a little similar to pita, but the texture is denser and firmer without the interior pocket. The small, round and flat baijimo is sliced in the middle to hold the fillings. 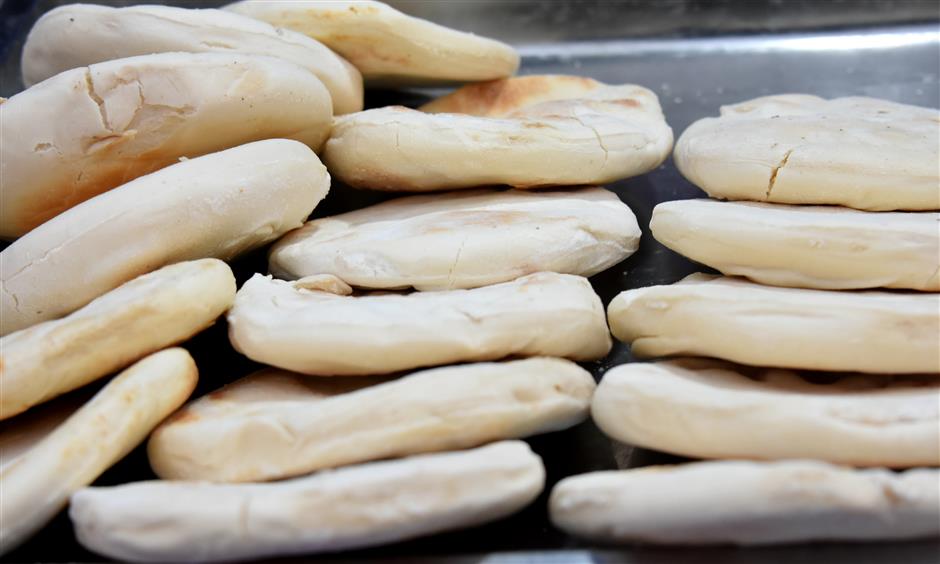 The name baiji has the same pronunciation as Baiji (白骥) Town where the bread originated, but baiji (白吉) is easier to write.

Then, the heart of the dish is the succulent filling of stewed pork known as lazhirou. The cut of pork used is the rich pork belly with skin on, and it’s stewed with more than a dozen kinds of spices and seasonings for hours until the meat breaks apart easily.

When filling the bun with lazhirou, the pork is chopped into smaller pieces that still have a meaty texture and a little bit of the rich stock is added to boost the flavor. Fat is essential in this dish because it provides moisture in the filling as well as rich flavors, though the sellers will also provide the option of lean meat for people who can’t eat the fatty pork.

Beef and lamb are also used to make roujiamo, but lazhirou uses pork.

It’s usually eaten for breakfast with a bowl of congee.

In Shanghai, you can also find another style of roujiamo from Tongguan in Shaanxi Province, which has a very different bun with many crispy, swirled layers on the outside while still maintaining some softness on the inside. It’s especially popular among young people because of the strong contrast of texture between bun and filling.

Roujiamo is not only one of the most popular snacks in China, but has also impressed many diners abroad. 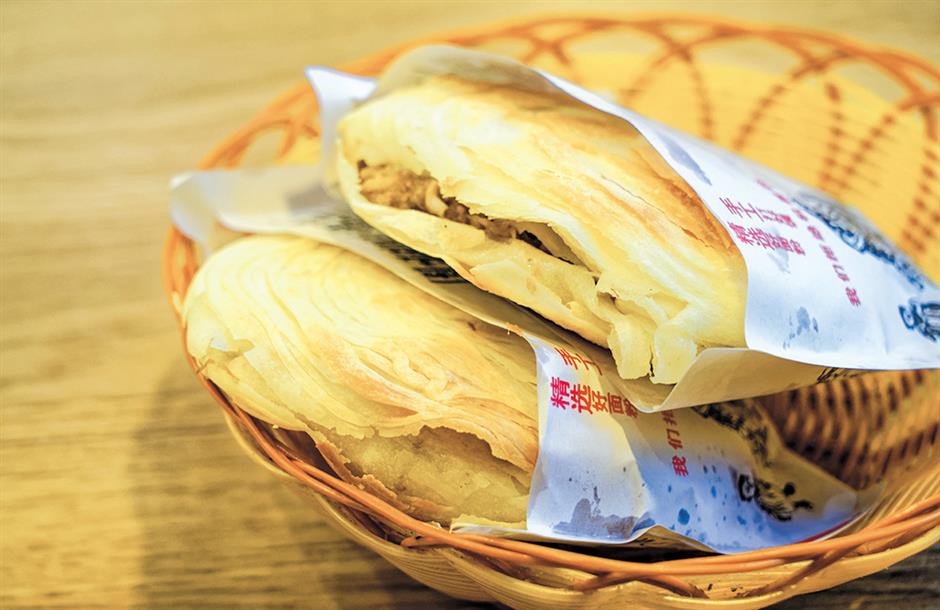 In northern Chinese cuisines, there’s another burger-style food called huoshao that’s similar to roujiamo but is much more flexible in its recipe.

Also baked in a clay oven, huoshao is more common in the provinces of Shandong, Henan, Hebei as well as the cities of Beijing and Tianjin.

The dough used to make huoshao is leavened much more than that used in baijimo (usually doubling the size of the dough so the texture is airy), and it’s baked in a pan to set the shape before being fully cooked in an oven. The color of huoshao is darker and charred, hence it has a more prominent flavor.

Some buns have sesame seeds sprinkled on top to boost their fragrance.

There are two main varieties of huoshao — the kind with meat fillings already sealed in the bun and baked until fully cooked, and the plain bun served with fillings added after.

One of the most famous huoshao dishes is donkey meat huoshao from the Baoding area of Hebei. It stuffs donkey meat stewed with lots of spices into fresh, hot huoshao. Donkey meat has a similar taste to beef, but it’s tenderer and low in fat. The dish dates back to the Ming Dynasty (1368–1644). 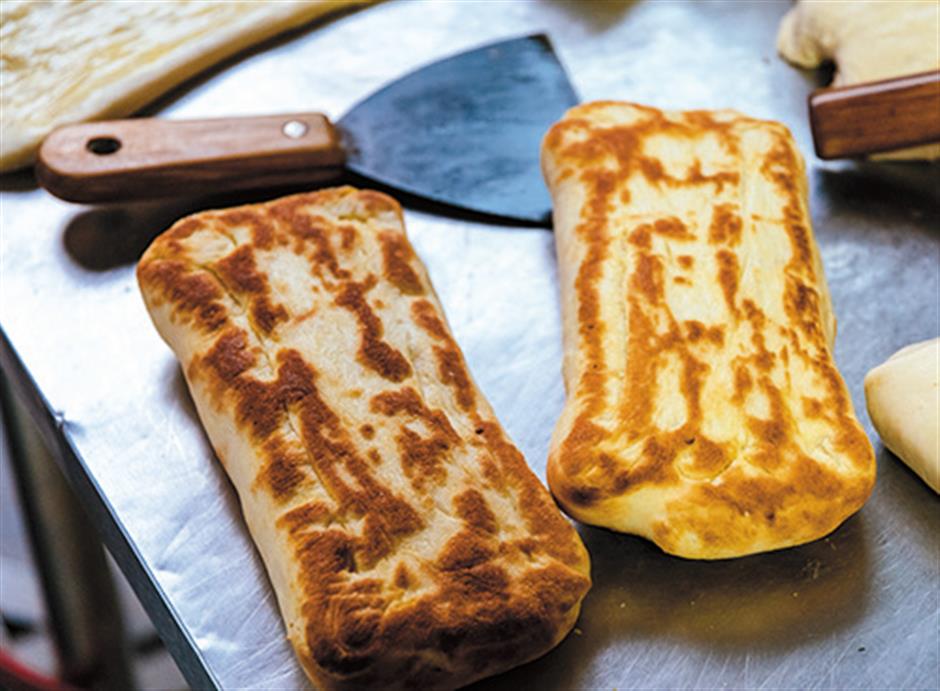 Luzhu huoshao is a humble Beijing snack originating in the Qing Dynasty (1644-1911), and a serving of the dish consists of pig intestines, lungs, streaky pork, fried tofu and chunks of huoshao.

In summer, the braised spiced beef and vegetable salad filling is very popular. Jingjie, a kind of mint with a spiky flavor and aroma, is often added to balance the richness of the protein.

Huoshao is a popular breakfast dish and great to accompany soups or congee. You can also dip plain huoshao in savory soups. 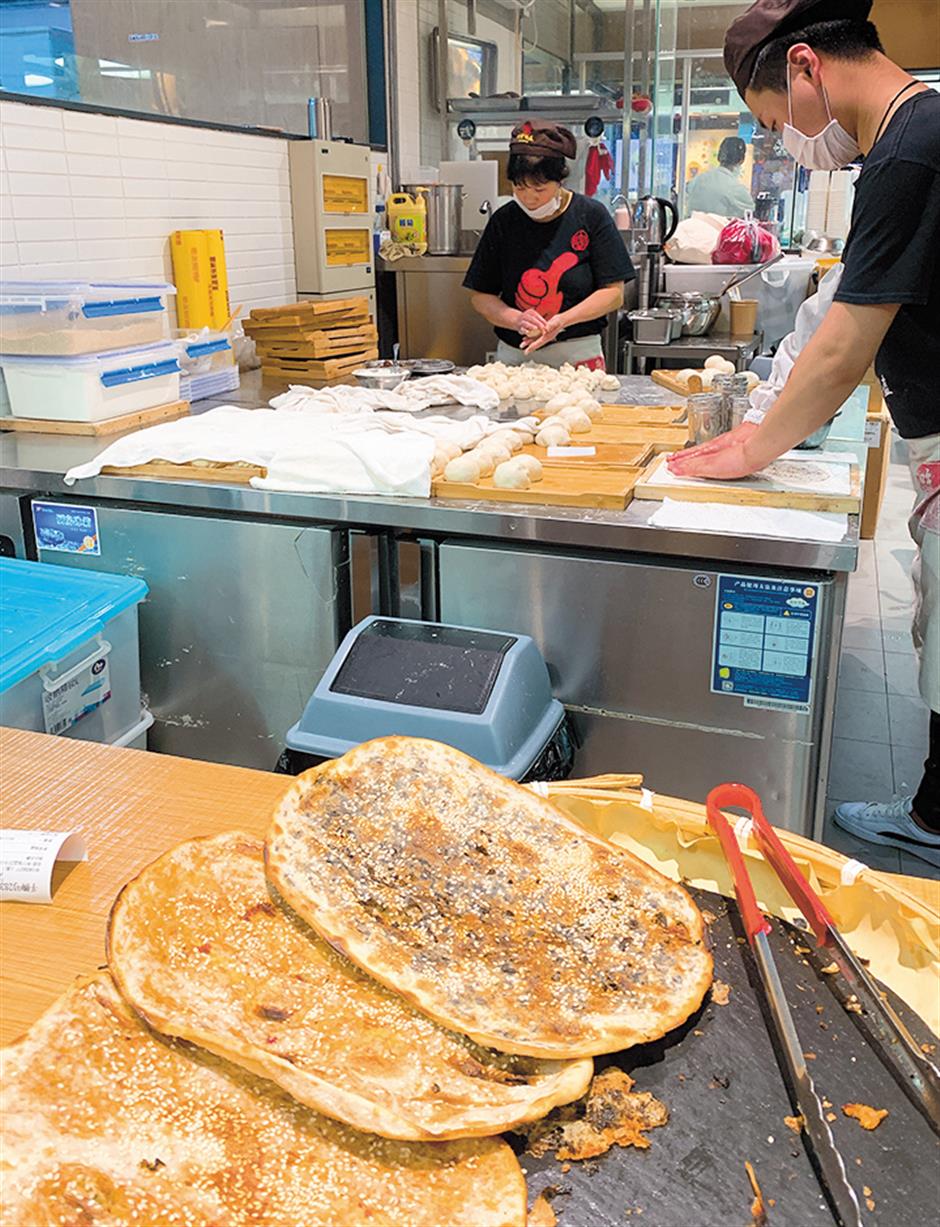 Besides the newly emerged roujiamo places, the thin, crispy guokui with fillings of meat, potherb or red bean paste is also spreading rapidly across Shanghai.

In China, the name guokui can refer to different foods. For example, the Shaanxi-style guokui is a large, round baked bread with a hard texture, and the Gansu-style is ultra-thick with a sponge-like interior.

In short, most baked bread can be called guokui.

The more popular kind of guokui from brands like A Gan (a Shanghai brand) that are now very popular in shopping malls around the city originated from the Gong’an guokui from the county of same name in Hubei Province. The dough, which is leavened, is rolled out super thin and fillings like minced meat, meigancai (preserved vegetables), red bean paste or brown sugar sauce are incorporated. A generous sprinkling of sesame seeds can greatly boost the flavor and texture.

The guokui are baked in large clay ovens by sticking them on the surface. It only takes a few minutes to cook and the treat is best enjoyed fresh and hot.

The Sichuan-style guokui is also a burger-like snack. It’s made with half-leavened dough that’s seasoned with star anise, peppercorns, ginger, salt and lard, then baked in the oven until the outer skin becomes crispy. The guokui is usually enjoyed with all kinds of fillings, and a local specialty is the spicy liangfen gfen (bean jelly noodles) stuffed inside guokui, which creates an interesting contrast of textures in one bite. 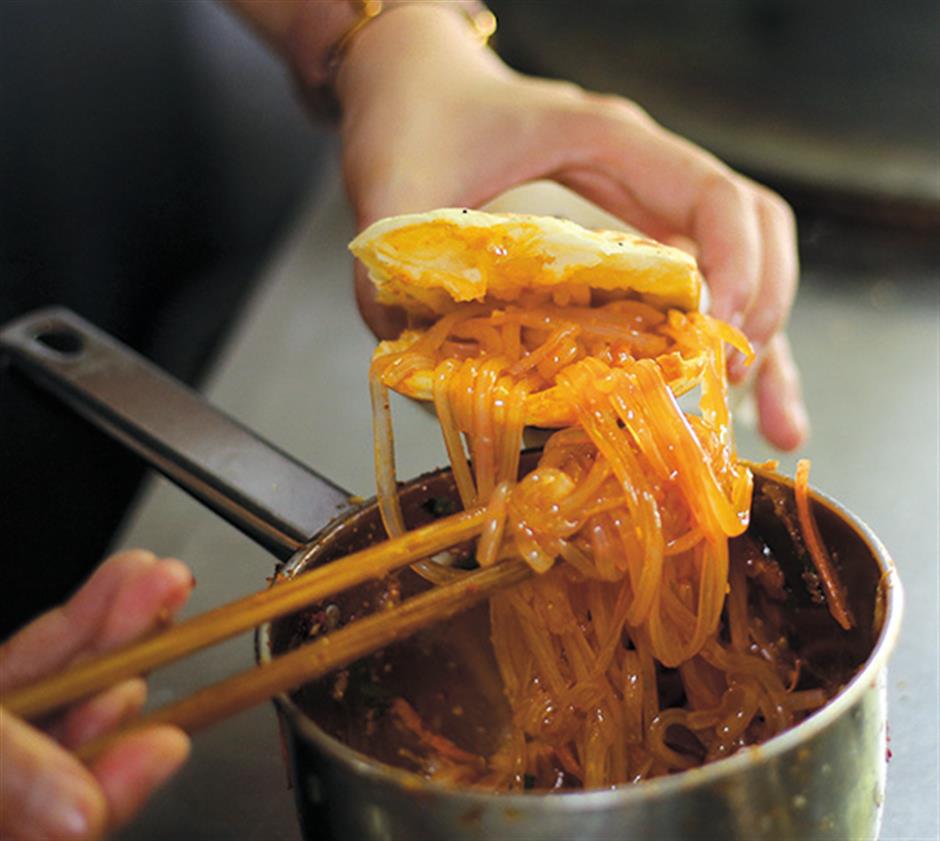 Much like the Mexican burritos, the Chinese-style involves a thin flour bing like a tortilla and various kinds of meat and vegetable fillings to create a complete meal.

A traditional Chinese burrito is called laomo, which has a 2,000-year history. It’s made by rolling out small pillows of unleavened dough into a super thin shape, then baked on a flat, iron pan known as aozi (鏊子) without any oil, it requires a bamboo stick to turn the laomo for even cooking. 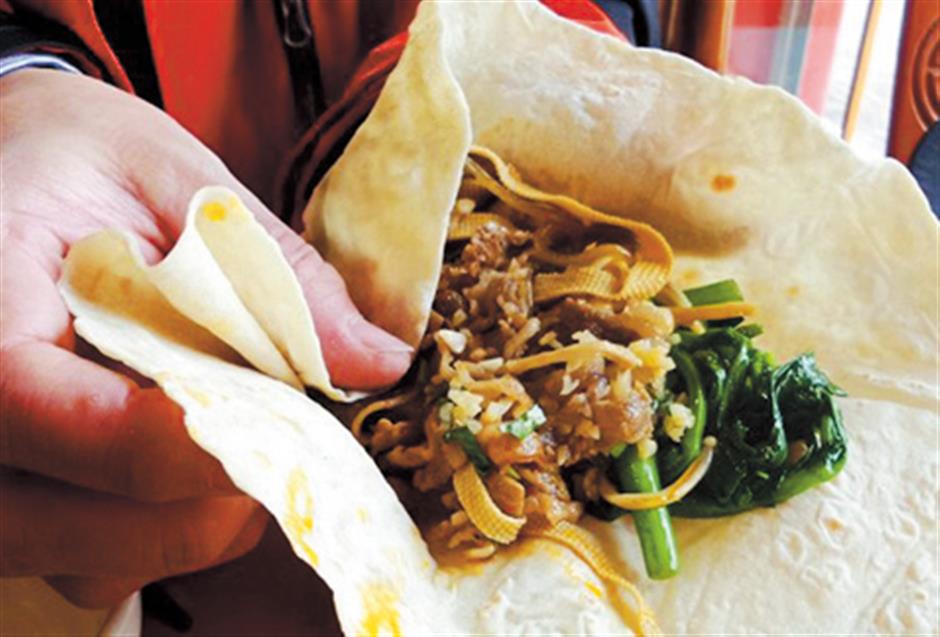 Laomo is very dry in texture, which makes it an easy food to travel with. It’s eaten with an array of stir-fry dishes, braised meats and sauces, classic combinations include vinegar-flavored potato shreds, braised pork, green pepper and egg stir-fry as well as stewed bean curd.

A meal of laomo is usually completed with a bowl of congee.