TRAVEL China lodges solemn representations with US over flights ban

China lodges solemn representations with US over flights ban 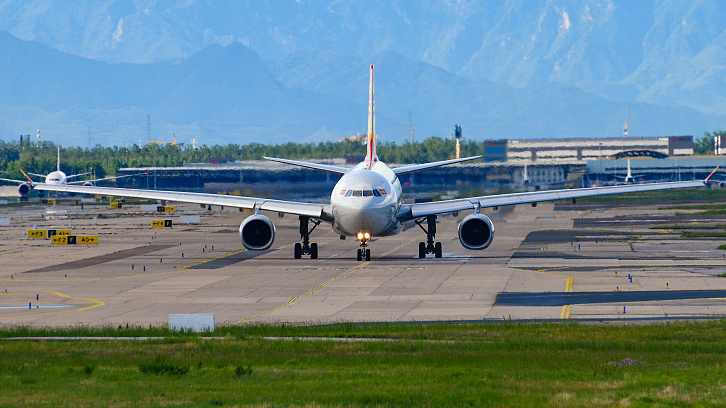 A jetliner is seen taxing on the runway at Beijing Capital International Airport. (Photo: VCG)

China's Foreign Ministry said on Thursday that the Chinese civil aviation regulator has lodged solemn representations with the US Transportation Department after the US side decided to suspend flights by Chinese passenger carriers.

The Civil Aviation Administration of China (CAAC) has been in close communication with the US on the arrangement of flights between the two countries, said Zhao Lijian, spokesperson for the ministry, at a regular briefing on Thursday.

"The CAAC is making solemn representations with the U.S. Transportation Department (USDOT)," noted Zhao, expressing the hope that the U.S. side would not create obstacles for both parties to solve the problem.

The Trump administration on Wednesday said it planned to block Chinese airlines from flying into or out of the U.S. starting June 16, with the time limit subjected to being moved up.

United Airlines said it looked forward to resuming passenger service between the United States and China "when the regulatory environment allows us to do so."

Earlier on Thursday, the CAAC responded to the application of many foreign airlines, including Lufthansa and Finnair, to resume international routes to China, saying it will allow more foreign carriers to operate flights into the country based on the premise that the risks related to COVID-19 are controllable.

Foreign airlines currently unable to operate routes to China can choose one city in the country from which to run international flights once per week starting June 8, according to the statement.

Meanwhile, the Chinese aviation regulator said in its latest statement that flight incentives and "circuit-breaker" measures will be also implemented from June 8.

If an airline reports no positive nucleic acid coronavirus test results among incoming passengers for three consecutive weeks on the same route, the carrier may fly two weekly passenger flights.

For airlines on the same route, if up to five of incoming passengers test positive, their operation on the route would be suspended for a week. In case ten passengers test positive, the operation on the route would be held for four weeks. Once the "circuit-breaker" period ends, the related airline could resume its normal weekly passenger flights, said the statement.

In a bid to curb imported coronavirus cases, the CAAC said in late March that from March 29, all Chinese airlines are allowed to operate only one flight to a country per week, while foreign aviation companies have kept only one air route to China with no more than one flight every week for each of their air routes to China.

Carriers could fly no more than the number of flights they were flying on March 12, meaning that foreign airlines that had suspended the operation of air routes to China before that day, like American Airlines, Delta Air Lines and United Airlines, are ineligible for even one weekly flight and need to reapply to resume flights.

On January 31, the U.S. government barred most non-U.S. citizens who had been in China within the previous 14 days from entering the country due to the coronavirus outbreak but did not impose any restrictions on Chinese flights.

Last month, USDOT briefly delayed a few Chinese charter flights under the pretext of "not complying with notice requirements," and then started to ask Chinese air carriers to report flight schedules to evaluate if they are "contrary to applicable law or adversely affect the public interest."