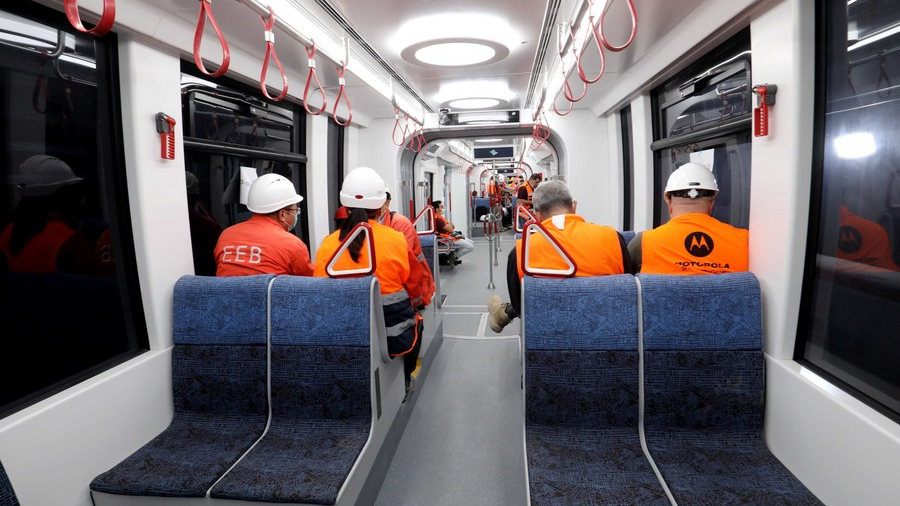 The test drive was carried out with an electric train developed and manufactured by the Chinese company CRRC Changchun Railway Vehicles Co., which won an Israeli government tender for supplying the carriages.

The first carriages arrived in Israel in November 2019, after the CRRC successfully tested the model in China's northeastern city of Changchun earlier in April.

The test drive in Israel was made along the Red Line, the first of the three lines in the Tel Aviv light rail project. The Red Line is scheduled to start operating in November 2022.

This line will pass through five cities in the most congested areas of Tel Aviv Metropolitan Area in central Israel.

The length of the line is 24 km, 11 km of which is in tunnels. It includes 34 stations along its route, with 24 above ground and 10 underground.

The frequency of travel planned on the line will be a train in every 3.5 minutes, and each train is expected to carry up to 500 passengers.

The construction of the tunnels, stations and tracks on this line, as well as the electrical and communication systems, were carried out by China Civil Engineering Construction Corporation (CCECC) and its Chinese partnership CRTG-EEB, together with the Israeli companies Solel Boneh and Danya Cebus.