SHANGHAI, March 23 (Xinhua) -- Xu Zhengna from Shanghai was rather busy rescheduling her upcoming May Day holiday plan after the State Council announced Friday that this year's holiday would be stretched to four consecutive days from May 1 to May 4. 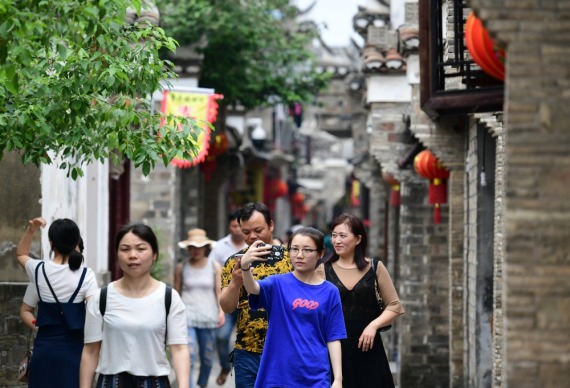 Xu is planning a family trip to Xi'an, China's ancient capital in the northwestern province of Shaanxi, and she believes early booking is necessary since more people are eager to travel during the short holiday.

According to the State Council announcement, this year's May Day holiday will be upgraded from a single day off to a four-day holiday, with April 28 and May 5 as working days.

Within an hour after the announcement, trip searches and bookings surged about 50 percent on Ctrip's mobile app, the country's biggest online travel agency.

"Searching for flight tickets and hotels at a good price is a race against time," said Xu. She saw a one-way ticket from Shanghai to Xi'an rise by over 100 percent.

Ctrip also estimated that about 150 million trips would be made during the period, with notable growth in domestic and regional trips.

Thailand, Japan and Indonesia are expected to be popular overseas travel destinations during the holiday, while Chongqing, Hangzhou and Shanghai among the hottest domestic tourism cities.

Over the years, there has been a growing tourism demand during the country's two to three day holidays such as the May Day holiday, said Dai Bin, head of the China Tourism Academy, adding that people's spending on travel has also grown significantly.

He Jianmin, with Shanghai University of Finance and Economics, said the holiday extension enables people to better arrange their vacations, though the total number of annual holidays remains unchanged.

Xu and her husband are avid travelers and spend about 60,000 yuan, about one-fifth of their annual income, on traveling each year, always going on trips during holidays and weekends.

"We like destinations that boast nice sceneries and easy transportation. But more importantly, we need enough time to travel," Xu said.

People's growing travel interests will give a boost to catering, accommodation, entertainment and other tourism-related industries and will help diversify travel products and services, said Peng Liang, a researcher with Ctrip.