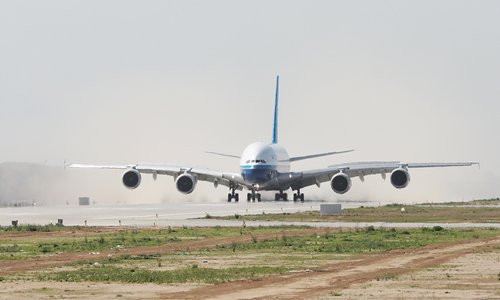 The Chinese government on Wednesday took a rare measure that offers direct cash incentives for global and domestic airlines that operate international flights in and out of China, in an apparent bid to resume global travel that has been halted due to the coronavirus outbreak.

Under the new policy, airlines that operate international flights can apply for a cash incentive of 0.0176 yuan ($0.0025) per seat per kilometer for shared routes, and 0.0528 yuan for exclusive routes, according to a statement of the Ministry of Finance (MOF).

Both domestic and foreign airlines are eligible for the incentives, the MOF said. The program does not apply to flights to the two special administration regions of Hong Kong and Macao, as well as Taiwan.

"This provides airlines with huge support, in terms of lowering costs," Qi Qi, an independent market watcher, told the Global Times on Wednesday, noting that the incentive could "basically" cover costs for flights on exclusive routes. "It can be understood that [the Chinese government] is paying to keep international routes open."

Many airlines suspended international flights in and out of China's mainland cities after the government launched a nationwide campaign to contain the coronavirus outbreak. But as the anti-epidemic efforts have yielded promising signs in areas outside of Hubei, the epicenter of the outbreak, Chinese officials are focusing on resuming operations.

Wednesday's move was "a proactive response to the impact of the [epidemic] on the civil aviation industry and aimed at encouraging continuing international flights," the MOF said in the statement.

Lin Zhijie, an independent analyst, said that such special subsidies for airlines in response to a major event are rare. "It looks like that this policy measure has great intensity," Lin told the Global Times on Wednesday.

He said that for a flight with 300 seats and a travel distance of 10,000 kilometers, which is common among flights between China and the US or Europe, airlines can get as much as 300,000 yuan in cash incentives from the Chinese government for exclusive routes or about 100,000 yuan for shared routes in operating costs.

The program is valid between January 23 and June 30 this year, the ministry said.