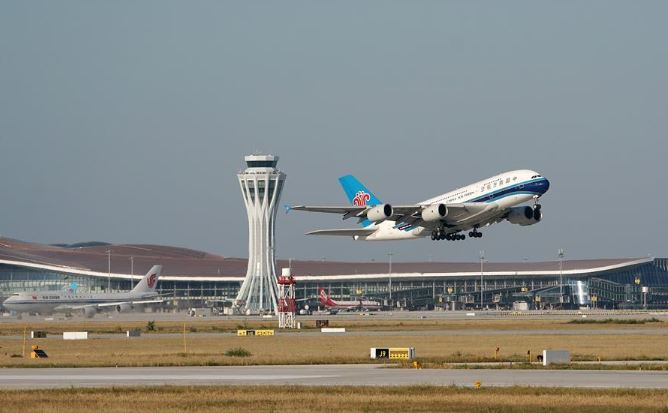 China Southern Airlines flight CZ3001 takes off at the Daxing International Airport in Beijing, capital of China, September 25, 2019. Beijing's brand new Daxing International Airport opened to flights as a China Southern Airlines flight took off on Wednesday afternoon. Located 46 km south to downtown Beijing, the new aviation hub is shaped like a phoenix spreading its wings. Its passenger throughput and cargo throughput are expected to reach 72 million and 2 million tonnes respectively by 2025, with 620,000 takeoffs and landings. (Photo: Xinhua)

During the week-long holiday, 12.8 million passenger trips were made, up 5.1 percent year on year, according to the Civil Aviation Administration of China (CAAC).

Return trips from tourism destinations such as Xishuangbanna, Sanya, Lijiang, Guilin, Wuyi Mountain and Jinggang Mountains surged in the last two days of the holiday. A return peak appeared on Oct. 7, with 1.9 million passenger trips made.