Booming midweek business at resorts in Beijing's Olympic co-host city indicates China's ski industry is making a strong recovery from its COVID-19 downturn earlier in the year, bolstering investor confidence that the future is bright beyond 2022. 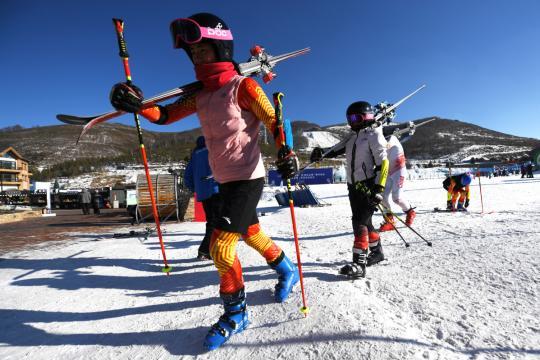 Despite a deep winter chill and bitter winds, skiers were queueing up to check in at Thaiwoo Ski Resort in Zhangjiakou, Hebei province on Tuesday morning－a bustling scene one might be more inclined to expect on a weekend or holiday.

"It's great to see so many people enjoying themselves at Thaiwoo today, which used to be the bleakest day for business during the week. It's a great sign (of recovery)," Zhou Wenqian, president of Thaiwoo, told China Daily on Tuesday from the sideline of an ice and snow carnival at the resort.

"The increase in visitor flows is helping a lot with our weekday revenues. It's something we expected though with the diversified options in accommodation, catering services and off-snow entertainment at our resort, as well as the start of operations of the high-speed rail link to Beijing."

Currently receiving twice the number of visitors on weekdays compared to the same period of the 2018-19 season, Thaiwoo has seen its daily revenue double to around 1.6 million yuan ($244,000), from ski ticket sales, equipment rental, and consumption in hotels and restaurants, according to Zhou.

"We are yet to enter the New Year holiday season, which means greater potential of growth is still ahead of us," she said.

As Beijing's co-host for most of the snow events at the 2022 Winter Olympics, Chongli district in Zhangjiakou, where seven major resorts including Thaiwoo are located, has witnessed a significant increase in visitors and investment from the hospitality sector since the bullet-train service began operation at the end of 2019.

The COVID-19 outbreak, however, hit the industry midway through the 2019-20 winter season, to cancel out expected gains from the new train service and ideal weather conditions.

Around 40 percent of businesses operating in China's winter sports sector saw their revenues more than halved last winter, with properties shut down and consumers grounded, according to an industry analysis published by the Beijing Olympic City Development Association in April.

With the epidemic well under control across China, the rebound in outdoor sports participation and domestic tourism has seen ski resorts in the north of the country become extremely popular with the holiday season approaching.

Just across the ridge from Thaiwoo, Genting Resort Secret Garden, which will host freestyle skiing and snowboarding at the 2022 Games, has received nearly 100,000 visits since opening its slopes and cable lifts on Nov 7, doubling the number of the same period the previous season before the coronavirus-enforced shutdown.

To cater to the anticipated surge, the resort has opened new cafes and restaurants, rebuilt roads, upgraded parking lots with charging facilities, and expanded its accommodation capacity with a new hotel and apartments.

Despite the cancellation of the 2021 FIS Freestyle Ski, Snowboard and Freeski World Championships at Genting, this winter season still promises plenty of excitement, according to the resort's senior vice-president, Shu Wen.

"I think the pandemic's impact won't hurt the industry too much in the long run," he said. "We are very positive that the demand of urban consumers for mountain getaways, especially skiing, will keep growing thanks to the promotion around the Winter Olympics and infrastructure upgrades."

The world championships, originally scheduled for Genting from Feb 18-28, were among 15 2022 Winter Olympic test events canceled or rescheduled due to the pandemic.

Still, Olympic preparation at the resort remains on track, with Genting having tested all six of its ready-made courses－including halfpipe and slopestyle－for the Games by hosting World Cup meets since 2017.

After pulling through the "coldest" winter amid the pandemic, resort operators have reflected on the lessons learned from the crisis, highlighting the need to explore new revenue streams and develop products for year-round operation.

Offering the likes of mountain biking, hiking and river rafting during the offseason is common practice at established destinations in Europe and North America, however it's still relatively uncharted territory for the Chinese ski industry.