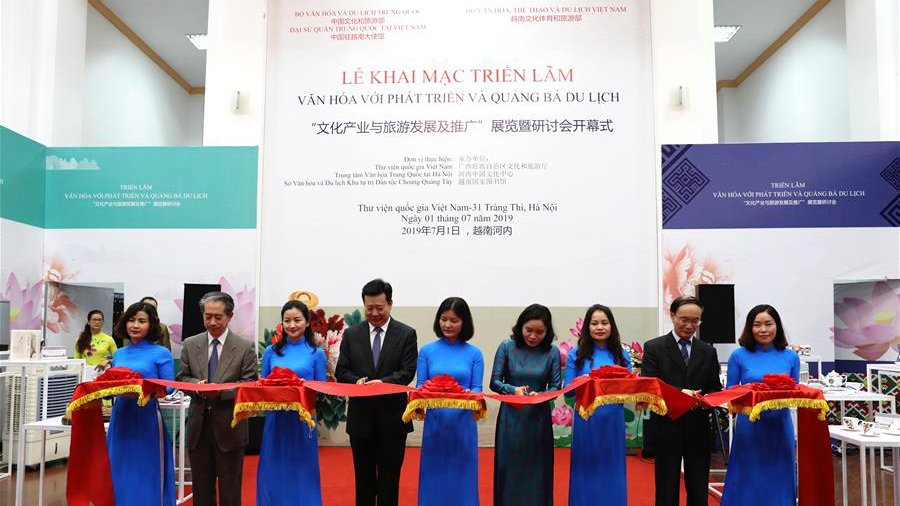 Guests cut the ribbon at the opening ceremony of an exhibition and a seminar on cultural industry and tourism promotion in Hanoi, capital of Vietnam, July 1, 2019. (Photo: Xinhua)

"If these beautiful products are for sale, I will buy them immediately," a Vietnamese young man told Xinhua on Monday, pointing his hand to a USB drive in the form of a Guangxi bronze drum and then a smartphone cover with images of a dragon and a phoenix.

Standing next to him, a Vietnamese middle-aged woman was gazing at semi-precious stones in different shapes and colors which were twinkling inside. She touched a crystal stone, which looks like quartz, overturned it and exclaimed with surprise: "There is a battery-powered small lamp inside it."

"In recent years, culture and tourism cooperation between China and Vietnam has been broadened and deepened… China has remained Vietnam's biggest source of foreign visitors for over 10 years," Li Qun, Chinese vice minister of culture and tourism, said at opening ceremony of the exhibition and the seminar on Monday.

The two sides have engaged in comprehensive exchanges and cooperation in such spheres as cultural industry, human resource training, cultural heritage and tourism, creating new impetus for the comprehensive strategic cooperative partnership between the two countries, he stated, noting that the exhibition and seminar are part of the China Tourism and Culture Week held around the world.

The Vietnam National Administration of Tourism has signed memorandums of understanding on tourism cooperation with many Chinese cities and provinces, including Sichuan, Chengdu and Zhejiang, Trinh Thi Thuy, Vietnamese vice minister of culture, sports and tourism, said at the opening ceremony of the seminar and the exhibition which is displaying over 200 cultural and creative products made by Chinese museums.

The organization of the exhibition and the seminar is a manifestation of fine culture exchanges and cooperation between the two countries, she said.

The exhibition consists of four sections themed ethnic culture, municipal culture, historical culture and landscape culture. The cultural and creative products on display, all eye-catching and useful, have been designed and created by five Chinese museums in south China's Guangxi Zhuang Autonomous Region.

The Vietnamese young man, Hoang Hai, a student at the Hanoi University of Culture, said that only when attending this exhibition did he realize that ancient bronze drums in Vietnam and Guangxi look fairly alike and that indicates similarity between Vietnamese and Chinese cultures.

"And what I admire more is that employees of museums in Guangxi have creatively used patterns of ancient bronze drums such as flying birds and the sun to make impressive modern products including USB drives and tape measures," Hai said.

The middle-aged woman, who identified herself as a loyal fan of the National Library of Vietnam, said through objects on display at the exhibition she understands that landscapes and culture of Guangxi in particular and China in general are very diversified and beautiful.

"I'm a bookworm, but this exhibition has inspired me to make arrangements for my first trip to China in the near future to see all the beauties there with my own eyes," she smiled.