TRAVEL China’s domestic tourism picks up during the Qingming Festival

China’s domestic tourism picks up during the Qingming Festival 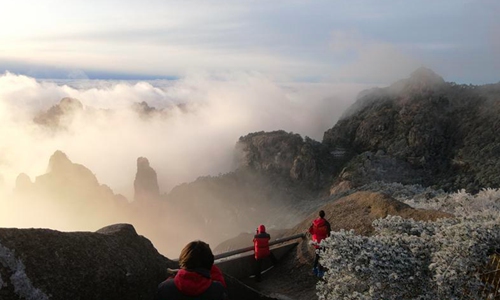 Multiple tourist attractions in China welcomed massive crowds during the three-day Qingming Festival holiday which began on Saturday as the tourism industry picked up. However, experts warned there is a possibility of coronavirus transmission and called for stronger regulation of scenic spots.

Huangshan Mountain, a 5-A tourist attraction in Eastern China's Anhui Province received a huge flow of tourists on Sunday after it exempted its 190 yuan ($26.7) entrance fee to residents of the province to promote tourism.

The mass influx forced the scenic area to issue three notices to advise tourists to change their travel routes due to limited reception capacity in the scenic area.

The office issued the first notice at 6：24 am saying that the parking lot at the southern gate of the scenic spot was close to full capacity. This was followed by a second notice at 7: 48 am which said that it had stopped receiving tourists as the number of people entering the scenic spot reached the daily limit of 20,000. It issued a third notice at 10:42 am, suggesting visitors to adjust their travel plans to another day.

From the video uploaded by netizens, there was almost no gap between tourists when they were climbing the mountain. Some even took off their masks.

The overly crowded scenic spot made some internet users anxious about the possibilities of infection transmission.

"The COVID-19 pandemic has only just stabilized in China, do you want it to break out again?" commented an internet user on the Twitter-like social media site Sina Weibo.

Others blamed the free entrance policy which caused people to flock into the scenic spot.

"The free entrance policy should not be encouraged as the pandemic is not over yet," said another.

The free entrance policy comes amid a two-week tourism promotion activity in Anhui Province. From April 1 to 14, residents in the province can visit 31 scenic spots in Huangshan city without any entrance fee.

A total of 55 scenic spots in Hangzhou, Eastern China's Zhejiang Province were also opened for free with reservation to control the daily reception capacity of under 50 percent of the maximum daily carrying capacity.

"Of course the entrance fee policy is good. Almost everywhere is now," Wen Fang, a tourist who took two days' work leave to go to Zhejiang Province during the holiday told the Global Times on Sunday.

Starting from the end of March some provinces and cities have rolled out favorable policies with free tours and discounts to boost tourism, Xu Xiaolei, marketing manager at China's CYTS Tours Holding Co told the Global Times on Sunday.

"More scenic spots in China are opening up. Excursions and travel within the province are recovering," Xu said.

However, he noted that the opening up of tourist attractions must be cautious with enough precautionary measures being taken into consideration.

"Tourists must have self-protective awareness and the scenic spots must be responsible for regulating and arranging the tourists, otherwise it could still be risky," he said.

In the past week, the number of people traveling on group tours has increased by more than 366% and the ticket sales of scenic spots rose 114% month on month, according to a report issued by Chinese online travel service provider Ctrip.

Data shows that up until now, the number of bookings of near-distance tourism packages in April is three times of that in March, mainly during the Qingming Festival and on weekends.

According to the report, the recovery of the tourism industry is accelerating and a new travel peak is expected on the coming Labor Day holiday in May.