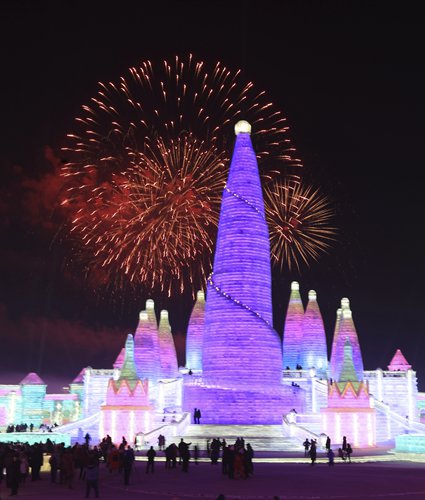 Heedless of snow, ice and frigid temperatures, tourists flock to Harbin in winter. Located in the northeastern most part of China where temperatures can drop to around minus 38 C, Harbin was a small fishing village on the Songhua River in Heilongjiang Province that grew into an international city in the late 19th century. Its transformation was spurred by the construction of the Chinese Eastern Railway that linked the Trans-Siberian Railway to the Russian port of Vladivostok. During the early decades of the 20th century, Harbin's population was predominantly made up of Russian immigrants. By the mid-1960s, their descendants had either repatriated back to the Soviet Union or immigrated to Australia and South America. The city is still an important center for Chinese-Russian trade however, due to the growing business and economic ties between the two countries resulting from China's Belt and Road initiative.Few vestiges from that time exist in modern-day Harbin, a city with a population of close to 6 million people, but the Neo-Byzantine St. Sophia Orthodox Cathedral with its towering green domes is a notable exception. The former church dominates Harbin's Architecture Square and now houses the city's Municipal Architecture and Art Museum. Authentic, delicious Russian food is also found in colorful restaurants that dot the city, but that is due to the current influx of Russians into the region. Fun-filled wintry festivalIt is possible to see the Aurora Borealis in China in the village of Mohe further north in Heilongjiang Province on the Russia border, but Harbin offers a man-made spectacular of ice and color whose enjoyment is not subject to the vagaries of nature. Each year from early January until late February, fantastic ice and snow sculptures are erected throughout the city as part of the annual Harbin International Ice and Snow Sculpture Festival. Even before the festival's official opening, which this year was on January 5, visitors are greeted by wintery construction sites throughout the city. Steel literally meets ice as giant ice structures are built of blocks of frozen water on metal frames.Judging from the crowds over the 2017 New Year's holiday weekend there was no need to wait for the official opening of the festival. Arriving in the late afternoon on New Year's Day, the Ice and Snow World, located on the northern banks of the Songhua was full of people having more fun than one might think possible in sub-zero temperatures. It is not only the fabulous, brilliantly illuminated ice lanterns, which ranged from entire cityscapes to temples, that generated the excitement, but also the many activities on hand. Sleigh rides drawn by reindeer and ice skating were popular, but the longest queues were for the chance to slide down the runs built into the towering ice lanterns on little red, plastic sleds. People stood in long queues for the thrill and then got back in line to do it all over again.For those who needed to get out of the cold or dine, there were restaurants offering both local and global cuisine. Cold is serious factor though, and as Harbin's public transportation does not yet reach the park, it is best to either book a return taxi or a ride-sharing service. Drivers know the drill, so language is not an issue. They not only give advice as to proper attire, but also help in purchasing tickets without a word being spoken. Ask to be taken to Zhaolin Park en route to the Ice and Snow World, where the ice lanterns are smaller but just as magical in a peaceful setting. The theme for the 2018 festival is 'Ice Snow Blooming Garden, Fantastic World,' which should inspire Harbin's designers and sculptors to conjure up the beauties of nature in ice and light. The festival runs through the end of February and draws huge crowds over Chinese New Year, so it is best to get there earlier if you can.

Spirit of the north On the same side of the river is one of the architectural wonders of modern China, the Harbin Grand Theatre, conceived to be at one with "the force and spirit of the northern city's untamed wilderness and frigid climate." Designed by the Beijing-based firm MAD Architects, its exterior is a series of sinuous, undulating white shapes that in winter appear to emerge out of the frozen, snow-covered terrain. The complex's interior spaces are seemingly carved out of a massive Manchurian ash tree, the warmth of wood contrasting with the stark white of the walls, just as in nature.A daytime visit affords the opportunity to explore the exterior of the building and climb to the top to survey both its overall design, as well as its relationship to the surrounding landscape. From its highest points there are views of the frozen Songhua and the city's skyline across an expanse of ice and snow. The knowledge and understanding of nature, let alone the imagination and creativity that went into creating this remarkable structure are simply awe inspiring. Performing spaces have to be experienced when there is something happening on stage and with an audience filling the seats. The theater plays host to orchestral, dance and operatic performances by Chinese and international artists with tickets easily obtainable. In a country with so many astonishing sights - ancient, modern and natural - the Harbin Grand Theatre in winter is one of the most serene and wonderful of them all. It also has the benefit of not melting away come spring, as do the ice lanterns.As with the Snow and Ice World, the Harbin Cultural Island, where the Harbin Grand Theatre is located is not yet well served by public transportation. After a performance has let out the crowd quickly dissipates and there are no taxi stands. The nights in Harbin, which sits just 2,317 kilometers south of the Arctic Circle are dark and bitterly cold, so it is best to plan ahead for the return trip to the other side of the river where most hotels are located. Majesty of a Siberian tigerThe Siberian Tiger Park, which is home to over 500 Siberian tigers, white tigers, lions, leopards, black pumas and Bengali tigers, is also nearby. It might not be for the squeamish, but then little in nature is. The majestic animals cats roam free in a safe, natural environment, which is hardly possible in the wild anywhere in the modern world. These cats are truly magnificent. Then again, that can be said about almost everything in Harbin during the winter, including the weather.