Mount Fanjingshan, in Southwest China's Guizhou province, has been required to limit visitor numbers, among other measures to protect China's newest entry on the UNESCO World Heritage List. 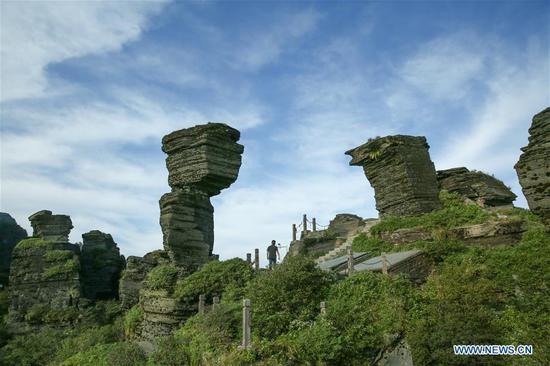 Photo taken on Aug. 29, 2016 shows the scenery of Mount Fanjingshan in Tongren City, southwest China's Guizhou Province. Mount Fanjingshan was inscribed on the World Heritage List on July 2, 2018 at the 42nd World Heritage Committee meeting in Bahrain. The ecosystem of Fanjingshan has preserved large numbers of ancient relict plants, rare and endangered creatures, as well as unique species. (Photo: Xinhua)

According to the 2018-2030 overall plan approved by the provincial government, the mountain has been limited to no more than 23,480 visitors per day.

Logging, quarrying, and construction projects, other than for the purpose of environmental protection, are also banned in the region.