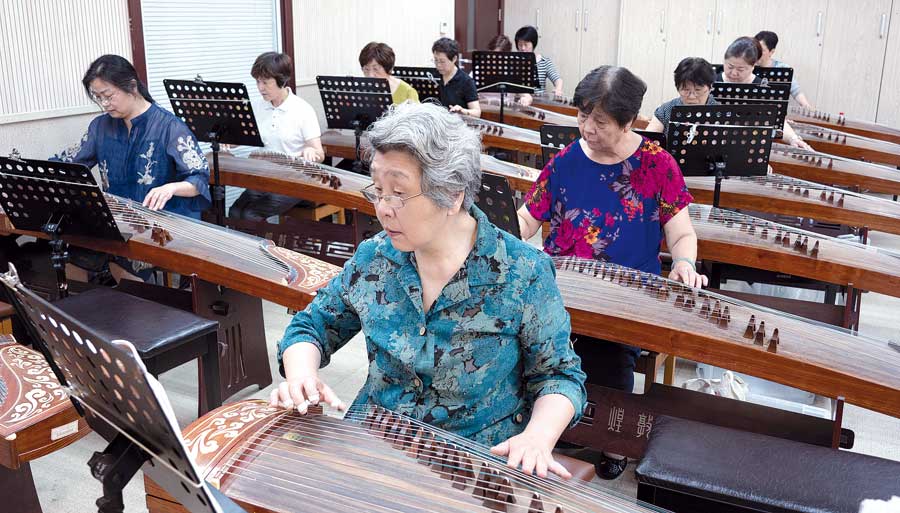 Students learn to play traditional Chinese musical instruments at a school for the elderly on Nantangbang Road in Shanghai.  PHOTOS BY GAO ERQIANG / CHINA DAILY

Bored with life after retirement, a growing number of people are enrolling in universities for the elderly to meet new friends and pick up new skills

While some of her peers spend most of their time taking care of their grandchildren and watching television, 63-year-old Wang Huizhen has opted to revisit something that she left behind decades ago — study.

Since enrolling in the Shanghai University for the Elderly in 2011, Wang has been taking four classes every week with subjects including foreign languages, dancing and singing. She is the monitor in her class and has raked in 72 credits so far.

The primary reason behind her decision to study again, said Wang, was the mundane life she had after retirement.

"All I did was play cards and watch television. Life was boring. Going to college again has made my retirement life more colorful and meaningful," she said.

"I feel that my passion for life has become stronger since I enrolled in the university. In fact, this passion is so strong that my friends have even said that I've turned into a completely different person who is always happy."

Universities for senior citizens are nothing new. The rapid increase in China's elderly population and the growing demands for a better quality of life have resulted in a spike in the number of institutes such as the Shanghai University for the Elderly. According to a Chinese association of educators for senior citizens, there are currently more than 70,000 elderly universities in China with over 8 million enrolled students. 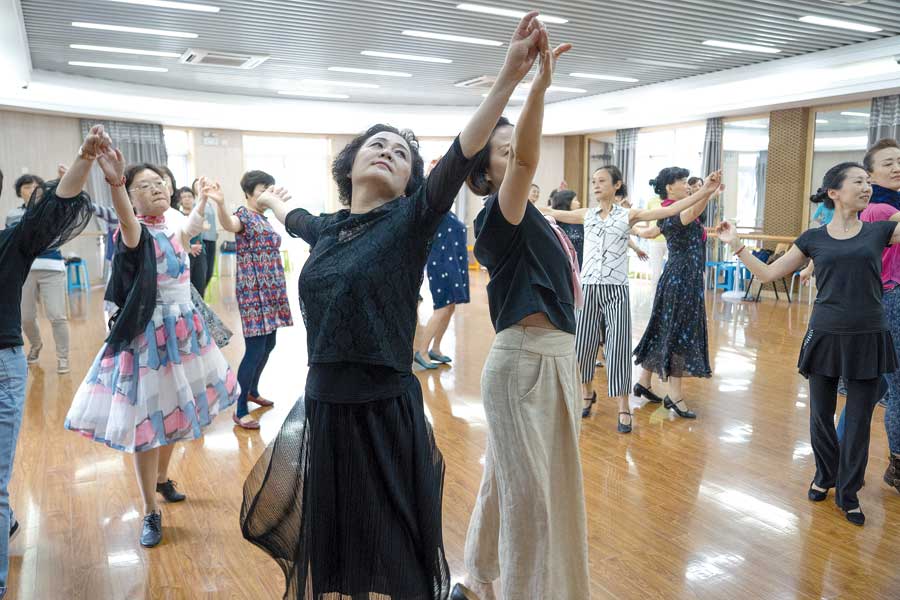 Dancing is one of the most popular courses among the elderly students.

In fact, these universities are proving to be so popular that people often face problems enrolling in one.

"These universities are so popular that many courses are booked within seconds of its release online," Wang said. "I had to stay awake till midnight when the online enrollment began just so I could get a place."

According to a recent Xinhua news report, only one out of 16 people manage to enroll in a popular course in Hangzhou universities for the elderly. Over in Guangzhou in Guangdong province, the 35 universities located there are filled to capacity every year.

Shanghai is the country's first city to be classified as an aging society. According to the Shanghai municipal government, 4.84 million people aged 60 or above account for 33.2 percent of the registered population. Despite being one of the leading Chinese cities in terms of offering education for seniors citizens, Shanghai's 292 elderly universities and 5,447 teaching schools only have space for 783,000 elderly, meaning only one in six get a chance to attend such colleges.

"More and more people are applying for the elderly universities. The annual growth rate of applicants is around 10 percent," said Xiong Fangjie, the vice chancellor of the Shanghai University for the Elderly, the largest elderly institution in the city. The college has more than 18,000 students on its main campus and another 60,000 students across its 24 branches.

According to Xiong, the school accepts women aged over 50 and men over 60, with no limitation on their registered permanent residences. About 80 percent of the students have at least a high school education. Students usually spend no more than eight years before graduating.

Established in 1985, the Shanghai University for the Elderly now has 10 departments, including calligraphy and painting, foreign languages, piano, computers and literature. It offers 40 majors, 179 courses, and 460 classes for students.

"There are two options for the seniors — applying for the associate degree that is equivalent to a college degree, or applying for an amateur major that will allow them to graduate as honors students. Most people choose the amateur one," said Xiong.

The amateur major requires students to complete 12 core courses, 11 elective courses, and one social practice course. Each course is worth four credits, and a student will be able to graduate with 96 credits.

While options for the amateur majors are plenty, the associate degree programs comprise only four majors — piano, vocal music, sports and health care, and photography and camera technology — and have stricter requirements for completion.

Zhang Yanqing, 72, is among the students in the amateur major course. She said that she chose this over the associate degree as it offers her a chance to learn more.

"A degree is not necessary for someone of my age. The most important thing for me is to pick up knowledge from different areas," she said.

"I knew little about cooking when I was young, but now I can cook for my husband delicious dim sum and dessert. My needlework has also improved. I can make pants and dresses for myself."

Mao Jiemin, a calligraphy teacher who has been teaching at the Shanghai University for the Elderly since 1988, said that he prefers teaching retirees instead of young students because the former are so much more eager to learn.

"The elderly are very different from the young students. They are thirsty for new knowledge and skills," Mao said.

As schools for retirees are run as charitable institutions and are mostly government-funded, the average tuition fee costs only about 200 yuan ($31) per semester. It would cost an elderly about 5,000 yuan to complete a course and graduate. But for many of the students, graduating is hardly on their minds.

"Many students want to apply for more courses because the school is like the second home to them," Xiong explained.

"The university is a good platform for elderly people to socialize with one another. Many of them are alone at home because their family members are at work during the day."

In fact, some elderly students even resort to enrolling in another university after they graduate just so they could continue to meet new people, said Xiong.

This cycle of learning has exacerbated the imbalance in demand and supply.

Lin Yuanhe, vice chairman of the China Association of the Universities for the Aged, said that the situation is expected to improve as more learning centers for seniors have been included in China's development plan which aims to have at least one university for the elderly in every county by 2020.