Chinese tourists born between the mid-90s and the early '00s are still enthusiastic about travel but post changing travel preferences as the COVID-19 epidemic risks wane in China, a report shows. 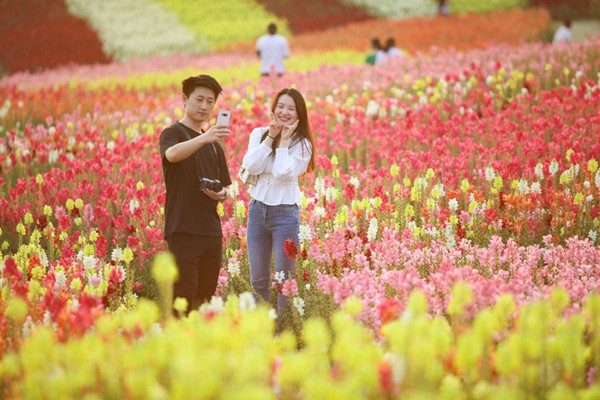 Tourists take a selfie among blooming flowers at a scenic spot in Suining, Southwest China's Sichuan province, May 1, 2020. (Photo: Xinhua)

Generation Z-ers in China show growing interest in domestic travel and a shrinking willingness to travel abroad, according to a report by Chinese travel service and social-networking platform Mafengwo, which surveyed over 2,500 young respondents.

While their travel budget has not been much squeezed by the epidemic, over 60 percent of respondents said they planned to spend more on safe and sanitary dining and accommodation due to health concerns, the report said.

The epidemic has further strengthened young tourists' habit of learning about and sharing tourism experiences on emerging social-media platforms like livestreaming sites.

East China's Shanghai and west China's Chengdu, Xi'an and Chongqing are among the most popular domestic travel destinations for Generation Z-ers, the report said.