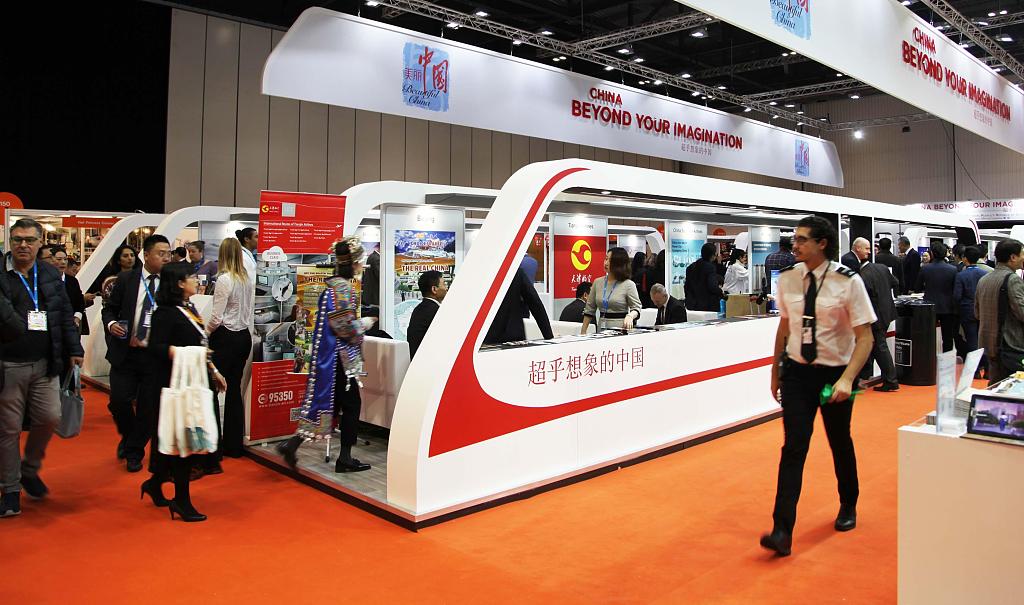 LONDON, Nov. 4 (Xinhua) -- Some 40 exhibitors with about 120 representatives from China showcase a variety of China's tourism products at the 2019 World Travel Market (WTM) London, which kicked off here on Monday.

China pavilion, themed "China Beyond Your Imagination," features two high-speed train compartments. Chinese representatives were all aboard the "train" to promote tourism products in the three-day trade fair.

Federico Grimaccia, founder and director of a new start-up online travel agency RuntoFly, told Xinhua the well-designed China pavilion caught his eyes as soon as he arrived at the exhibition center and he decided to visit the China stand as his first stop.

"I thought to put some flights to China in our platform ... We think it could be a good add on to our offering," he said.

At the opening ceremony of the China pavilion, Chinese Ambassador to Britain Liu Xiaoming said that in the past 70 years the cultural and travel industry in China has achieved much progress, turning the country into a major player in global tourism.

With 168 flights between China and Britian per week and more than 4,000 mutual visits every day, travelling helps build a bridge for exchanges and mutual learning between the Chinese and Western civilizations, he noted.

The annual WTM London is a leading global event for the travel industry, attracting around 5,000 exhibitors from 182 countries and regions and more than 51,000 participants, according to its official website.

Jonathan Hull, representative from WTM London, attended the opening ceremony of the China pavilion, saying that "China's inbound tourism market will be a major part of the growth in global tourism."

"We look forward to working with you as you continue to develop and grow over the next 40 years. We will enjoy working together on this next chapter in both histories," Hull said.