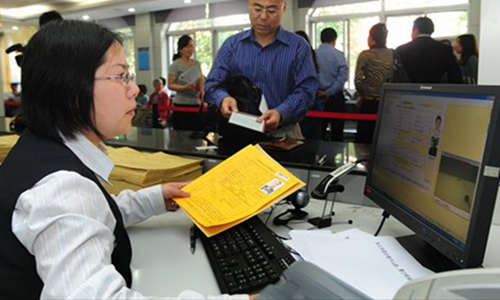 People line up at the Exit-Entry Administration Department to apply for their passports. (Photos: Global Times)

The report that China is suspending applications for private passports recently circulating on social media, and raising public concerns over further restrictions on outbound travel, has been dismissed by the exit and entry administration departments.

An online screenshot said China will suspend passport applications for personal reasons, except for studies, work and funerals. Some netizens even posted messages online claiming their local exit and entry administration bureaus  had refused to replace their passports.

Exit and entry administration departments, including those in Shanghai, Beijing and Tianjin, all dismissed the rumors.

When reached by the Global Times on Thursday, a staff member from the Beijing Exit and Entry Administration said private passport applications are operating normally, and people can make appointments online before coming to the administration office.

The Shanghai Exit and Entry Administration gave the same reply, but a staff member from the office told the Global Times that "because the epidemic has not yet ended, applications for passports are not encouraged."

Asked if applications for passports could be declined, the staff member said there is no official ban on passport applications, but the officers at the counter will decide the result in accordance with applicants' personal circumstances.

The Shanghai-based The Paper confirmed at an administration office in Shanghai that applicants cannot apply for passports for the purpose of "tourism."

Officers at the Shanghai Jing'an district exit and entry administration told the reporter that if people urgently need to apply for a passport, they should not choose "tourism" as their purpose in the application form.

Unless there is an urgent need to go abroad in the near future, or a valid visa is attached to an old passport and the country requires a replacement of the passport, under normal circumstances, citizens are not encouraged to apply and should wait for epidemic prevention and control measures to end, the administration in Wuxi, East China's Jiangsu Province, said on Thursday.

The overall coronavirus epidemic in China is basically under control but the epidemic situation in many other countries  is still severe.