China takes the lead with a responsible polar travel initiative

"I once saw king penguins up close near the South Pole and this past summer I witnessed several grizzly bears in Alaska. Traveling to the world's most enigmatic regions is the most unforgettable memory in my life." 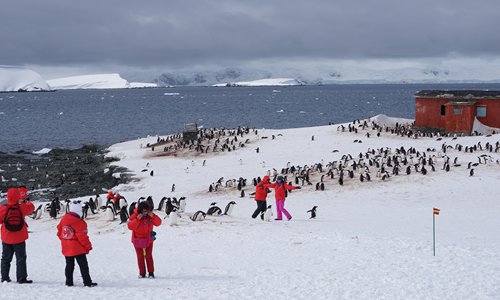 After ticking Belgium, Japan and another 20 nations and regions off his travel bucket list, 55-year-old Chinese traveler Luo Yongzhong told the People's Daily that he has continued his wanderlust to the two polar ends: the Arctic and Antarctica.
Although the polar regions can be bitterly cold and windy, there is something majestic about them unlike any other tourism attractions on Earth.
The stunning wilderness of enormous glaciers and adventurous kayaking on icebergs fascinates worldwide visitors like Luo. It's what makes them endure the over 30 hours of grueling flights to the two poles.
Unsurprisingly, the threat of melting glaciers has instilled a sense of urgency about ice melting and global warming, which has also turned polar travel into a kind of "last-chance tourism" experience.
Since trips to the polar regions were approved for general travel, a large amount of tourists have flocked to the world's most remote and exotic regions for unique vacation getaways.
In the tourist season of 2017-18 alone, a total of 51,707 travelers flew to Antarctica, 17 percent more than the previous season, according to the International Association of Antarctica Tour Operations (IAATO), an international organization that monitors and regulates travel activities in Antarctica. Its members include more than 100 Antarctica-bound outfitters.
"China has overtaken Australia to become the second biggest source of tourists to Antarctica after the US. From 2017 to 2018, Antarctica was visited by 8,219 Chinese travelers, which amounts to 14 percent of the global tourists to Antarctica, while US nationals accounted for 33 percent of the total number," said Wang Zipan, a researcher at China's Ministry of Natural Resources.
Pan Min, deputy director of the Center for Polar and Oceanic Studies at Tongji University, also pointed out that tourism in Alaska boomed in 2014, attracting more than 2 million travelers annually with 9 million holidaymakers to the Arctic on the whole. Pan made the comments at the conference "Polar Conservation, China Action" in Beijing on October 20, which was sponsored by WildBound, a Chinese civilian-based environmental education organization.
The upward trend in the visitor numbers recorded since the 2011-2012 period has continued till today, according to IAATO.
With the increasing amount of footprints in these pristine environments, however, there have been rising concerns about whether such travel is more harmful than beneficial, with some even arguing that the polar regions should be banned or restricted.
Along with the stringent safeguards already in place, "By implementing responsible polar travel, tourism to the two polar ends could be fine-tuned with an environmental protection strategy," said Chen Jiliang, the coordinator of Greenovation Hub, a Beijing-based organization that focuses on global environmental protection.
Liu Fubin, a former member of the Chinese expedition team to the two poles, echoed the need for responsible polar tourism. "I ask everyone who has ever been to the polar areas to join me, to become an environmental ambassador to save the world we love and respect the planet as well."
At the Antarctic Treaty conference in Beijing last May, close to a dozen leading polar travel agencies vowed to launch an initiative of responsible polar tourism.
"Tourists and tour groups should be required to minimize their impact in polar regions. At the same time, responsible visitor management and respect for native residents is what China will bring to the table in its nationwide policy on the polar regions," said Chen.
The publication of China's Arctic Policy and the nation's first white paper on China's activities in the Antarctic have marked China's frontline initiative in the polar regions, moves to enshrine China's determination in bolstering its responsible presence in protecting both poles.
China, as a "near-Arctic State," is an important stakeholder in Arctic affairs, according to its Arctic policy.
"To protect the Arctic, China will actively respond to climate change in the Arctic, protect its unique natural environment and ecological system, promote its own climatic, environmental and ecological resilience, and respect its diverse social culture and the historical traditions of the indigenous peoples," China's Ministry of Foreign Affairs said in January.
In the first white paper on China's initiative on Antarctica by the State Oceanic Administration released last May, China envisions the peaceful use of Antarctica, safeguarding the stability of the Antarctic Treaty System, elevating Antarctic infrastructure and support capabilities, enhancing scientific investigation and research capability, and calling for strengthened Antarctic environmental protection and coordinating global governance of the continent.
"China is willing to join hands with the rest of the international community … to facilitate the establishment of a more equitable and rational international Antarctic order, and forging the Antarctic community of human destiny," the white paper said.